During a broadcast on August 18, Twitch streamer ‘malena_tudi’ was playing Rust when she stumbled upon a player who she wanted to team up with, leading to a bizarre interaction that left her in tears of laughter.

Rust is a multiplayer survival game known for it’s harsh conditions and it’s ‘anything goes’ atmosphere which fuels players to do unsavory things. From nude cults, to griefing players, we’ve seen it all.

But when a female streamer was asking for help and wanted to team up with another player, the bizarre moment left her in a fit of laughter after she was rejected for the funniest of reasons.

The female streamer stumbled upon another player who ran towards her before she asked him for help. “Have you seen my hatchet? I lost it,” she asked, as the stranger immediately dropped her a salvaged hammer and a hatchet.

Malena then said “Oh thank fucking god!” before asking him “Where did you find it?” But the other player took off immediately, and ran around a corner. She followed pursuit, trying to get her question answered. 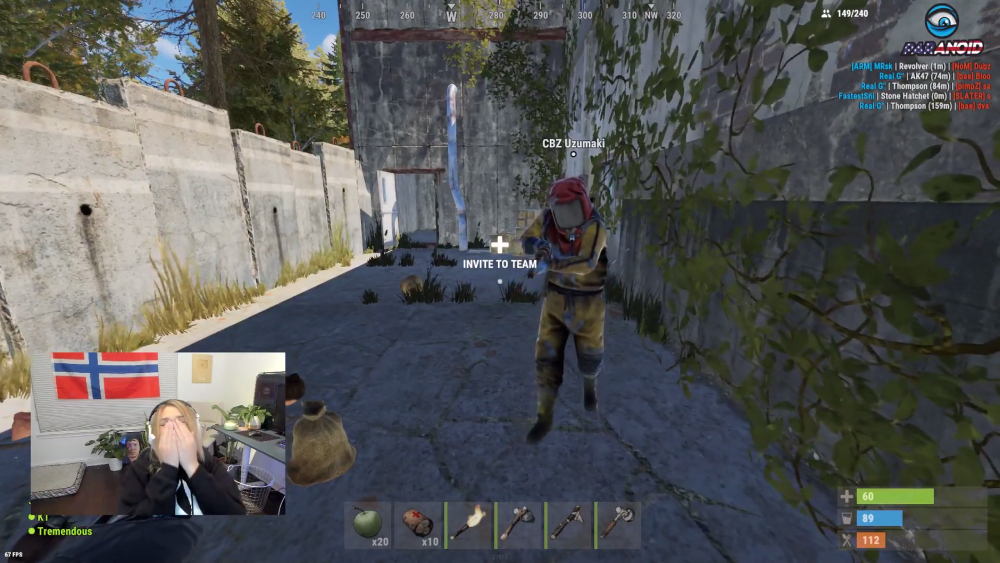 The streamer couldn’t stop herself from laughing after the awkward exchange.
[ad name=”article3″]

After catching up with the stranger, the streamer followed him into a gated area, which caused him to turn around and point his gun at her.

“Alright look, my girlfriend plays Rust with me, so I don’t want to be a dick” he said, after she tried to invite him to a team. “But if you don’t leave, I’m going to kill you,” he continued, before awkwardly looting then sprinting away from her into a nearby building.

The baffling moment led Malena to burst into fits of laughter, as would most people in her situation.

The female streamer then exclaimed “Oh my god! He can’t play with me. He’s not allowed to play with me! Oh my fucking god dude, Rust is a dating site!”

At least nobody can say he isn’t dedicated to his girlfriend.