Despite repairing their friendship after a tumultuous break up, Charli D’Amelio has confirmed that a reunion is not on the cards for herself and fellow Hype House resident Chase Hudson.

With a huge 110.9 million TikTok following combined, the two were a force to be reckoned with and seemed to be very much in love.

D’Amelio and Hudson were inseparable in the early days of 2020, but since their split D’Amelio’s platform has continued to skyrocket.

However, despite a seemingly amicable break up in April 2020, the perfect world they created all came crashing down in the week of July 6, as the two shared a furious war of words online that has come to be known as ‘Dramageddon’.

Now, D’Amelio is adamant that her relationship with Hudson is nothing more than friendship, and in a recent interview with The Hollywood Fix, she seemingly put those rumors to bed once and for all.

When asked if there was any chance of herself and Chase getting back together, she replied: “I think that we need to normalize exes being friends.”

So, to the disappointment of Chase and Charli shippers out there, it looks like the ship for any romance between the two of them has truly sailed.

Both of them have had a difficult time recently, with Hudson being forced to shut down rumours that he tried to take his own life while D’Amelio recently went public about her eating disorder.

The animosity between the pair started when she accused him of cheating on her with Nessa Barrett on Twitter after unfollowing him on various social media platforms.

When Howard tried to deny the claims, saying “All of this going on because I kissed Nessa while we were both single”, D’Amelio quipped in a now-deleted Tweet: “Then you shouldn’t have come to my house after without telling me.” 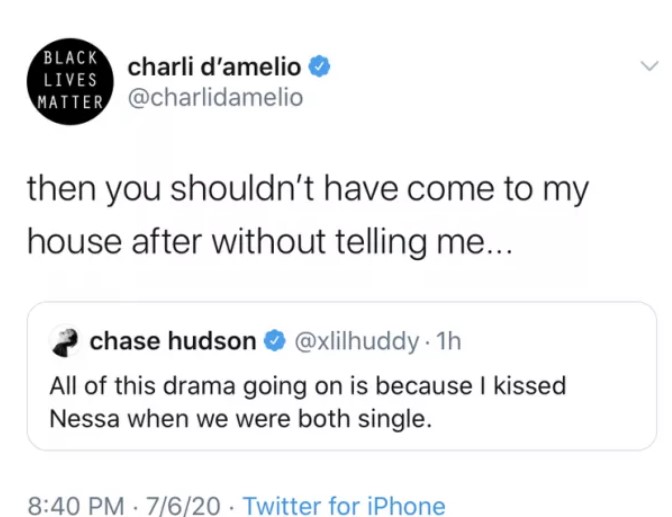 In response to these accusations about him going public, Hudson then proceeded to break the internet by laying out claims of infidelity against various other TikTok stars like Dixie D’Amelio, Griffin Johnson, and Jaden Hossler.

The two later retracted their claims and made peace with the other influencers involved, and since then it seems like they have taken steps to repair their relationship with one another.

In an interview with paparazzi at the end of July, Hudson revealed that he and D’Amelio were back on good terms and were hanging out again.

Meanwhile, D’Amelio reposted one of Hudson’s pictures to her Instagram story last month, which quickly sparked dating rumors between the two.

Charli D’Amelio sparked dating rumors with Chase Hudson in August after posting a photo of her ex-boyfriend to her Instagram story.

Ultimately, it’s great that these two are friends again so that they have each other to lean on in these struggles.