Viner-turned-internet superstar Kelvin “Brother Nature” Peña has issued an apology after a video of himself seemingly getting “jumped” went viral in early December — an incident that his “attacker” claimed the celeb instigated.

The net fumed with outrage after a video showing Brother Nature being assaulted by a man in a Miami restaurant circulated across social media, with the former Viner himself appearing to claim innocence in his Tweet on the subject.

“I know there’s a video out of me getting jumped, everyone in the pizza shop literally just watched, with their phones out, and did nothing,” he wrote of the incident. “Oh well.”

However, a subsequent interview with his “attacker” on KEEMSTAR’s “Drama Alert” told a different story, with the attacker claiming that Brother Nature had been belligerent, and even confronted customers in the restaurant for filming his antics when not offered as seat at a table.

“…he’s pulling down the chairs that have already been cleaned insisting that they let him sit there instead of at the bar, I guess because he felt too good to sit at the bar or something,” the attacker claimed. “He kept on arguing with the guy like ‘oh, do you know me?’ this and that.”

While fans and critics argued as to the legitimacy of this side of the story, a subsequent apology from Peña seems to prove these allegations true, as the star dubbed the incident a “lapse of judgement.” Sound familiar?

“I’ve taken time to reflect on my lapse of judgement and the impact of my actions, which I truly regret,” Brother Nature wrote. “My behavior was not consistent with who I am, what I believe in or how I was raised.” 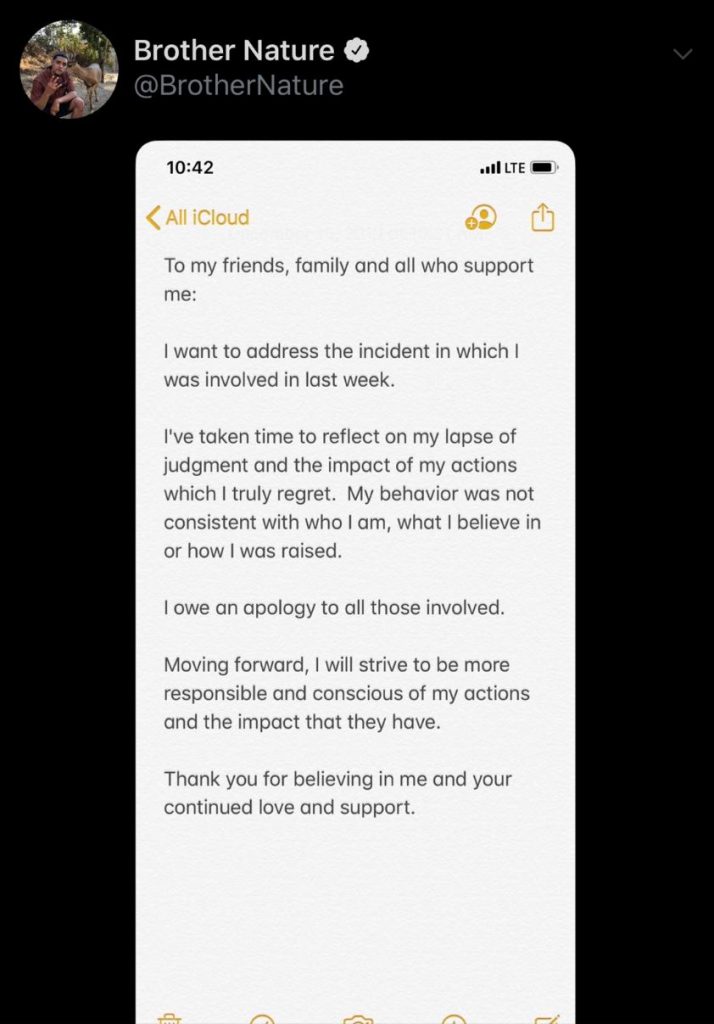 The celeb went on to claim that he will “strive to be more responsible” in his future endeavors — a promise that has since been deleted, with Peña’s post going missing just twenty minutes later.

Brother Nature wanna handle every animal except for the elephant in the room. https://t.co/0QtotgpBXa

Brother Nature lied about the fight?!? This too much! pic.twitter.com/8glzf0umCN

Despite deleting the post, screenshots of the Tweet still exist online — much to the largely mixed reactions from fans, who await further explanation for his apparent offense.