Boogie2988 goes ahead with charity stream for mental health after rescheduling

After this article was initially published, Boogie2988 went ahead with the charity stream after figuring out how to set it up, raising $3,500 which the famed YouTuber will be matching dollar for dollar. The information provided at the time of publication was, to the best of our knowledge, accurate. However, we would like to apologize for the delay in updating the post once circumstances changed, as well as the misleading title in which we incorrectly stated the stream had been cancelled, rather than simply delayed.

This article was originally titled “Boogie2988 under fire for canceling charity stream for mental health” and has also been updated.

Popular YouTuber and Twitch streamer Steven ‘Boogie2988’ Williams is no stranger to controversy, but now, the content creator is coming under fire for putting a halt to a good cause.

In fact, Boogie has garnered so many haters throughout his career that he claims these very critics are responsible for him pulling the plug on a charity stream he had planned to run for his birthday, which he would have matched dollar for dollar to benefit mental health organization ‘To Write Love on Her Arms.’

However, instead of going forward with the stream, Boogie later went live to explain that he didn’t want to be accused of misusing any of the funds, claiming that he didn’t know how to raise the cash without collecting it himself.

If you are interested in getting me a birthday gift I am down… please make a donation to @TWLOHA which is a great group that helps people with depression and suicidal thoughts.

If you are familiar with my recent struggles you will know why I picked them. They are awesome!

“Number one, I don’t know how to raise the money without directly collecting it myself,” he explained during a Twitch stream. “I don’t want people accusing me of stealing the money, so I’m waiting until I figure out how to do that.”

“Making up bullshit again, [a] simple Google search and you can find loads of ways of setting it up,” one commenter wrote of the matter. “This fucking idiot that will do anything to try and appease his fans, it’s so disgusting.” 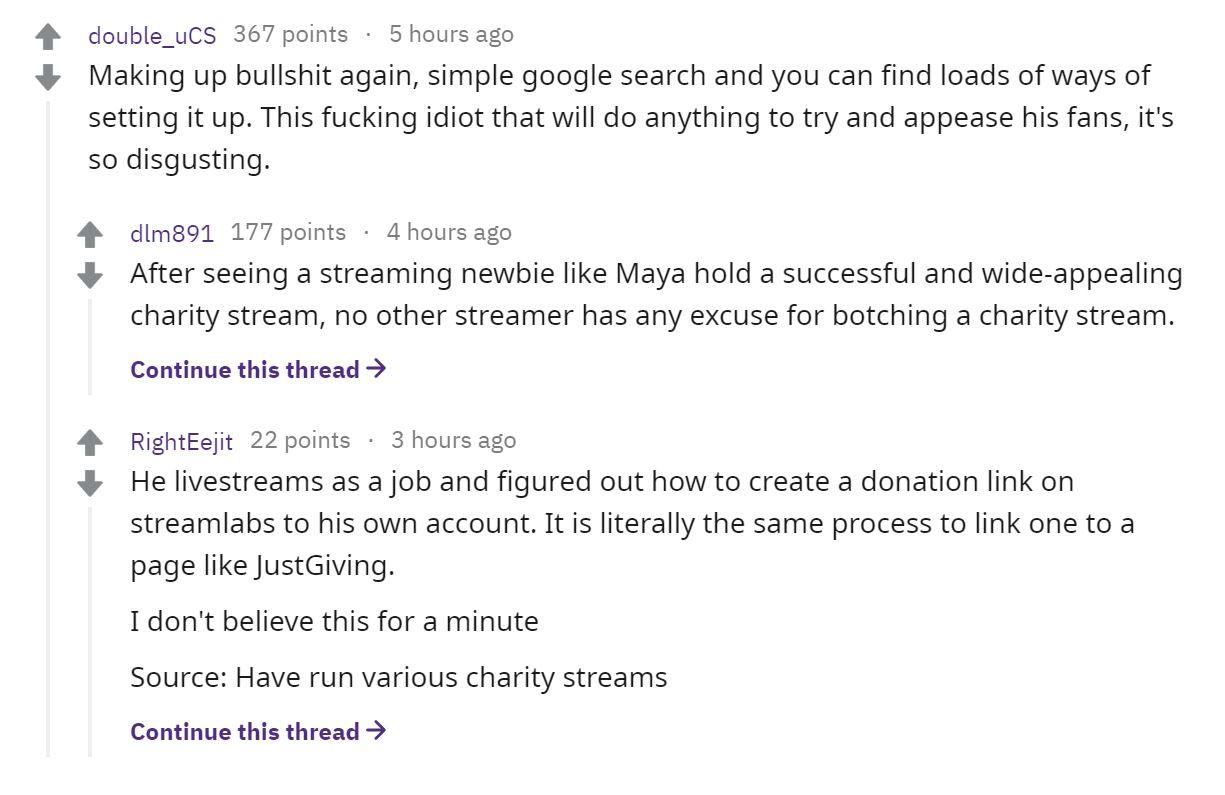 Reddit commenters were quick to take issue with Boogie’s reasoning for canceling his charity stream.
600https://www.reddit.com/r/LivestreamFail/comments/ch7911/boogie2988_says_he_doesnt_know_how_to_run_a/

“What happened to the charity stream?” another Tweeted. “Didn’t want to match every donation? Kinda figured it was all a lie lmao.”

What happen to the charity stream? didnt want to match every donation? Kinda figured it was all a lie lmao.

This latest scandal follows Boogie’s splurge purchase of a Tesla Model S in late June, which similarly saw mass fan outrage after the YouTuber appeared to “beg” for money after realizing just how much cash he’d spent on the vehicle.

While many critics pulled out a slew of receipts speculating just how much income Boogie actually makes, the YouTuber held that his “begging” was merely a joke in response to the backlash.

This would be far from the first time the YouTuber has dealt with such vitriol: Boogie even admitted that the widespread hate had made him “horribly suicidal” in a series of Tweets in early June, a fact that prompted him to initially schedule his charity drive, in the first place.

Those things are truly the opposite of who and what I am.
2/?

Boogie has yet to comment on the outrage concerning the stream as of publishing this article.