Amouranth under fire for allegedly reading Twitch chat while driving

Controversial Twitch streamer Kaitlyn ‘Amouranth’ Siragusa has found herself in hot water once again after potentially being caught interacting with her chat while driving, an action which is against the broadcasting platform’s community guidelines.

No stranger to the spotlight on Twitch, Amouranth is known primarily for her IRL streams where she often dances or cosplays for her audience.

While often pushing the boundaries on what is safe to broadcast on the platform, even being met with a recent, temporary ban, the streamer appears to have gone overboard in a new incident and potentially violated the Twitch community guidelines.

In an October 17 broadcast titled ‘date night with chat’, Amouranth positioned her camera inside of her vehicle and began driving towards a nearby restaurant.

Throughout the journey, she appeared to be seen taking her eyes off of the road in numerous instances in order to check on the stream and potentially read through her chat, a fact that her viewers quickly called her out on. 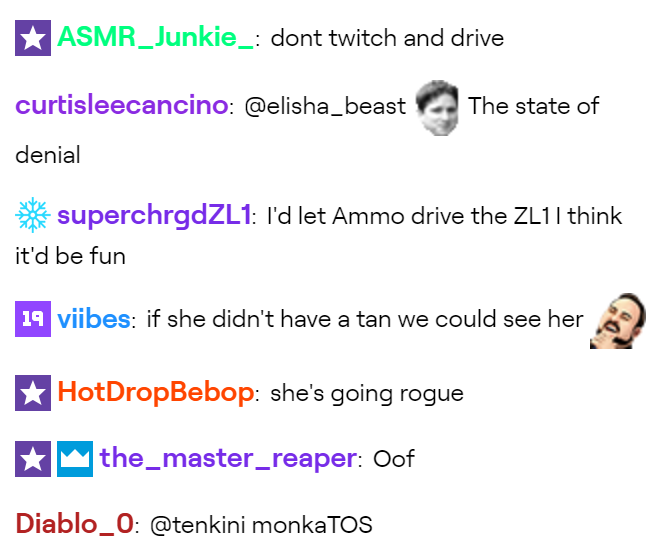 Viewers in chat pointing out the potential violation of Twitch rules.
600[ad name=”article3″]

The Twitch community guidelines explicitly address the act of streaming while driving. Livestreams from within vehicles are indeed allowed, however interacting with Twitch chat is labeled as ‘self-destructive behavior.’

“Any activity that may endanger your life or lead to your physical harm is prohibited,” the guidelines read. “This includes dangerous or distracted driving,” among a wide array of various activities that could be deemed harmful.

Obviously not the first time that the controversial figure has broken the Twitch community guidelines, Amouranth was recently banned for an NSFW wardrobe malfunction before being reinstated on the platform just three days later.

If Amouranth has indeed run afoul of Twitch’s community guidelines again, the violation could net her another ban, though fans and followers on social media were quick to make jokes that she wouldn’t have to spend along barred from the broadcasting platform.

Comment from discussion Only Clamouranth can IRL Stream and Read Chat while Driving.

With over a million followers on Twitch, Amouranth has been the source of much hostility in the streaming community of late, as fellow content creators have blasted the platform for double standards following her unbanning.

Despite her recent punishment, it seems the Just Chatting star can’t steer clear of controversy, or at least the potential for it, and this case may be no different.