Stuchiu: If PSG.LGD want to win TI10, they need a change - Dexerto
Dota2

Stuchiu: If PSG.LGD want to win TI10, they need a change

PSG.LGD needs to make some changes if they want to succeed at DOTA‘s The International 10.

Another International had come and gone. China once again failed to secure the coveted aegis. The closest team to reach those vaunted dreams was PSG.LGD as they got 3rd at The International 9.

With Xu “fy” Linsen taking a break for health reasons, PSG.LGD will be taking a break for the foreseeable future. In this time, they must consider what their goals are for the coming year. If they wish to contend for a TI victory, then they need to make a change.

A tale of two different PSG.LGDs

It is hard to swallow, but if PSG.LGD still yearns for a TI victory, something needs to change. To understand why we need to look back at what their current team has accomplished. Their lineup consists of: Wang “Ame” Chunyu, Mu “Maybe” Yao, Yang “Chalice” Shenyi, fy, and Yap “xNova” Jian Wei.

This is one of the most explosive and skilled lineups China has ever assembled. Ame is one of the best aggressive carries in the world. Maybe is still one of the best mids and synergizes perfectly with the aggressive style that PSG.LGD loves to play. Chalice plays the perfect sacrificial offlaner who creates space for his team. Fy was the best support player for the last year and a half. He is the best casting support in history and will go down as one of the greatest ever. xNova is an impactful aggressive five player with great vision and rotations. He and fy often set the pace and tempo for PSG.LGD’s games. 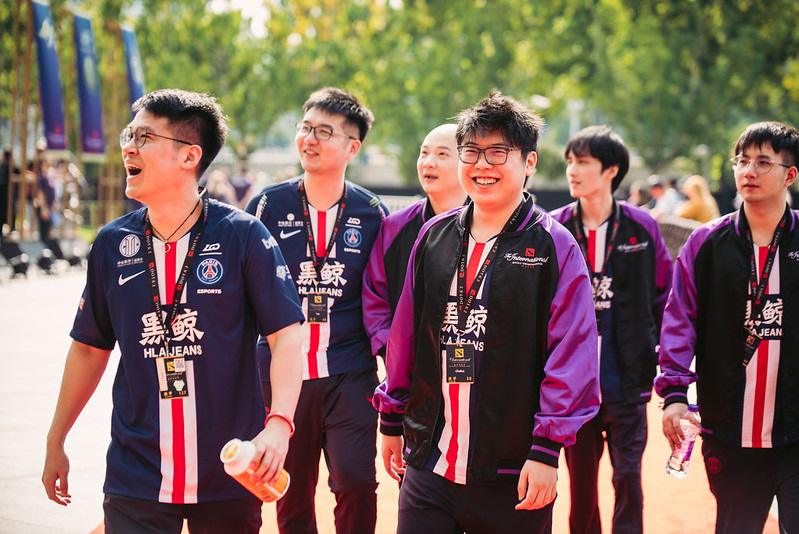 This five-man team rocked the world in the leadup to TI8. They got 2nd at Dota2 Asia Championships, won EPICENTER XL, won MDL Major, and got 3rd at the China Dota2 SuperMajor. In terms of raw form, they were the best team going into TI8. They looked better than either Virtus.Pro or Liquid. At TI8, only OG’s miraculous run stopped PSG.LGD. Their battles gave birth to the greatest TI series ever played (their upper bracket finals) and the best TI finals ever played.

If that was the PSG.LGD that was entering into the 2019-2020 DPC, then PSG.LGD should run it back. However the PSG.LGD in mid-2018 was different from the version I saw play in the 2018-2019 DPC. PSG.LGD played five Majors and one big LAN from TI8 to TI9. They got top 6 at the Kuala Lumpur Major, top 4 at Chongqing Major, top 6 at DreamLeague Season 11, top four at MDL Paris, 3rd at ESL One Birmingham, and 3rd at EPICENTER Major.

While the results are decent, they are a far cry from the peak PSG.LGD we saw in 2018. What’s more worrying though is the content of those results. The four best teams in the 2018-2019 DPC were EG, Virtus.Pro, Secret, and later on VG. They were the four elites who were a tier above the rest.

If you look through the results, PSG.LGD had a losing record against all four of them. PSG.LGD are 1-3 against EG, 1-2 against Virtus.Pro, 1-3 against Secret (with one 1-1 draw), and 2-2 against ViCi Gaming. The victories themselves aren’t the greatest when put into context. PSG.LGD’s victories against EG and Secret came in the group stages. PSG.LGD beat Virtus.Pro at MDL Paris, though Virtus.Pro had already qualified for TI by that point. One of their victories against ViCi came at Chongqing which was before ViCi became a real powerhouse on the global stage. 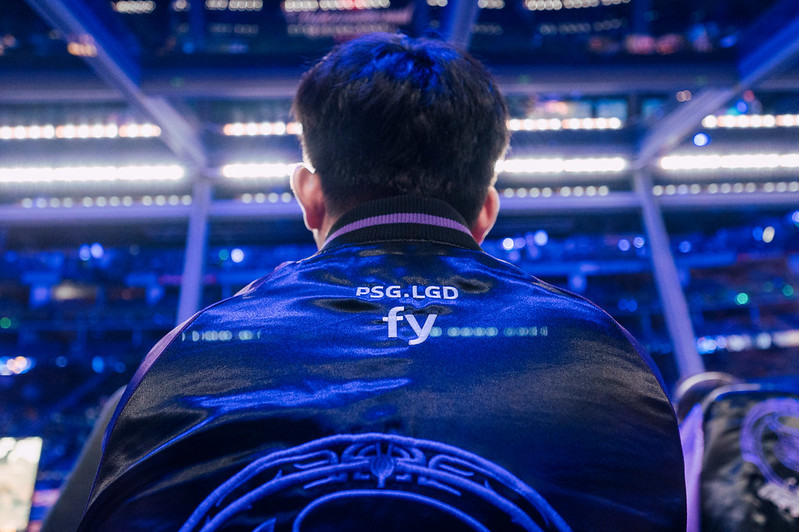 For that entire year, PSG.LGD wasn’t a dark horse squad. They might be good enough to upset one of those elite teams, but they weren’t consistent enough to actually win a tournament. The only exception to this rule was when TI9 rolled around. At TI9, PSG.LGD looked the best they had since TI8. Everyone was in form and they smashed their way through the tournament. They topped their group and then beat ViCi and Virtus.Pro in the upper bracket. They gave OG the closest series of the tournament in the upper bracket finals (which wasn’t that close), and then lost to Liquid in a close 1-2 loss in the lower bracket finals.

While the TI9 run was great in isolation, when taken in the context of the entire year, it’s likely the exception rather than the rule. It is unlikely that PSG.LGD will continue to maintain the form they had at TI9 and take that to TI10. The only team we’ve seen do that is OG.

Another reason PSG.LGD needs to make a move is because they’ve hit their time limit on this five-man lineup. Every line-up has an expiration date where the team has hit their ceiling. The best example of this is Liquid’s lineup from last year. The one with: Kuro “KuroKy” Takhasomi, Ivan “MinD_ContRoL” Ivanov, Maroun “GH” Merhej, Amer “Miracle-” Al-Barkawi, and Lasse “MATUMBAMAN” Urpalainen. The lineup lasted from Jan. 2nd 2017 to June 12th, 2019. They stuck together for 2.5 years and in terms of longevity, are the greatest lineup Dota2 has seen.

This lineup that had great internal chemistry, fantastic players in every role, and one of the greatest leaders in Dota2 history. Even this lineup couldn’t figure out how to transform themselves. KuroKy talked about this in an interview with RuHub, “The main struggle is that we are an old team and everyone just counters everything we do. We became obvious for them”

Liquid’s final runs together relied on miraculous teamplay they had built over their long period together. While it was awe-inspiring to watch, the level of execution that Liquid required to make deep runs were ridiculous. If they didn’t, they often fell out of tournaments early. They bombed out of DreamLeague Season 11 in 15-16th. They then made a miracle run to get 2nd at MDL Paris. They then had a mediocre run at ESL One Birmingham. This made Liquid realize they had to make a hard cut as they moved from MATUMBAMAN to Aliwi “w33” Omar.

PSG.LGD are in a similar position to where Liquid was back then. On paper, they have a fantastic lineup across the board, but the results were diminishing. As time goes on, those results will eventually fall flat if they do nothing. While it is hard, PSG.LGD needs to move forward and make a change if they want a top team capable of winning TI. 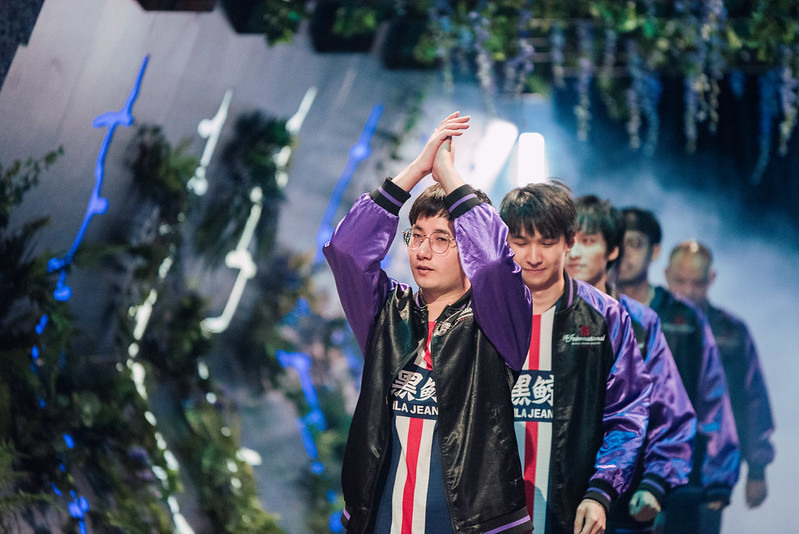 A Rock and a Hard Place

As I see it, PSG.LGD have two choices. They can either do a radical change where they swap out 2-3 players and revamp the team from scratch or they can try to upgrade their current style by making a single change.

Both scenarios run into the same problem though. If you look at each of the players individually, all of them do a good job. Ame and Maybe is a top three players for their positions in China. Chalice is the best offlaner in China and the only upgrade PSG.LGD could make for him is Daryl “iceiceice” Pei Xiang. Even that move would come with risks though as Chalice plays the perfect role for PSG.LGD’s style and it’s uncertain that iceiceice could do the same. Fy is the best support in the world. xNova is one of the best five players and an upgrade in the five position likely won’t upgrade their current roster or change the makeup/style of the team. 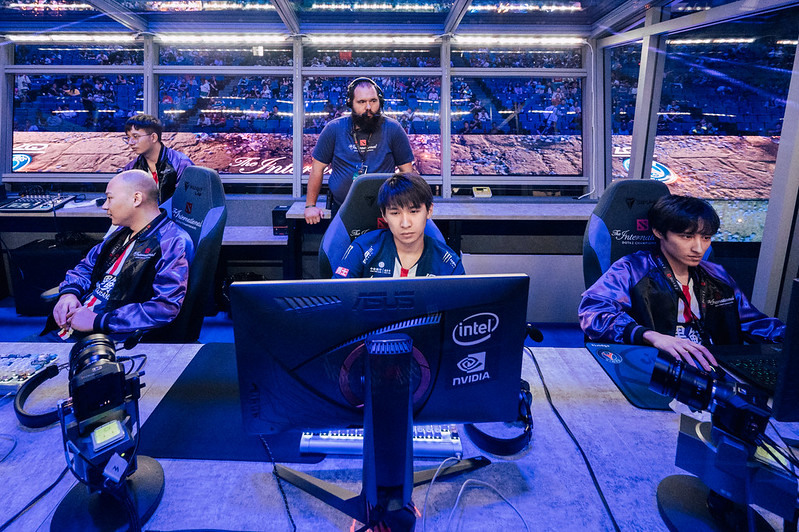 Given how good all five players are, it’s nearly impossible to pick out two to three players to revamp the team. If PSG.LGD want to make a single change to upgrade their roster, you have to look at the team holistically. PSG.LGD play an aggressive fast-paced style. I believe the core of that identity comes from Maybe, fy, and xNova. They are the ones who often set the tempo and pace of the PSG.LGD games, so they should be locked-in. Then it comes to Chalice and Ame. Chalice is the best offlaner in China and the only effective low-resource offlaner, so they have to keep him.

Ame is a top-two carry player in China, but his aggression has at times cost PSG.LGD big games. If there was any player change, he seems to be the only potential choice. Ideally, you’d want a consistent and versatile carry like Xu “BurNIng’ Zhilei back in his 2014 DK days. As of right now, the only carry player that fits that bill is Zhang “Eurus” Chengjun. The problem with Eurus is that he’s the superstar player for VG and it’s extremely unlike that VG would let him go. The only other option for PSG.LGD then is to gamble on a younger Chinese player, but the buyouts seem to be larger than ever and so it makes little sense for PSG.LGD to put so much money on such high risk.

Even so, if PSG.LGD wants to win TI, then something needs to change. The lineup they have is giving diminishing results. What’s more, the buyouts in China are getting exceedingly high. PSG.LGD are in a rock and a hard place. It is incredibly difficult to make a choice in such circumstances, but if PSG.LGD won’t make a move, then time will make a move for them. Competition waits for no one. All of the other teams will be making teams to win and if PSG.LGD doesn’t make a change, they will be left in the dust.