Diablo 2 Resurrected’s 2.4 update is set to add the Ladder, new Runewords, and make changes to Mercenaries and classes to the game. Here’s a rundown of everything that’s included.

Diablo fans have called and Blizzard have answered with Diablo 2 Resurrected’s 2.4 update. Players will finally be able to participate in the highly anticipated Ladder season, as well as test out some new Runewords to make their weapons even more deadly.

In addition to that, there’s a whole load of new balancing changes coming to both the game’s seven signature classes, and the hired Mercenaries who have left fans wanting more.

Looking forward to the update already? Here’s a rundown of everything you need to know about Diablo 2 Resurrected’s 2.4 changes.

The heroes of Sanctuary are back, and they’re better than ever.

When does Diablo 2 Resurrected 2.4 release?

Diablo 2 Resurrected’s 2.4 update is currently set to release early next year, implying that the changes will drop in the first couple of months of 2022.

Diablo 2 Resurrected finally gets a Ladder

As all OG Diablo fans know, the ranked Ladder season is an integral part of Diablo 2’s gameplay. Initially missing upon release, fans have been pleading with Blizzard ever since to add the highly anticipated feature. It seems like they’ve finally heard us.

Beginning next year, players will be able to partake in the new and improved Ladder, where a set of never-seen-before Runewords will be up for grabs.

For a full breakdown of Diablo 2 Resurrected’s Ladder, check out our dedicated guide, be rest assured it’s finally going to be in-game as of next year.

Diablo 2’s Ladder is officially back, but it’ll probably look a little more snazzy than the original!

Accompanying this exciting new addition to the game is a slew of class balance changes and updates to the game’s Mercenaries.

With classes remaining the same since “Patch 1.13c, which was released back on March 23, 2010,” each character’s kit has received a fresh lick of paint. While the Amazon and Necromancer are largely remaining the same, the Assassin, Paladin, and Barbarian are seeing some adjustments to their combat skills.

Additionally, the Druid and Sorceress‘ weaker elemental skills will be getting a much-needed boost of mana, and the former’s Summons are being made more deadly than ever before.

In terms of Mercenaries, the Desert polearm Mercenary of Act 2 has largely dominated as a follower, but Blizzard are looking to spread the load a little by giving their kits a bit of much needed TLC.

Below are the current adjustments courtesy of Activision Blizzard:

For the first time, players will have the chance to unlock a host of new Rune Words in the Ladder system! To be clear, these Rune Words have never existed in the game before, and they will not be accessible in non-Ladder play like the previous set of Ladder-only Rune Words in the original Diablo II experience. At the end of a Ladder season, players who successfully made these Rune Words will have their Ladder characters be moved into a “non-Ladder” version of the game. Then at the beginning of the next Ladder season, players will make a new Ladder character and start all over again to earn new rewards. Currently, we don’t have specific new Rune Words to showcase, but if you tune in to our Developer Update Stream (more details below) hosted by content creator MrLlamaSC, you’ll be able to receive a glimpse! 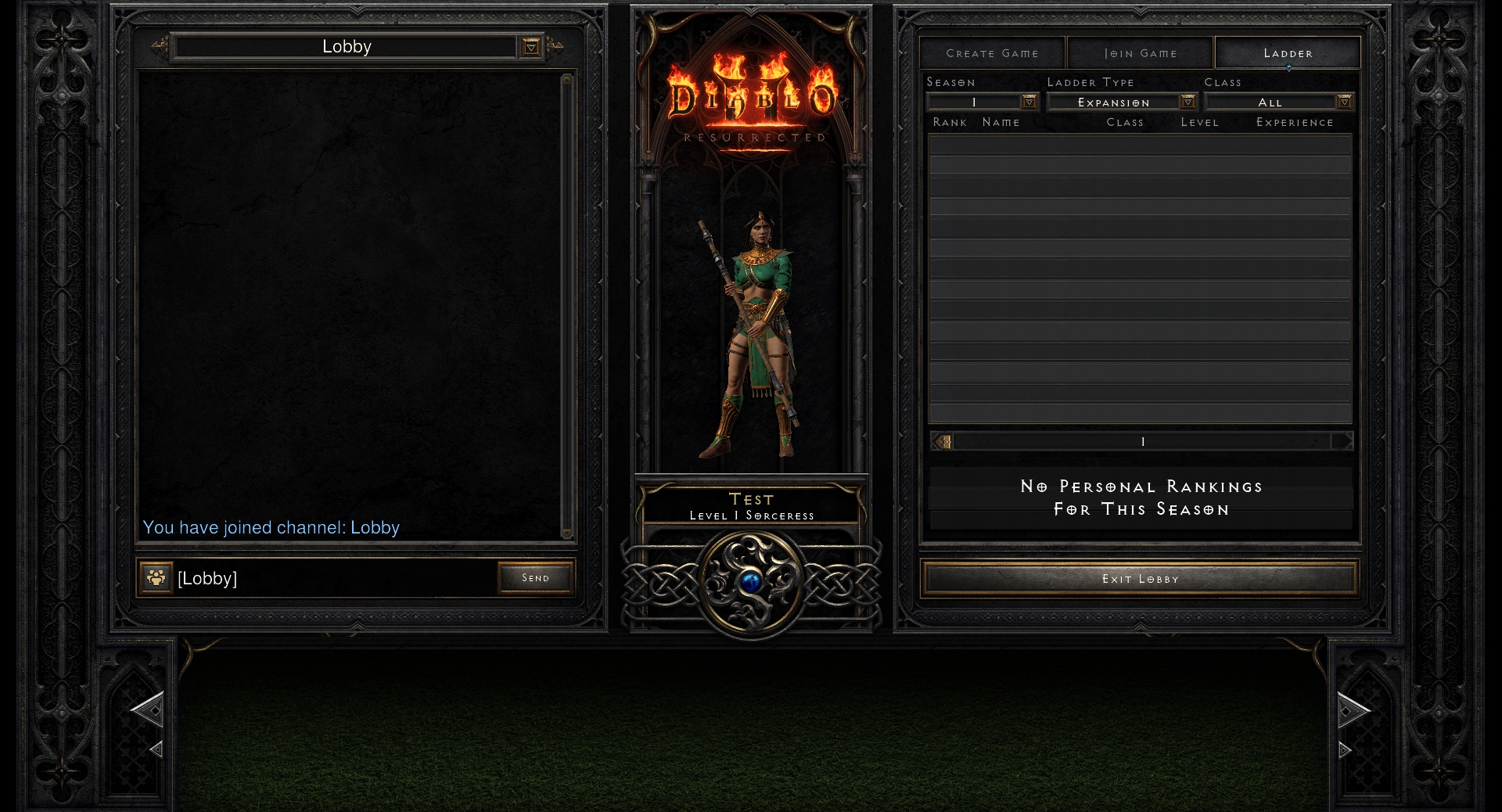 Lastly, we’ve been monitoring discussions around Ladder Rank play in the community. The duration of Ladder is an element our team is still trying to gauge as we progress forward, but we’re looking to create the “rush” of a new ladder and find the best timeframe for Ladder rotation that meets your expectations. Presently, we’re considering four months for Ladder Seasons. We’ll continue monitoring the community’s opinion and preference on this front as we approach PTR for Patch 2.4 early next year.

After so many requests from the community, we’re thrilled to share new balance changes are coming to your favorite heroes in Diablo II: Resurrected! As fans ourselves, we’re just as eager as you to find new ways to play. This is incredibly special, as the last patch to make balance changes to classes in Diablo II was Patch 1.13c, which was released back on March 23, 2010! Now, eleven years later, we’re making new changes to expand character build diversity, and retain class fantasy and speciality! These goals are crucial. We’re reviewing underused skills, assessing casting delays, making tooltip quality-of-life changes, and more to fulfil these goals.

We want to empower you to be creative with the builds you want to play, but we don’t want to “reinvent the wheel” and steer classes from their core purposes. Without diving into the specifics, let’s take a peek at the philosophies behind various Class changes.

The Amazon’s agility and versatility are profound. Generally, we like the current state of the Amazon class and believe her to be quite balanced. Nonetheless, we see an opportunity to improve the Amazon’s melee skills. We want to buff the strengths of certain underused melee skills such as Impale and Fend to give more reasons to use them. We are also looking into freeing up synergy requirements for melee skills to give more skill point freedom for other possibilities.

Additionally, we are also considering buffing certain skills in the Bow and Crossbow tree to help improve bow gameplay in higher difficulties.

The Assassin vanquishes evil from the darkness with great ease. However, for this class, we see an opportunity for the Martial Arts builds to shine brighter. Martial Arts skills can become increasingly challenging to perform in higher difficulties, so we are re-evaluating how to improve generating and spending Combo Points.

The brawn of the Barbarian is unmatched. Nonetheless, we see opportunities to add more diversity to Combat skills. We’re looking into adding more possibilities with Combat Skills such as Leap Attack and Grim Ward, while also re-evaluating skill synergy requirements to promote more reasons to spend points on certain Combat Skills.
Additionally, we think Throwing Barbarians can be more viable, so we are looking into enhancing the Double Throw and Throwing Mastery skills.

The bestial ferocity of the Druid makes all tremble. With that said, we see exciting opportunities to level up certain aspects of this class. From our perspective, Druid Fire skills are underperforming. We’re re-evaluating Casting Delays for Fire skills, exploring improvements to some of their Physical Damage components, and improving synergies. We’re also looking at potential tweaks affecting other Elemental skills that are underused. We want to improve the controls for Arctic Blast too, such as allowing more free form while channelling and no longer locking your targeting onto one enemy at a time.

Regarding Summon skills, we believe Summons are weak in high difficulty. On this front, we’re evaluating health gains per level, quality-of-life improvements, damage output, and new synergies for Ravens, Wolves, and Vines.

The commander of death sends his foes to an early grave. Like the Amazon, we like the current state of the Necromancer class. Nonetheless, we see an opportunity to improve specific Summons we believe are underused. We’re balancing elemental damages of Skeletal Mages and making lesser-used Golems more effective.
Additionally, we see opportunities for Bone skill improvements in high difficulty. We’re tweaking synergies on this front.

The wrath of the holy zealot is glorious. Despite this, we believe certain Combat skills are underused. We’re exploring ways to make lesser-used skills (I.e., Fist of the Heavens) more utilized, so players have more reasons to spend skill points to unlock these skills.

We also see an opportunity to scale Offensive Aura skills as well. This includes making improvements to AoE Damage auras to make them more effective at closer range. We also want to improve Thorns so that it can scale better and deal more reliable damage at higher levels.

There is no greater master of elemental magic than these mages. We’re very satisfied with the Sorceress’s current state, but we see a few of opportunities for improvements.

Regarding Cold Skills, we believe there can be more diversity with the armor skills (I.e., Frozen Armor, Shiver Armor, and Chilling Armor) for distinctive advantages.

We are also looking into adding more build possibilities around lesser-used Lightning skills by exploring more skill synergies.
Lastly, we’re also revisiting Fire skills, to improve underused ones, like Hydra. Similar to Arctic Blast, we’re exploring making player control improvements to the Inferno skill so that it is less clunky to use.

And we’re not done. Class Balance changes aren’t the only updates players want to see. We’ve seen a lot of feedback from the community around the subject of Mercenaries, and we are making improvements to Mercenaries in a variety of ways. Many players enjoy using the Desert Mercenary, and we want to give more reasons to use the other three mercenaries, so we are looking into improving their skills and stats to enhance their identity and fantasy.

New Horadric Cube Recipes, Set Item changes, and new Rune Words are on the horizon! New Horadric Cube Recipes being implemented will allow for upgrading the item quality of Set Items to give more item build possibilities. Set Item changes will update underperforming Set Items, to have more bonuses, giving players more incentive to pursue Partial and Full set items that can complement the skill changes alluded above. Lastly, new Rune Words will be added to complement the Skill and Mercenary changes coming in the update.