You can now see how much money you've spent on CSGO skins - Dexerto
CS:GO

Counter-Strike: Global Offensive players around the world have revealed how much they’ve spent on skins and here’s how you can check your spending.

CS:GO skins are incredibly popular in the game, with the majority of players having earned or bought a skin at some point during their play time.

They can drop from playing matches, be opened through the game’s loot box system, or bought on the market or through a third-party website. Most of the time if a player wants a skin their best bet is to simply buy it and some players have revealed just how much they’ve spent. 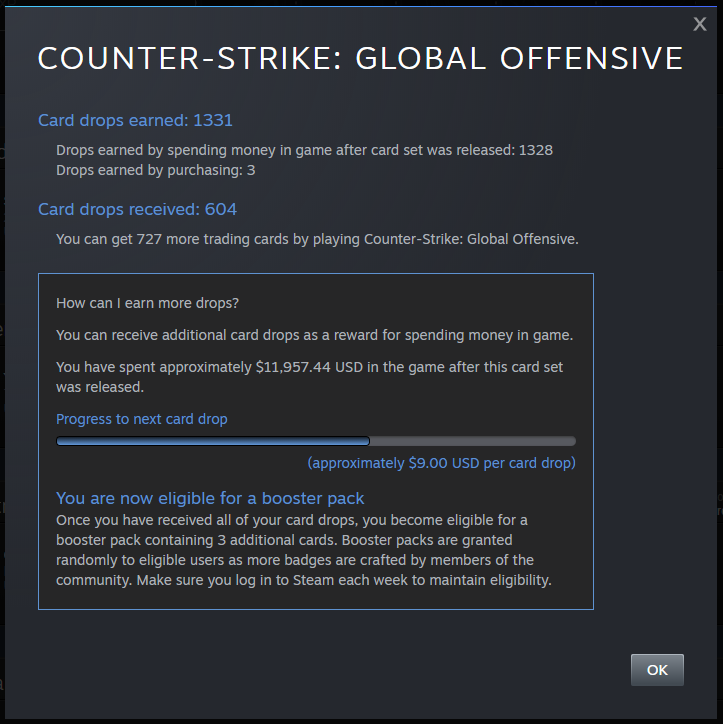 This screen shows just how much users have spent on CSGO skins.
500[ad name=”article2″]

A Reddit thread encouraging fans to show off how much they’ve spent quickly gained popularity, with the original poster dubbing the posts as “sad stories only”, starting off by posting his own spending’s, which add up to over $3000.

Other players quickly joined in, posting their screenshots, some players barely spent anything, while others may have spent a small fortune. A user named Her-Cat managed to dominate the competition, showing that they’ve spent an enormous $137,452 on the game. However, one user pointed out that this may not be entirely accurate, as it includes trading, where you could in theory keep spending the same $20 over and over to inflate the sum.

Comment from discussion How much did you spend on csgo ? sad posts only.

Regardless, it’s easy to see how players are able to spend large sums of cash on the game as some of the best skins sell for well over $1000, so who knows, Her-Cat’s record may even be somewhat realistic and the one to beat.

How to see how much you’ve spent on CSGO skins

Seeing how much you’ve spent on Counter-Strike is easy, although, if you’re an avid player, you may not want to see the results.

If you are up for it, however, all you need to do is open Steam or the Steam website, hover over your name and click badges, then find CSGO and click “How do I earn card drops?” There you will be able to find how much you’ve spent.

Hopefully, you won’t be too shocked by the number that comes up.