The First Round Matches of the FACEIT London CSGO Major Have Been Announced - Dexerto
CS:GO

The first matchups for the New Challengers Stage of the upcoming FACEIT London CS:GO Major have been revealed.

The highly anticipated $1 million event will kick off on September 5 and even the New Challengers Stage will feature some stellar talent (including the world’s number one team, Astralis).

Now FACEIT has revealed the first round match-ups, which include some Virtus.Pro vs NiP, Team Liquid vs OpTic Gaming and Astralis vs compLexity: 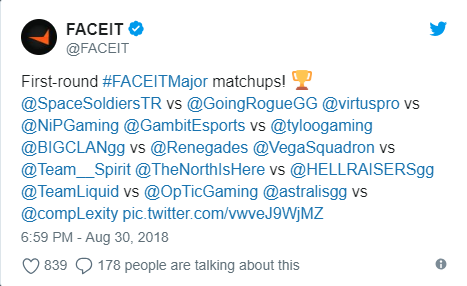 The New Challengers Stage, and the New Legends Stage that follows, will use a 16 team Swiss System format with the first four rounds features best-of-one games and the fifth round being a best-of-three.

The Buchholz system will be used to re-seed teams from rounds three to five in an attempt to make the matches less random and the top eight teams will proceed to the next stage of the competition.

The New Legends Stage of the London Major begins on September 12, with the single elimination Champions Stage starting on September 20. The Grand Final will take place on September 23, with the winners taking home $500,000.

The full list of matches for the first round can be viewed below.