Russel ‘Twistzz’ Van Dulken has given fans an update on his health, revealing that it has “gone downhill” recently.

The CS:GO star posted a TwitLonger statement on Sunday, October 21, providing details about his situation, stating that he hoped speaking about it would help to “relieve stress,” as he is mentally and physically in pain.

“I know being extremely stressed can cause pain and damage within the body,” Twistzz said. “I feel the pain inside, it’s affecting everything negatively, my sleep and just my life over all.”

Twistzz states that he recently discovered that he was sensitive to a lot of the food he was regularly eating, and says that his stomach is “pretty damaged”. VanDulken believes this is why his body isn’t healing, but is currently taking medicine to try and help with this issue.

VanDulken states that his current condition is stopping him from sleeping, and that he lies awake “with a strong feeling that something isn’t right,” but isn’t sure what is wrong with him. 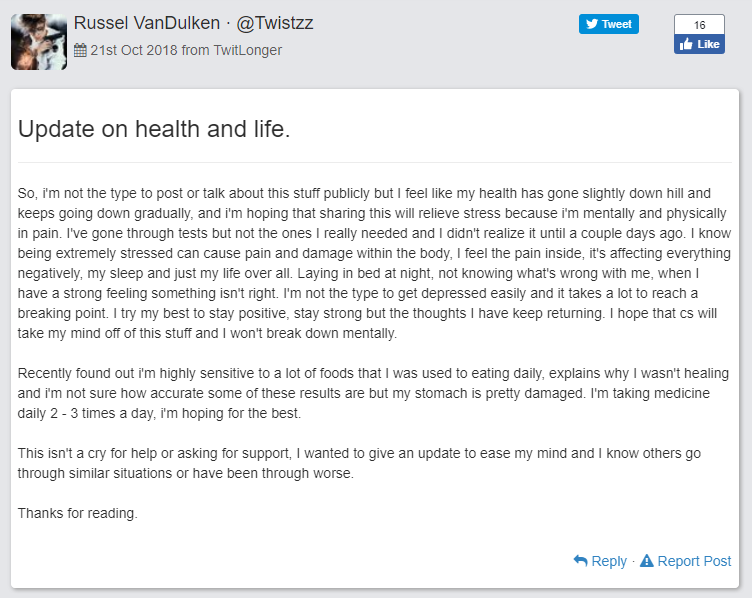 The Canadian has also undergone tests in an attempt to find out what is wrong with him physically. He says that he has found out that he is “highly sensitive” to a number of foods – something he believes has been harming him long term.

While Twistzz admits that he is not the kind of person that would get depressed easily, he’s hoping that his career in Counter-Strike: Global Offensive will help distract him as he tries his best to stay positive through this difficult period.