FaZe Clan CS:GO player Håvard “rain” Nygaard met with a young fan suffering from cancer, and made an incredible gesture he will never forget.

The meeting happened back in March of 2018, but screenshots of rain’s conversation with the young fan were posted to Reddit on August 16, spreading the heartwarming story.

The ‘Slaughter’ skin on the butterfly knife is a very valuable skin, and one rain is known for using, making it the perfect gift for the young fan.

The conversation between the two shows rain send him the trade offer for the knife, and the fan even responds ‘isn’t this the knife you use?’. 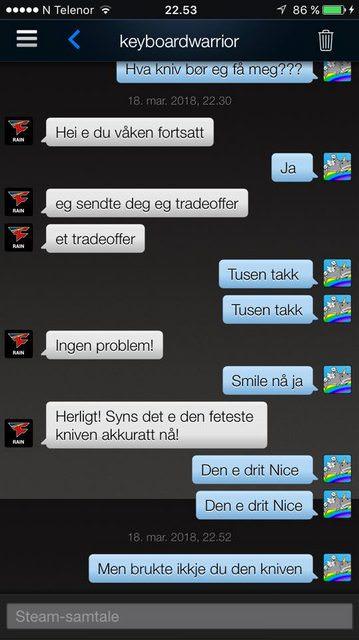 Fan: What knife should I get?
rain: Hey are you still awake?
Fan: Yes
rain: I sent you a trade offer
Fan: Thank you
rain: No problem!
Fan: I’m smiling now
rain: Wonderful! I think it’s the coolest knife at the moment!
Fan: It’s really nice
Fan: But isn’t this the knife you use?

Confirmation of the trade was also posted on Reddit, showing the fan secured the Butterfly Slaughter. 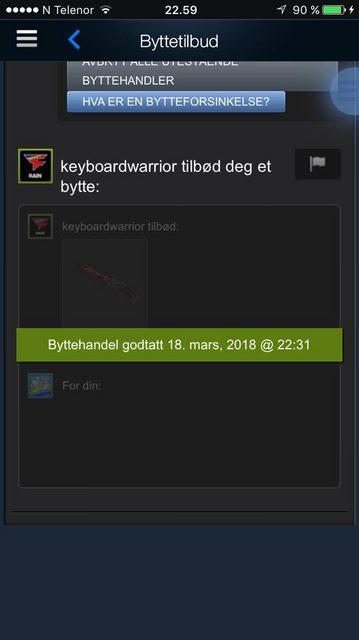 The knife usually trades for around $300-$500 if in mint condition, and is notoriously rare and desirable.

Rain himself didn’t publicize the gesture greatly, and its unclear how the images made it to Reddit, but he no doubt made the young fan very happy even as he suffers through cancer.

Other fans praised rain for the touching story. One Redditor said:

Wow, genuinely really cool moment. Props to Rain for stepping up without having to and being a standup guy. Hopefully this gets a little more attention and other pros from the scene can do more community work. Huge part about this becoming a more legitimate sport is community interaction and support.

Rain and his FaZe Clan team are some of the biggest stars in professional CS:GO, considered an all star lineup capable of winning the grandest tournaments.

They have a busy schedule coming up for the remainder of 2018, with DreamHack Masters in Stockholm on August 29, before travelling to London for the $1 million FACEIT Major on September 12.