Draken promises to perform brutal forfeit if Fnatic lose their next match at the FACEIT London Major *UPDATED* - Dexerto
CS:GO

Fnatic and draken managed to overcome Winstrike with a score of 16-7 on Inferno. This means that they now hold a 1-1 record and, more importantly, draken won’t be eating any shoes today.

If the competitive CS:GO scene has learnt one thing in recent years, it’s that saying you’ll perform a forfeit if something unusual happens is never good idea.

Following his team’s dismal first match at the FACEIT London Major, where they lost 16-4 to compLexity, the 22-year-old made a particularly bold statement about winning their second game:

“Playing vs Winstrike tomorrow, if we lose I will eat a shoe,” he said. 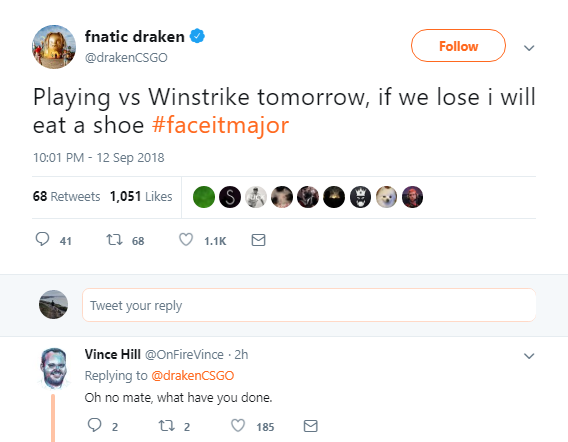 One of the first people to respond to the Swedish player’s statement was Vince Hill, the British commentator that fell foul of betting against the very same team at the ELEAGUE Boston Major in January.

Then playing under the Quantum Bellator Fire banner, the Winstrike players shocked the world by making it to the final eight of the prestigious competition – something that Vince had said was so unlikely, he’d eat a boot if it happened!

Vince would later decide that eating a boot might actually be bad for his long-term health but ended up performing a number of other forfeits in an attempt to make up for not sticking to his word! (Of course, that doesn’t mean anybody has let him move on.)

Of course, Vince isn’t the only one. FaZe Clan’s Håvard ‘rain’ Nygaard was so sure that Astralis would 3-0 Team Liquid in the ESL Pro League Season 7 Finals that he said he’d eat a cigarette if they didn’t.

Well, they only managed to win 3-1 and the Norwegian star ended up scoffing down a cigarette in an interview with ESL after the match!

With this in mind, and considering the pedigree of Winstrike when it comes to bets about eating footwear, we hope draken has a strong stomach!

Fnatic and Winstrike will meet in the second game of day two in the New Legends Stage of the FACEIT London Major. The team that loses will have a 0-2 record and be just one more game away from elimination.

When does Iron Trials ’84 return in Warzone?