A cosplayer by the name of Danielle DeNicola has mesmerized My Hero Academia fans on social media with her incredible recreation of the character Momo Yaoyorozu.

My Hero Academia is an immensely popular anime based on an equally popular manga. It has enormous potential for cosplayers, due to the wide range of characters who each have their own unique personalities, and powers called ‘Quirks.’

Momo Yaoyorozu is one such character who has a Quirk called creation, giving her the ability to produce non-living objects from her own skin. Besides her classic school uniform, she has an equally unique hero outfit that’s both cool and functional. 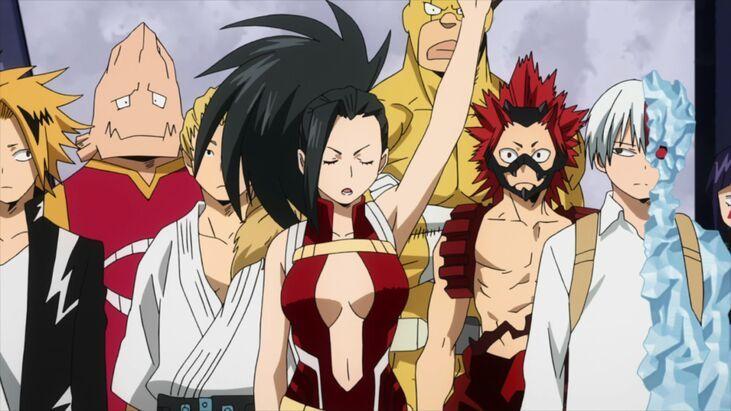 Danielle DeNicola is a cosplayer with over 600,000 followers on Instagram, who emulates looks from a variety of sources including Tomb Raider, Final Fantasy, and of course My Hero Academia.

In her stunning photos, she opted to replicate Momo’s hero look in a form-fitting red and white leotard, the zip in the center of the torso providing a functional and detail orientated addition to the original.

Her short beige skirt perfectly mimics Momo’s silhouette, in a shade that perfectly compliments the rest of her look. Her skin tone looks almost animated, illuminated perfectly under the bright blue sky in the background.

Someone call for a pro hero? ? @itsrobbiestark

And of course, Danielle is wearing the classic red boots that cover her calves, tying in the bright reds and sharp whites of the leotard. This is topped off with dark black hair tied into a spiky ponytail just like Momo.

People in the comments were loving it, user shell_on_a_trail saying “it feels like a CGI render but I know you’re real,” and gotopaka calling it “awesome and beautiful.”

The stunning look has already racked up 14,000 likes on Instagram, as well as another 7000 on Twitter. Certainly a great outcome for this uncanny Momo recreation.