Professional Call of Duty player Donovan ‘Temp‘ Laroda has hit out at Luminosity’s Carson ‘Brack’ Newberry, labelling him a “fucking shit can” in a war of words on social media.

The Splyce pro first responded to a seemingly innocuous post from Brack on July 9, where the LG player had asked whether a Nighthawk router would help him play like ‘Huke Skywalker’ (referring to Temp’s Splyce teammate, Cuyler ‘Huke’ Garland.)

Temp’s reply, “you fucking suck brotha man” didn’t immediately draw a response from Brack, but when a fan reminded him that Luminosity had beaten Temp and Co. during their most recent League match, Brack weighed in: “That’s what I was thinking.” 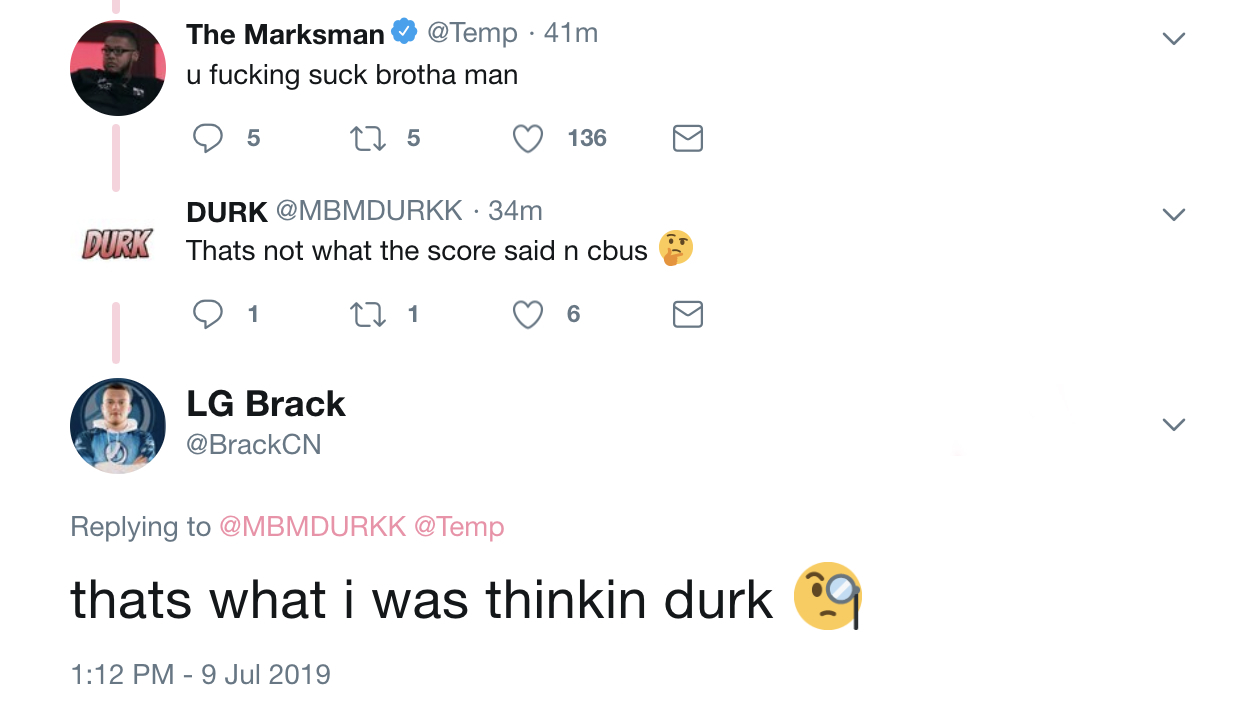 Temp hit right back, labelling his fellow pro player a “fucking shit can”, and reminding him of his LAN records for most damage in the Black Ops 4 season, while dismissing LG’s win over Splyce as little more than a meaningless league match.

Loroda also suggested Brack was guilty of ‘baiting’ his teammates for the sake of his personal stats – an issue 100 Thieves’ star Austin ‘SlasheR’ Liddicoat was vocal about days prior.

“LEGIT ALL TIME DAMAGE RECORD vs your garbage ass at an EVENT,” Temp wrote. “Stop baiting your team and (challenge) someone for once you fucking shit can.” 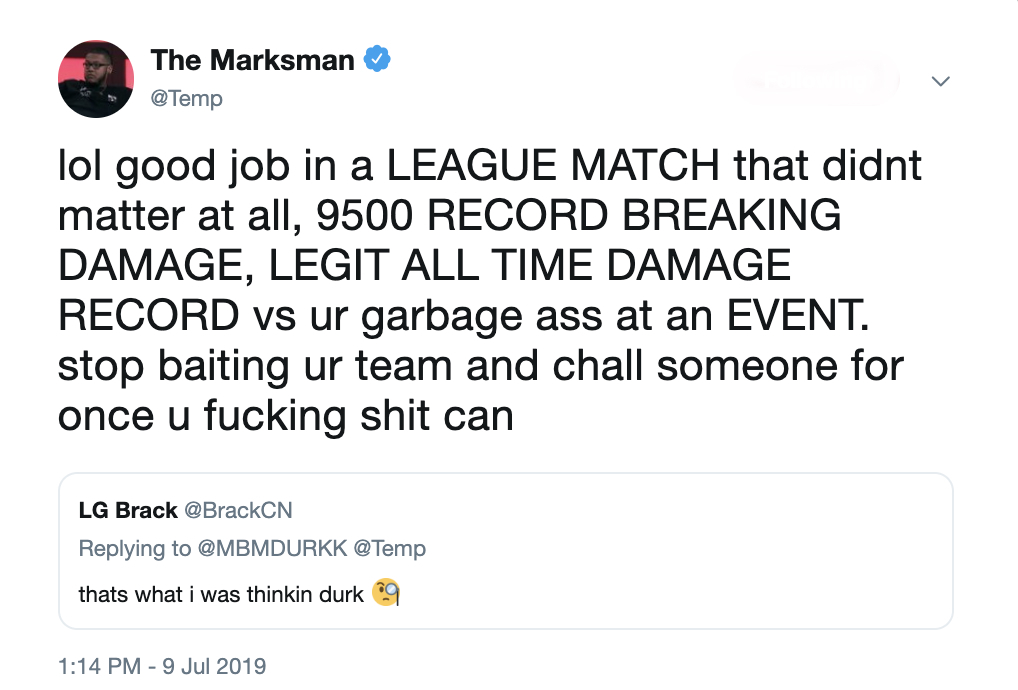 Temp went on to reiterate that he believes Brack’s impressive individual stats are down to selfish gameplay, “baiting his teammates”, and telling his fellow pro to “get better shitter”, so that LG’s Josiah ‘Slacked’ Berry can qualify for playoffs.

FormaL joins in defense of teammate

Brack’s Luminosity teammate Matthew ‘FormaL‘ Piper came to his defense, but Temp went on to claim that their win over Splyce was only granted because he wasn’t trying, instead ‘throwing them a bone’.

Temp argued that in his younger years as a ‘developing’ player, he was more easily beaten by top pros, but is now in his prime, and even a World Champion like FormaL “cannot fuck with me”.

He also accused Brack of starting the confrontation with his jab at Huke over internet connection and the use of a router: “his fan boy ass trash can shouldn’t (have) said shit.” 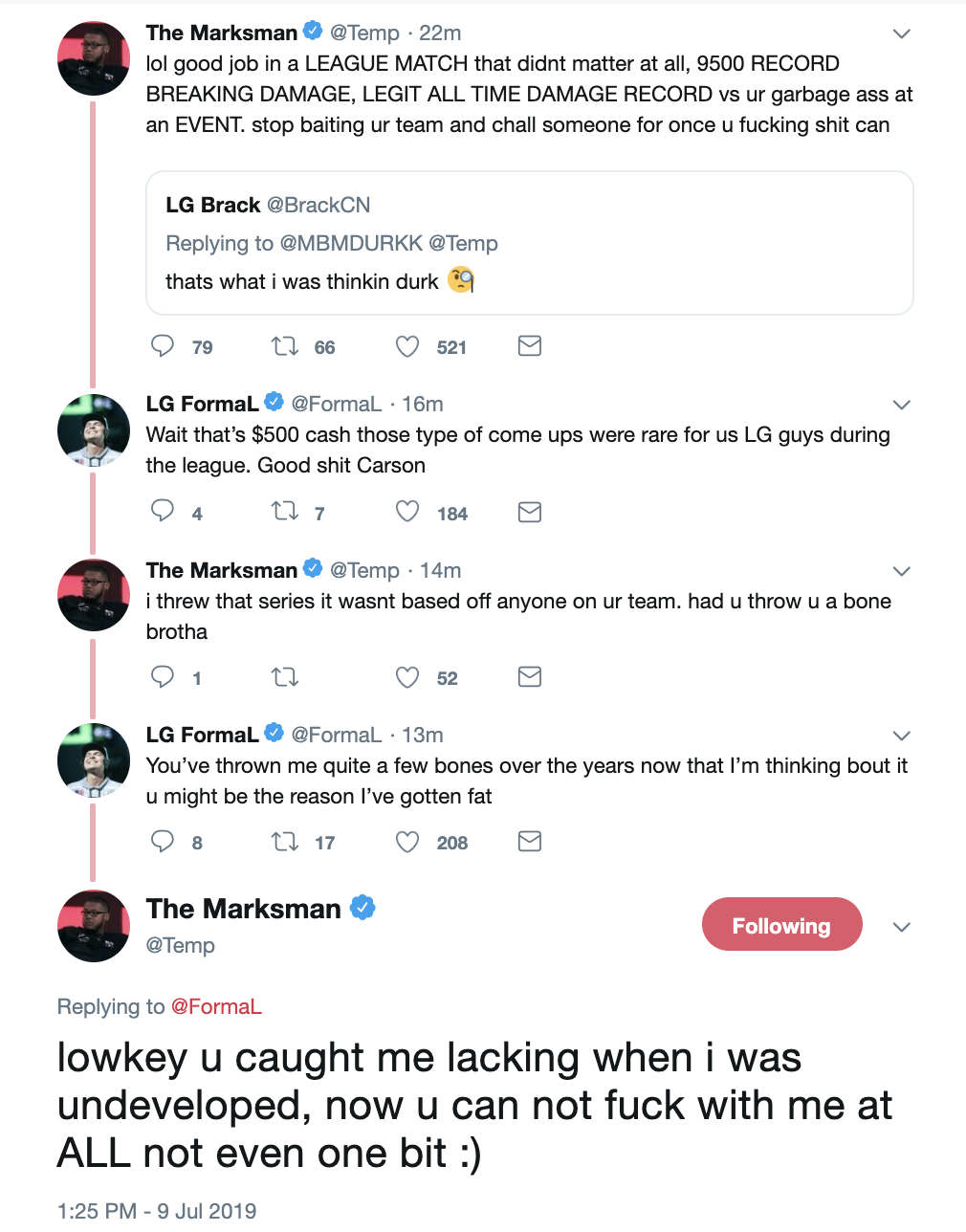 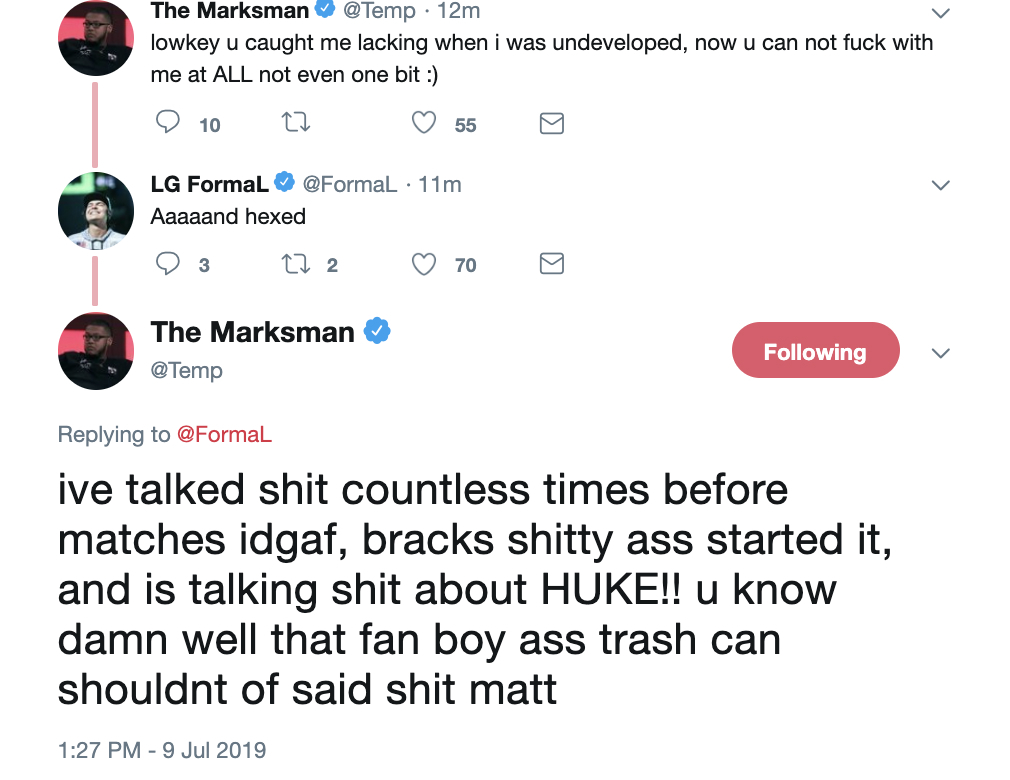 The debate wasn’t over though, as FormaL attempted to nuetralize the situation by suggesting Brack wasn’t being serious in his initial post, and that Temp had overreacted.

Temp wasn’t hearing it though, doubling-down that Brack was “trash” – and that FormaL would eventually agree “when you drop him in a few months”.

Later on July 9, Brack’s father, Archie Newberry, hit back at Temp, appearing to mock the pro player’s weight – to which Temp was understandably incensed by.

Responding, Temp continued to lay on insults towards Brack, while suggesting his father looked ‘weak’ in his attempt to defend his son. 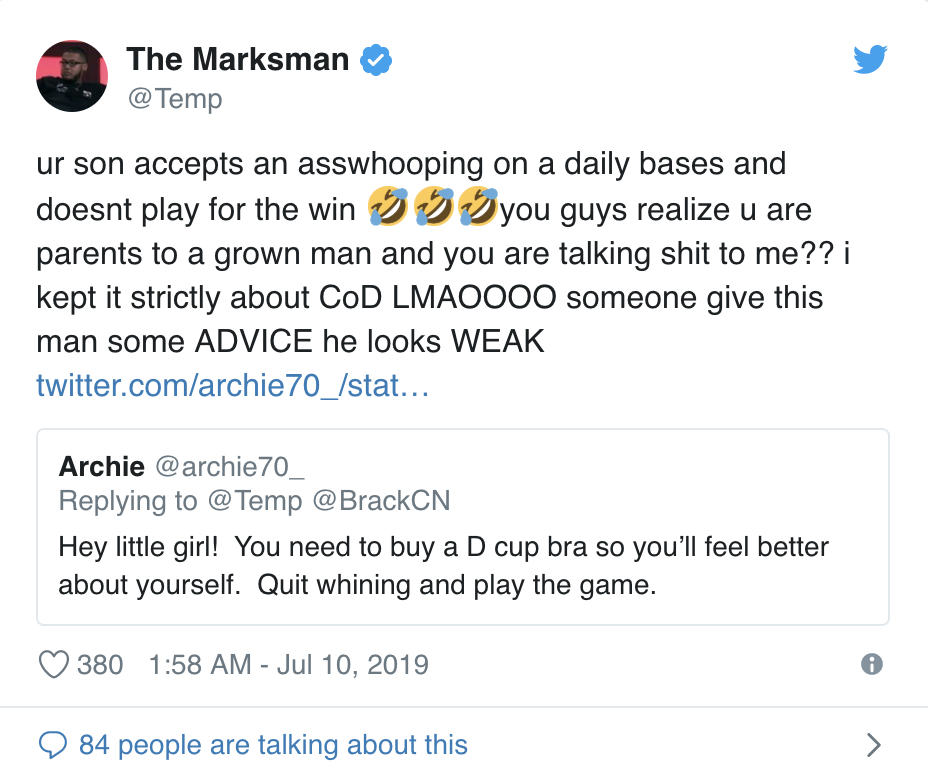 Unrelenting, Newberry responded again, labelling Temp’s attidute “toxic”, and that as such he was holding back his team, ending his message with “basically, you suck!”

Keeping it short, Temp fired back by stating plainly that he possesses ’10 times the talent’ of Brack. 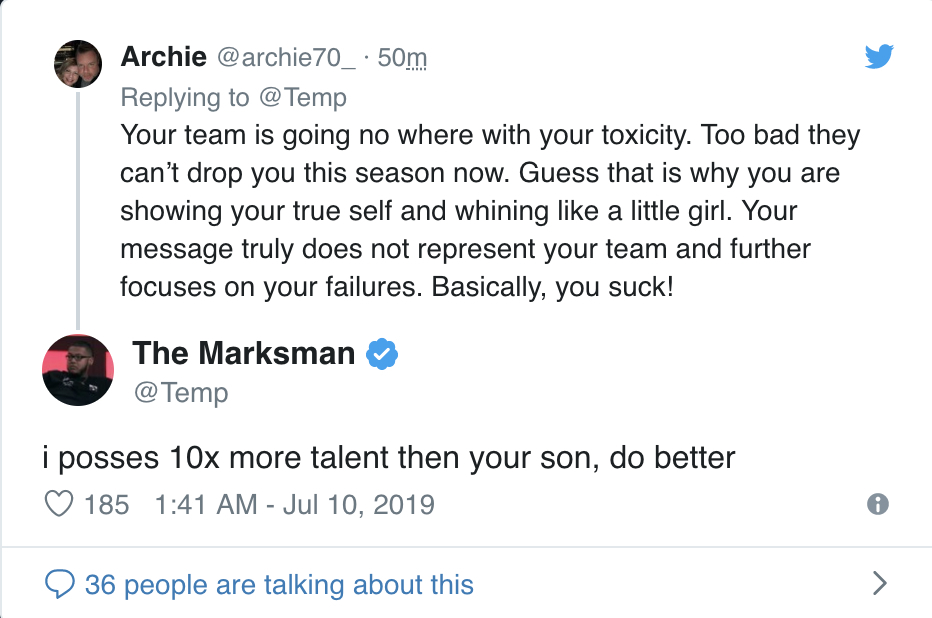 All three players, Temp, Brack and FormaL, will have the opportunity to put their words into action at the CWL Finals in Miami – but only if Luminosity can qualify for the event through the Play-In tournament.

Temp’s Splyce are already qualified for the $1.25 million event, with a whopping $500,000 up for grabs for first place.