Splyce announce that their pro Halo team will also compete in CoD World League, but there's an issue - Dexerto
Call of Duty

Splyce announce that their pro Halo team will also compete in CoD World League, but there’s an issue

In a surprising announcement, Splyce have revealed that their pro Halo team has been approved to also compete in Call of Duty.

According to the org, their Halo team, which currently competes in the Halo Championship Series, would simultaneously participate in the CoD World League.

Splyce’s Halo roster, which features Jonathan ‘Renegade Willette, Anthony ‘Shotzzy’ Cuevas-Castro, Braedon ‘StelluR’ Boettcher, and Kevin ‘Eco’ Smith, is arguably the strongest side in the world, as they have won the last three major tournaments they’ve played in, including the World Championship in April.

“Splyce’s Halo roster will compete in both HCS and CWL in 2019,” the org posted on Twitter. “Both leagues have approved this historic decision. We’ll have more to discuss soon.”

They also posted an image that included all four players and a blank spot for a fifth, which they would have to fill in order to meet the new five-man CWL format.

This announcement was met with great surprise and confusion among many, and for several reasons.

For one, some pointed out that Shotzzy is currently 17 years old, which would fall short of the requirement that all competitors at CWL sanctioned events be at least 18 years of age.

Even MLG executive Adam Apicella replied to the tweet, making it clear that Shotzzy’s age would indeed be an issue. 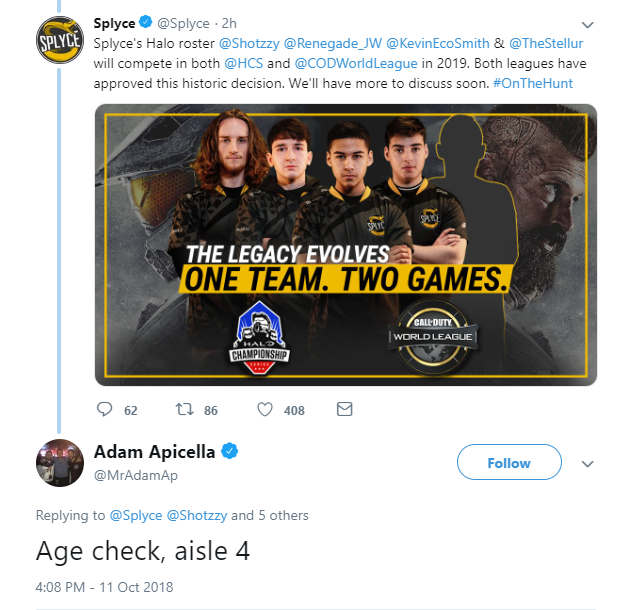 To clarify upon their original announcement, Splyce later released a follow-up tweet acknowledging the age dilemma.

“Full disclosure: Yes Shotzzy must come of age first (18) before he can start competing,” they tweeted. “But he will be turning 18 next year. He is not allowed to compete at 17 per CWL rules.”

However, they did not make it clear as to whether they would wait for his birthday, or they would find a temporary replacement that would play for him at CoD events.

Another potential issue which could arise from this development has to do with the fact that Splyce already have a dedicated CoD team, which they recently revamped with four new players.

It would be very interesting and curious to see what would happen should Splyce’s two teams come up against each other at an Open event during the upcoming season.