According to a tweet posted by the Spanish retailer, the beta will be live until September 17 for all platforms, despite the fact that the start dates will be different.

Here is the tweet, with a rough English translate provided above it.

We are now testing # CODBlackOps4 in # GAMEscom2018 and take the opportunity to remind you that the BETA dates of # BlackOut are already known : September 10: PS4. -14 September: Xbox One. -14 September: PC. They will last until September 17. 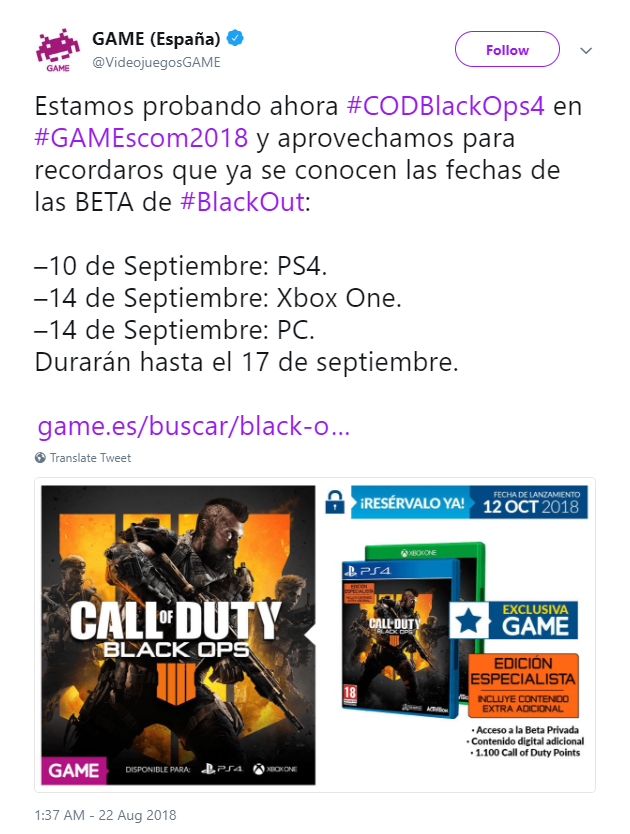 GAME Spain is the first credible source to report a set date when the Blackout Private Beta will end.

Although the start dates for the various platforms had been previously announced, the end date was never officially revealed or confirmed by Activision.

If the information above proves to indeed be true, PS4 players will get a whole seven days to play the Beta, while players on the other platforms will only get four.

As mentioned above, the Beta will be private, meaning that players will need a special code that can be obtained by pre-ordering any version of the game.

However, the PC version will only be private on the 14th and will turn into an open beta starting the 15th.

Those who were able to play the Black Ops 4 Private Beta earlier in August will not need to get or do anything additional, as the file will automatically turn into the Blackout Beta on the day of launch.