The global reveal event for the multiplayer side of things in Modern Warfare took place on August 1, finally giving fans a taste for what they can expect once the game launches on October 25.

Shroud was one of the several top streamers and YouTubers that were invited to participate in the gameplay portion of the presentation.

Many were looking forward to seeing the former CS:GO pro in particular try out the game, since Modern Warfare is fully cross-platform and he would be using his trusted mouse and keyboard.

And he did not disappoint, pulling off a remarkable clutch play that not only excited everyone in the room, but also again showed why the streamer is widely considered to be one of the best FPS players in the world. 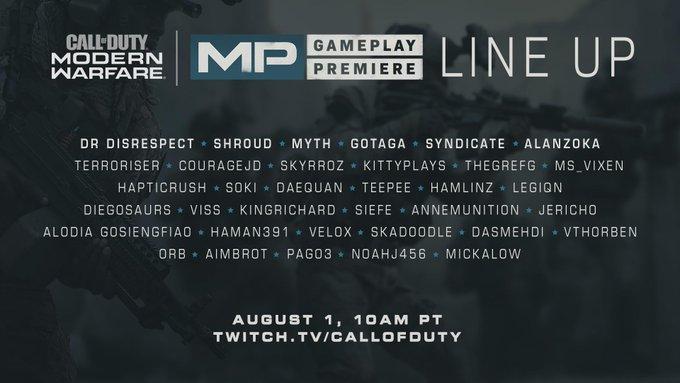 Shroud was among numerous popular streamers and YouTubers at the Modern Warfare reveal event.
[ad name=”article3″]

Playing the brand new 2v2 Gunfight mode, shroud found himself in a precarious situation after his teammate Skadoodle was eliminated and he was left with just 10 health points, in a mode where health does not regenerate automatically.

With throwing in the towel never being an option, he helped level the playing field by quickly blasting Jericho with a shotgun, turning it into a 1v1 fight, albeit still with a strong health disadvantage.

Turning his attention to the remaining opponent, shroud was able to grab the high ground, giving him a view of virtually the entire map.

It was then when he spotted the opposition, quickly snapping in his direction and hitting an insane no-scope, giving him the round victory and completing the unbelievable clutch.

As expected, the play led to a massive reaction from those who were watching, including shroud himself, who was very excited and proud about his in-game heroics.

After the final kill, Jericho, the popular content creator who found himself on the wrong end of the clutch, could be heard bellowing “why did you put me against these people?!”

The official broadcast crew who were handling Call of Duty’s stream were also pretty blown away by the play, and their reactions too were very much of the same nature.

Players will get their own chance to try out Modern Warfare multiplayer pre-release during the upcoming beta sessions, which will not only be open to everyone on all platforms, but will also feature cross-play.

The full game is scheduled to be released on October 25, 2019 for the PlayStation 4, Xbox One, and PC.