Austin ‘Pamaj’ Pamajewon has an idea to give the ‘storm’ effect in Blackout mode a unique Black Ops flair.

The OpTic sniper would like to see zombies take a starring role in the storm.

In order to force the action in Battle Royale games, there is usually a mechanic where the map gets smaller over time.

PUBG features an electrical storm that will damage players caught in it, while Fortnite also has a ‘storm’ to damage players. Players must get closer and closer together with storm mechanics, solving the issue of a playing area that is significantly larger than regular shooters.

For Call of Duty’s upcoming battle royale mode Blackout, there is a possibility for an all new mechanic featuring zombies. 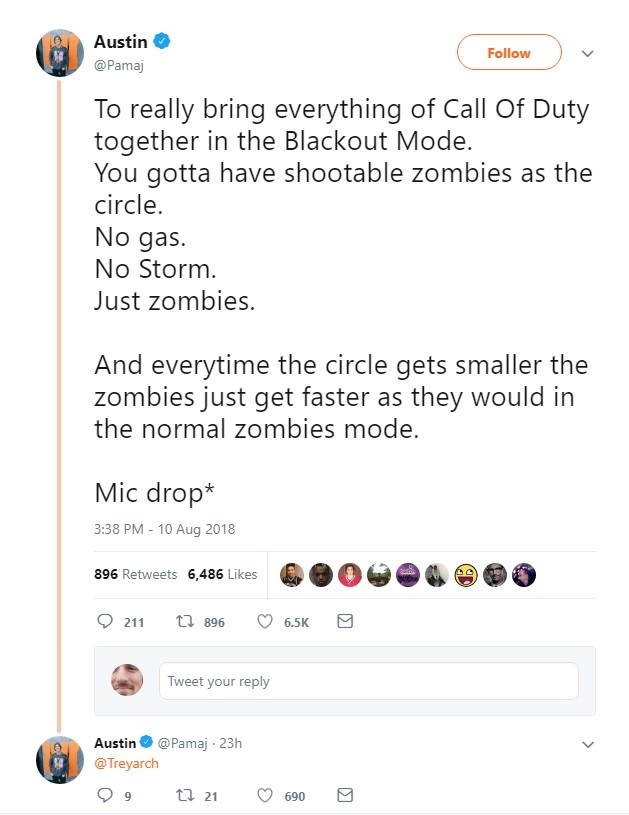 Instead of an environmental effect that automatically damages players, Pamaj wants to see the outside of the ‘circle’ loaded with zombies that get faster as the match goes on.

Treyarch may have issues figuring out how to get close to 100 players and thousands of zombies on a map without performance suffering, but Pamaj is certainly on to something.

The Call of Duty: Black Ops 4 Beta is multiplayer only for August, leaving out the highly anticipated Blackout.

Treyarch has not confirmed many details about the mode, leaving many to speculate how a Call of Duty battle royale would work.

One detail that is confirmed is the presence of bullet drop for Blackout; the ballistics are also making their way to the multiplayer part of Black Ops 4.

Players will not have to speculate much longer as Blackout will get its own beta in September.