After getting a chance to try out the Private Beta of Call of Duty’s new Blackout battle royale mode, OpTic Gaming content creator Jack ‘CouRage’ Dunlop has given some constructive feedback.

As with many others in the community, CouRage’s main contention with the Private Beta was that some of the in-game Armor was way too strong and over-powered.

The way Armor currently works in the beta is that there are three levels that players can pick up, each awarding an increased amount of protection over the health the player already has.

Here are the changes that CouRage proposed for Treyarch to implement in order to make Armor more balanced:

How to make Armor in Blackout better:

I think it’s safe to say Armor is everyone’s biggest complaint after day one. Hoping for changes! 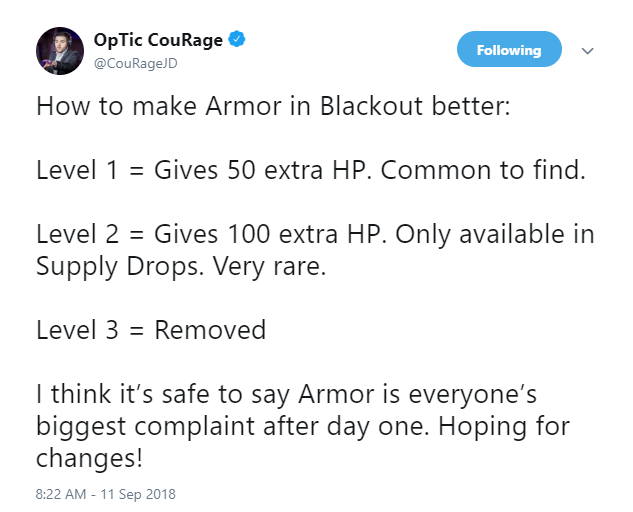 Several hours after this post, Treyarch Game Design Director David Vonderhaar announced that they have heard the feedback about Armor and that there are changes coming soon to further balance it, some of which may incorporate what CouRage had proposed.

Aside from Armor, CouRage also made a point to bring up footsteps, and how the current sound balancing makes close quarter situations in Duos and Squads modes more hectic since no one knows whether nearby footsteps are from a teammate or enemy.

Next improve needed in Blackout:

Teammates footsteps need to be 80% quieter than they currently are. No way to tell where enemies are coming from when teammates are stomping around. Would make duos/squads 10x better. 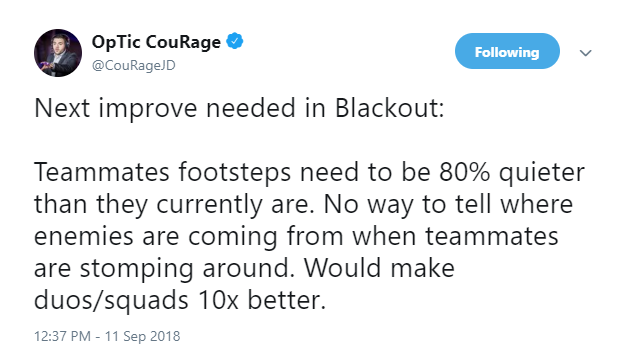 This was also an issue in the early goings of Epic Games’ popular Fortnite Battle Royale title, at which point the developers lowered friendly footsteps to a point where they could be clearly distinguished from enemy footsteps.

CouRage’s proposed ideas are the exact type of feedback that Treyarch have been encouraging players to give after trying out the Blackout beta, in order to keep the gaming experience fresh and fun when Black Ops 4 is released on October 12.