Did Nadeshot Drop Another Hint that Karma is Set to Join 100 Thieves? - Dexerto
Call of Duty

Did Nadeshot Drop Another Hint that Karma is Set to Join 100 Thieves?

An eagle-eyed Twitter user has found a possible hint from Matt ‘Nadeshot’ Haag suggesting that Damon ‘Karma’ Barlow could be on his way to 100 Thieves.

First spotted by Twitter user iByXeL, in a tweet posted following the announcement of 100 Thieves acquiring Kenny and Fero, Nadeshot declared his excitement for the upcoming CWL Las Vegas event, but perhaps also gave us a clue as his plans for the rest of the roster, writing;

Can’t wait for the first Call of Duty tournament in Las Vegas this December. Bout to be on another level! Ahhh, so happy to be involved with this community again. Missed this feeling so much. @100Thieves #100T

While there is nothing specifically linking Karma to 100 Thieves in the tweet, it’s a certain phrase that has gotten eyebrows raising.

The words Haag uses to describe the Las Vegas event are “on another level” , which interestingly, is the current location on Karma’s Twitter account, as set by the man himself. 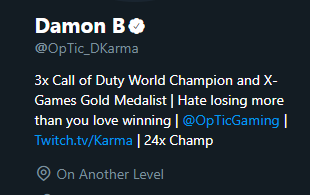 While there is no official confirmation that Barlow is joining 100 Thieves, he has been strongly linked with the organisation since he left OpTic Gaming’s Call of Duty line-up.

Nadeshot is definitely excited for 100 Thieves return to Call of Duty, even requesting users on the /r/CoDCompetitive subreddit to change their user flairs to 100 Thieves!

The Story of 100 Thieves Returning to Competitive CoD