Newzoo, an esports analytics firm, released viewership figures for various esports, but industry experts are disputing some of the numbers.

A tweet by esports journalist Rod ‘Slasher’ Breslau sparked a debate after he used the numbers aggregated by the analytics company to show what was the most watched esport in 2018.

One game stood out, as Call of Duty finishing 11th behind the likes of Hearthstone, Rainbow Six, and Heroes of the Storm.

According to Newzoo, here are the top esports games in so far in 2018 by 'esports hours watched' on Twitch & YouTube combined:

But how accurate is Newzoo when it comes to viewership? As a third party source, Newzoo serves as an aggregate that is separate from developer posted viewership numbers which theoretically removes biases from its stats.

“Traditionally esports journalists take viewership statistics directly from the developers/publishers/leagues at face value,” said Breslau over a Twitter DM. “This has generally been pretty accurate, especially for publicly traded companies like Activision Blizzard where fudging numbers comes with much higher risk.

“In the absence of some data, especially for games or events that are on a downswing, having third-party companies whose job it is to collect this data has been quite helpful,” he continued. “But having those same publishers/leagues say that the data presented is wildly inaccurate is not helping the case for using data, even from a pretty well-respected company like Newzoo.”

Newzoo is often cited by mainstream media, but the companies numbers vary significantly compared to other viewership trackers.

On Esports Charts, the viewership for just the Call of Duty World League Championship saw 5.3 million hours watched over the four-day tournament.

That number is over half what Newzoo claimed to be the total viewership for all Call of Duty esports events in 2018. 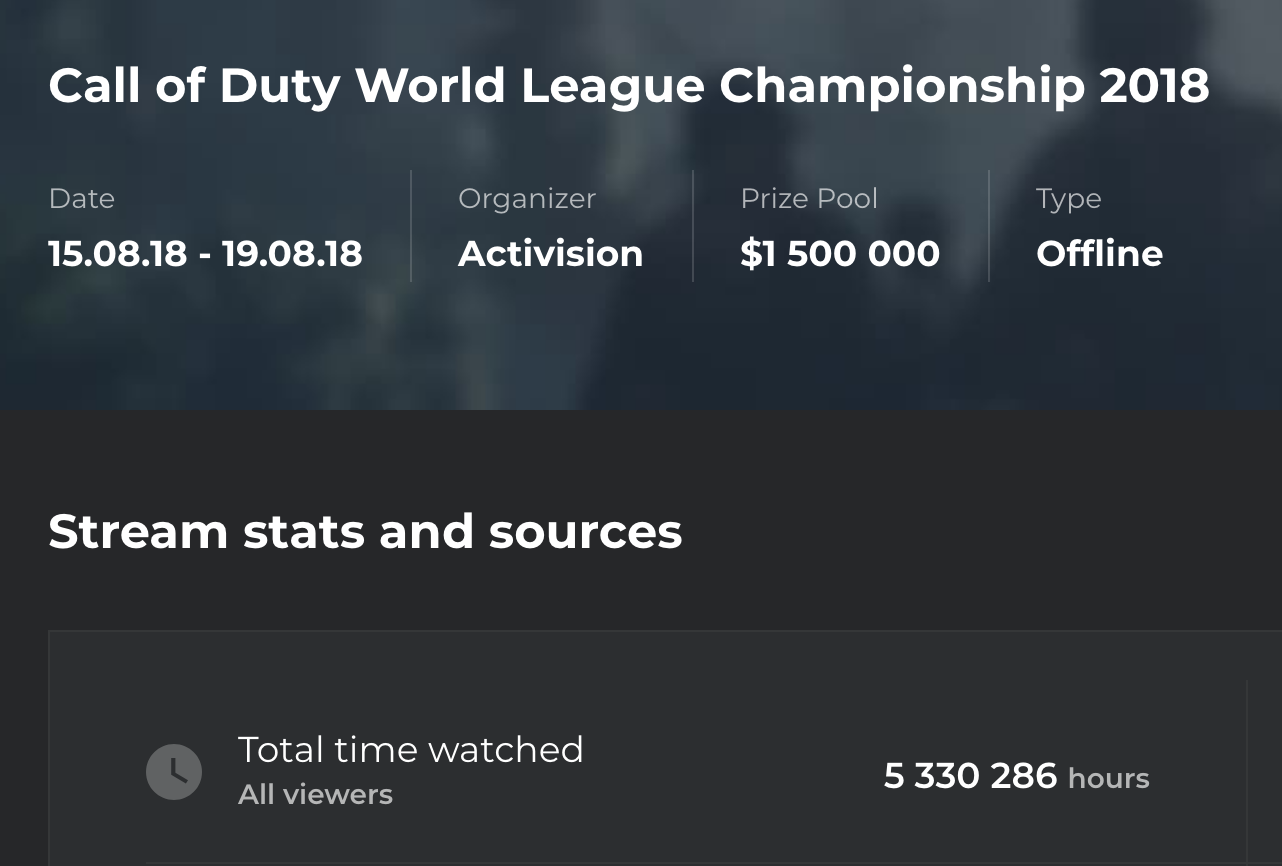 Breslau returned to Twitter to say that multiple people from MLG/AB and Ubisoft reached out to him saying the numbers were inaccurate.

Since posting, MLG/Activision folks have stated Newzoo's Call of Duty numbers are way off for Champs and CWL alone by millions, and Ubisoft say Rainbow 6 numbers don't match up either. If Newzoo unreliable, unsure if Nielsen/Superdata is any better. https://t.co/Lz0yIZ1rbD

Despite Newzoo’s reputation, responses from established members of the community – like Dreamhack’s CPO below – do not appear surprised that some of the firm’s numbers are inaccurate.

What? Newzoo with incorrect data?!

Because esports is still so young as an industry, there still isn’t a universally accepted way to track viewership, but that may be changing soon.

In traditional television, that universal service is the Nielson Ratings, who just recently acquired  SuperData to help the company track esports viewership.

“Nielsen’s acquisition of SuperData will be significant in this space, and they have a lot to live up to given the circumstances,” Breslau wrote.