How the new Fast Collapse mode works in the Blackout beta

Treyarch have added a brand new playlist to the Blackout beta on day three, called ‘Fast Collapse, which significantly speeds up the pace of the battle royale matches.

With the beta testing, one of the main components Treyarch is investigating is the speed of matches, which is affected by a number of factors: popularity of drop zones, player count and the ‘collapse’ circle.

The ‘collapse’ is Blackout’s name for the safe zone (i.e. the area not covered by the blueish storm area which will deal damage if within its perimeter), and this mode significantly increases the rate at which the collapse area becomes smaller.

In the standard modes, the first collapse area gets smaller two minutes after initial insertion (or ‘infiltration’), and sequentially shorter times after that.

Fast Collapse, which is currently only available in the ‘quads’ mode significantly increases the speed that the circular area will reduce in size, with the storm moving in at a more frequent rate.

Treyarch hasn’t said whether it will be available for duos or solos yet, but depending on how players enjoy the new playlist in quads we could see other modes get the option also. 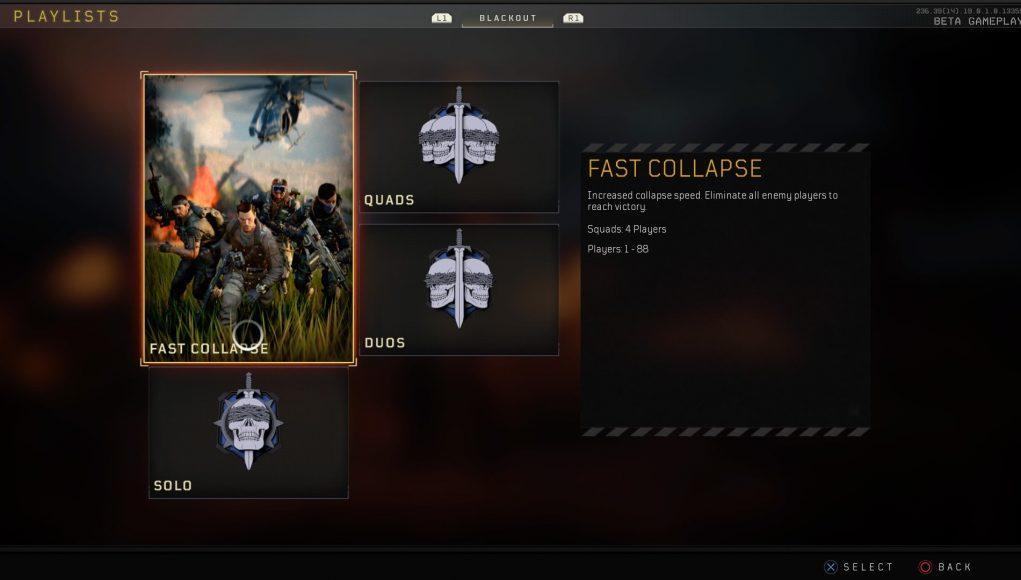 Treyarch are likely using the new mode as test, to see how players respond to a faster paced mode, and whether the standard playlists should be sped up by default.

The developers already increased the player count, from 80 to 88, on day two, but the difference with only eight extra players isn’t too noticeable.

Getting the pace of the action right will be crucial for the lasting success of Blackout, as it competes in an increasingly saturated genre.