North American esports organization Ghost Gaming have decided to move away from competitive Call of Duty, according to reports.

As a result, all four players on Ghost’s pro roster – Christopher ‘Parasite’ Duarte, Adam ‘GodRx’ Brown, Andres ‘Lacefield’ Lacefield, and Casey ‘Pandur’ Romano – have been and have become de facto free agents as of September 10.

All four players posted about the news on their personal Twitter pages, although Ghost Gaming have yet to make a formal announcement about these reports, but we will add it to this piece if and when they do.

F/A thank you Ghost for everything I wish them the best of luck with their future endeavors away from CoD. We are either looking for another org or are all separately free agents.

As of now I am no longer apart of @GhostGaming which means I am F/A (Non restricted) heading into the next season, thank you for everything Ghost has done for me. Looking at all options, coming back stronger than ever 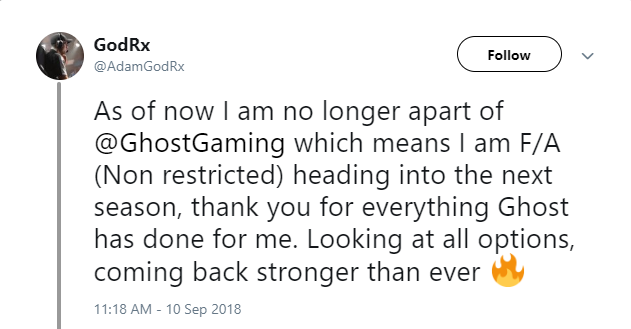 F/A moving into the black ops 4 season. Had a good run with the Ghost organization, felt like family but it’s time to move on. I’m more confident than ever 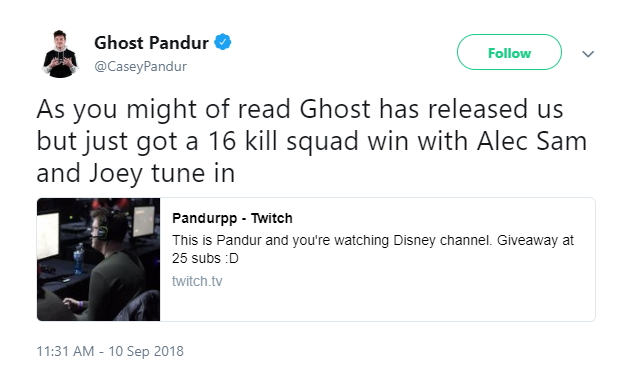 Parasite also confirmed that Ghost were pulling out of competitive CoD when he appeared on the live-stream OpTic Gaming content creator Damon ‘Karma’ Barlow, however he stopped short of revealing the reason for the org’s decision.

He also confirmed it in a tweet replying to news about Ghost’s roster changes.

Ghost Gaming’s spell in competitive Call of Duty was short but respectable. Since entering the scene midway through the Infinite Warfare CWL season, the org maintained a constant presence, competing at nearly every major tournament and qualifying for both the 2017 and 2018 CWL Championships, where they placed top-8 and top-12 respectively.

With the org now out of the picture, the fates of Parasite and co. is yet to be determined. It seems that the players are open to the idea of continuing to compete together under another org, but whether or not that will be the case remains to be seen.