Matthew ‘FormaL’ Piper, main AR for the Chicago Huntsmen, has lashed out at the Call of Duty League’s scheduling, ahead of its inaugural 2020 season for Modern Warfare.

The upcoming Call of Duty League Season is arguably the most anticipated of all time. It is the first time that CoD esports has adopted a franchise-based system, with a number of star-studded rosters ready to face off.

The schedule for the inaugural Modern Warfare season has been announced, seeing each franchise host two separate weekends of fixtures. It all kicks off in Minnesota on January 24, seeing the ROKKR as the first franchise to defend their home-town.

Despite the excitement, some pros have been quick to point out potential issues with the CDL’s initial scheduling. One of these pros is FormaL, whose reunion with Scump sees them form the backbone of an exciting Chicago Huntsmen roster. 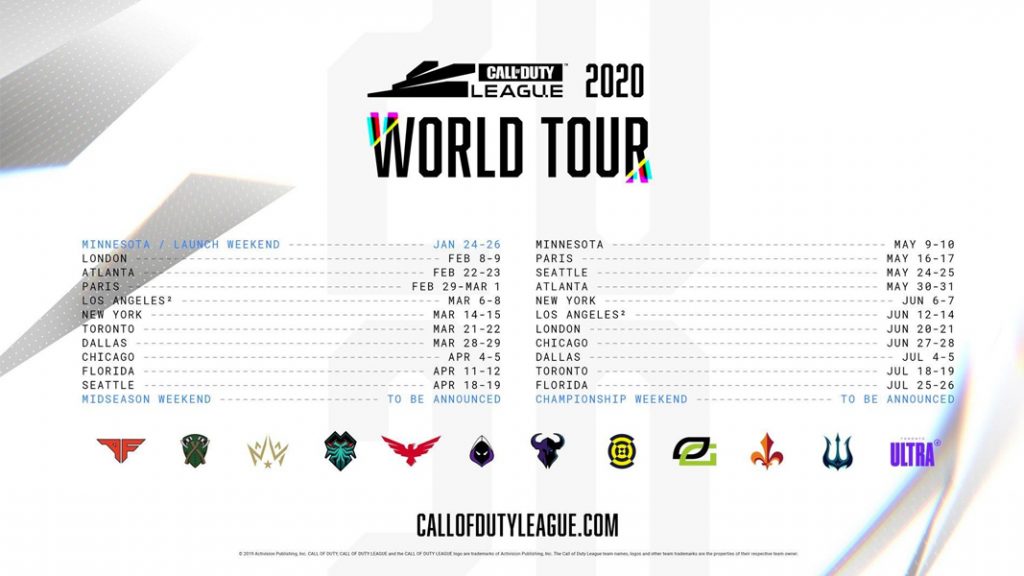 The full CDL schedule has been confirmed.

In a November 15 tweet, Piper said: “Lol international events for one series to be played for some of the teams.”

While the CWL has seen international events in the past, they have always been at least a few days long and seen a tournament take place.

However, the CDL will see certain teams fly outside of the USA – to London, Toronto or Paris – sometimes for just one ‘best of five’ series.

Trust me I’m truly grateful for the position I’m in, it’s awesome. But at the same time I’m a competitor, and I’d like to compete.

He then clarified his comments in reply to a fan, who suggested FormaL was complaining about being able to travel across the world to compete in Call of Duty.

“Trust me I’m truly grateful for the position I’m in, it’s awesome,” FormaL said. “But at the same time I’m a competitor, and I’d like to compete.” Other prominent members of the Call of Duty scene appeared to agree with Piper.

Chicago teammate Arcitys joked that he’d be getting “sick” when it comes to traveling across the world for one series, while OpTic Gaming’s GM, Muddawg, stated that his side “have to fly to Paris to play a singular regular season match vs Atlanta”.

In this case, the problem with the scheduling is clear. OpTic Gaming will have to fly from the west coast of the USA to France, all in order to play one series against Georgia-based Atlanta. FormaL and Muddawg clearly feel this is wasteful of both time and money to simply facilitate one series.

Many fans and players have suggested that the CDL would have been better off scheduling longer tournaments which would see franchises playing multiple series, rather than just one match.

One ‘best of five’ series in past CoD games has typically lasted up to an hour and a half at most, while a flight from Los Angeles to Paris is roughly 11 hours either way.

Franchises will, of course, stay for a few days, but many players seem worried about the impact the travel will have on their ability to compete.