Two-time Call of Duty world champion Patrick ‘ACHES’ Price, who has been competing for over a decade, wants to see one of the series’ classic multiplayer modes back in competitive rotation.

For the last few years, Call of Duty esports has featured three-to-four modes: Search and Destroy, Hardpoint and Capture the Flag/Uplink.

However, fans who were around during the Call of Duty: Ghosts season will remember that this wasn’t always the case, as Domination and Blitz were both played in competitive during the game’s run.

Blitz wasn’t loved by the community, but ACHES has revealed he would actually like to see Domination make a return in the CWL, saying that it’s “very simple-to-follow, unique strategies require players to be good at multiple things, clutch situations, hype situations”, and more.

But not everyone agrees. Esports veteran and former Call of Duty caster Chris Puckett – who is now working with the Overwatch League – thinks that Domination is not best suited to the spectator experience.

Puckett argues that having three simultaneous objectives – all active at one time – can be chaotic for viewers, while Hardpoint solves this problem by having one, rotating, objective. 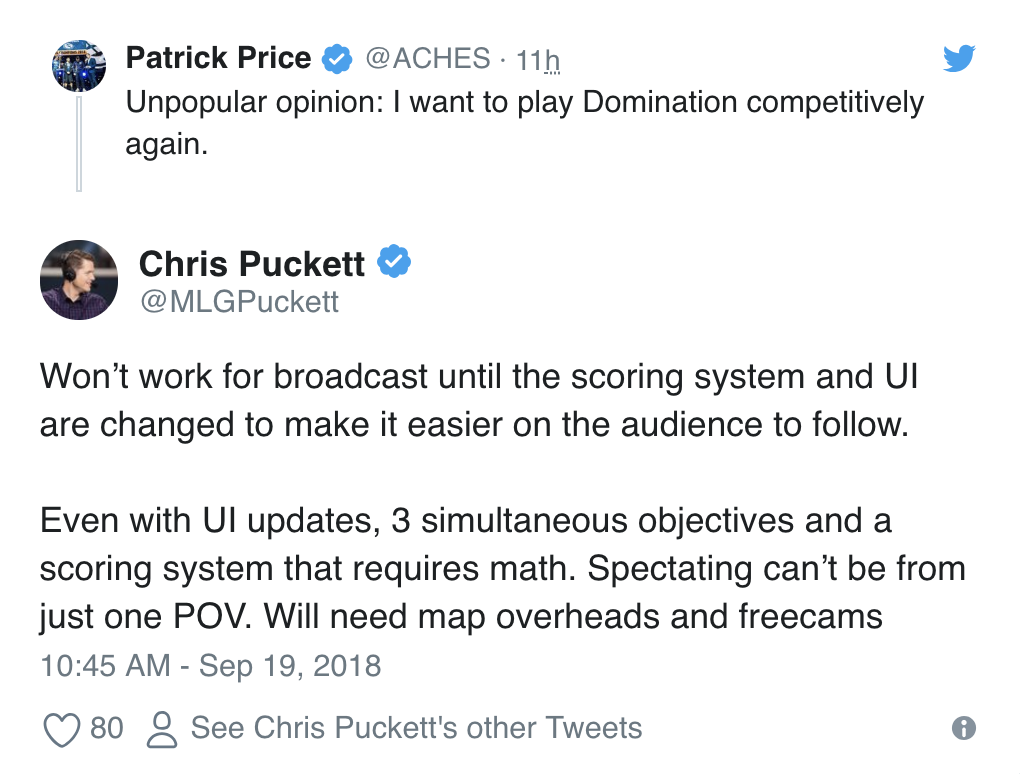 ACHES replied to Puckett, explaining that despite the ostensible chaos, fans will be most familiar with the mode, as it has been in every Call of Duty multiplayer, and so even casual fans of the series will know domination well.

Other pro players were not keen either, though. 2013 world champion Chris ‘Parasite’ Duarte simply said: “That game mode sucks”.

ACHES was undeterred, however, suggesting that a whole new system could be used, including six game modes, with vetos and seeding deciding what is played in a five map series.

The reveal livestream for the upcoming CWL season will take place on September 19, with fans and players alike eagerly awaiting the announcement about whether CoD esports will shift to 5v5 from 4v4.

With that decision attracting most of the attention, there has been less conversation about potential game mode changes, but it is expected that Hardpoint and SnD will remain, with a third game mode being either Capture the Flag or Uplink.