Solidifying themselves as the best competitive roster in Black Ops 4, eUnited were the last team standing when the dust settled at CoD Champs, the first time they’d ever cracked the top-three in three attempts.

They defeated the formidable 100 Thieves 3-2 in what was a very tight Grand Final, thanks to the advantage of having won the Winners Bracket, which meant one series victory was enough to clinch the championship.

With both teams considered tournament favorites coming into the week, it wasn’t much of a surprise that their lone meeting turned into a back-and-forth affair that went all the way to a fifth map.

However, after learning what it took to be a championship-caliber team following their win at last month’s CWL Finals, eUnited stepped up when it mattered most, not only getting to take home the prestigious trophy, but also a cool $800,000.

For the full final placements and prize split for each of the 32 teams, make sure to visit our CWL Championship 2019 Final Placements hub. 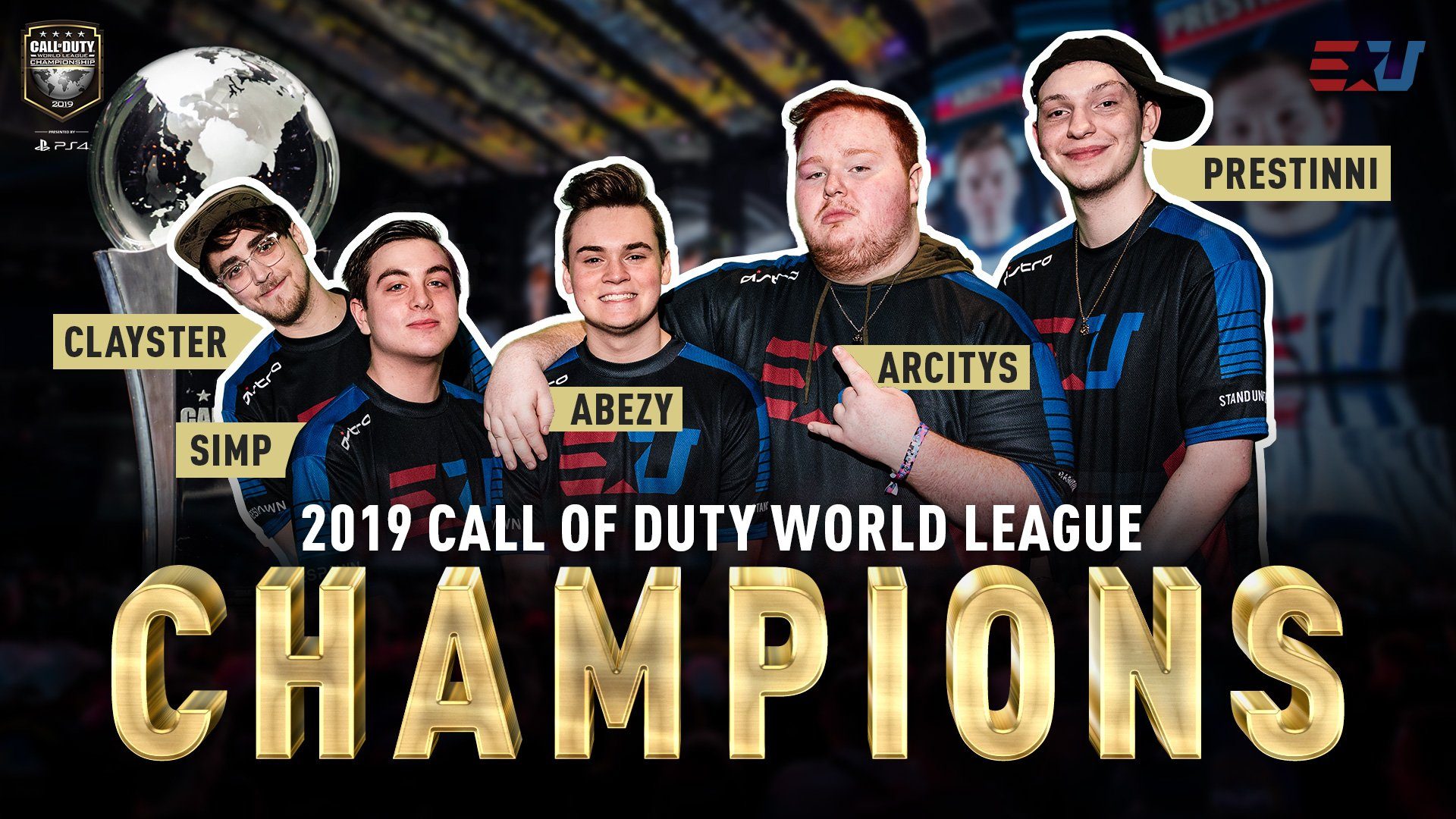 eUnited took the early lead in the serious with an impressive showing on the first map Hardpoint on Seaside, winning 250-126.

However, 100 Thieves are not a team that will roll over after a single map loss, and they proved it by coming out strong on Hacienda Search & Destroy, winning 6-3.

A key moment in that match came when 100T were trailing 1-2, and Priestahh was stuck in a seemingly unwinnable 1v3 situation. However, if there’s one thing to expect from the young star, it’s the impossible.

100 Thieves then took control of the series with a 3-1 win on Frequency Control, as a clutch kill from Enable stopped eUnited short from tying up the round count.

:surprised: @Enable gets the kill!@100Thieves close out the Control 3-1, one map win away from making this an even Grand Final vs @eUnited!https://t.co/NKHQSgV6Gh#CWLPS4 | #CWLChamps pic.twitter.com/u6C2PNJ9N1

With the threat of a bracket reset looming over them now, eUnited gave it all they had in the map four Arsenal Hardpoint, winning 250-219 to force a game five.

Staying on Arsenal, the two powerhouse sides clashed in a game five S&D with everything on the line for both teams. A pivotal moment came during the fourth round, when Simp and Priestahh were in a 1v1 situation, and eUnited’s young superstar ended up getting the win.

That was all of the momentum they needed, as it was pretty much smooth sailing for eU from that point, clutching up and taking the map 6-4 to win their first ever CWL Championship.

As if there was any doubt, Simp ended up being named the Most Valuable Player, and the stats he put up were bordering on insanity – a 1.35 K/D on Hardpoint, 1.76 K/D on S&D, and 1.20 K/D on Control, solidying himself as arguably the best player in the world right now. 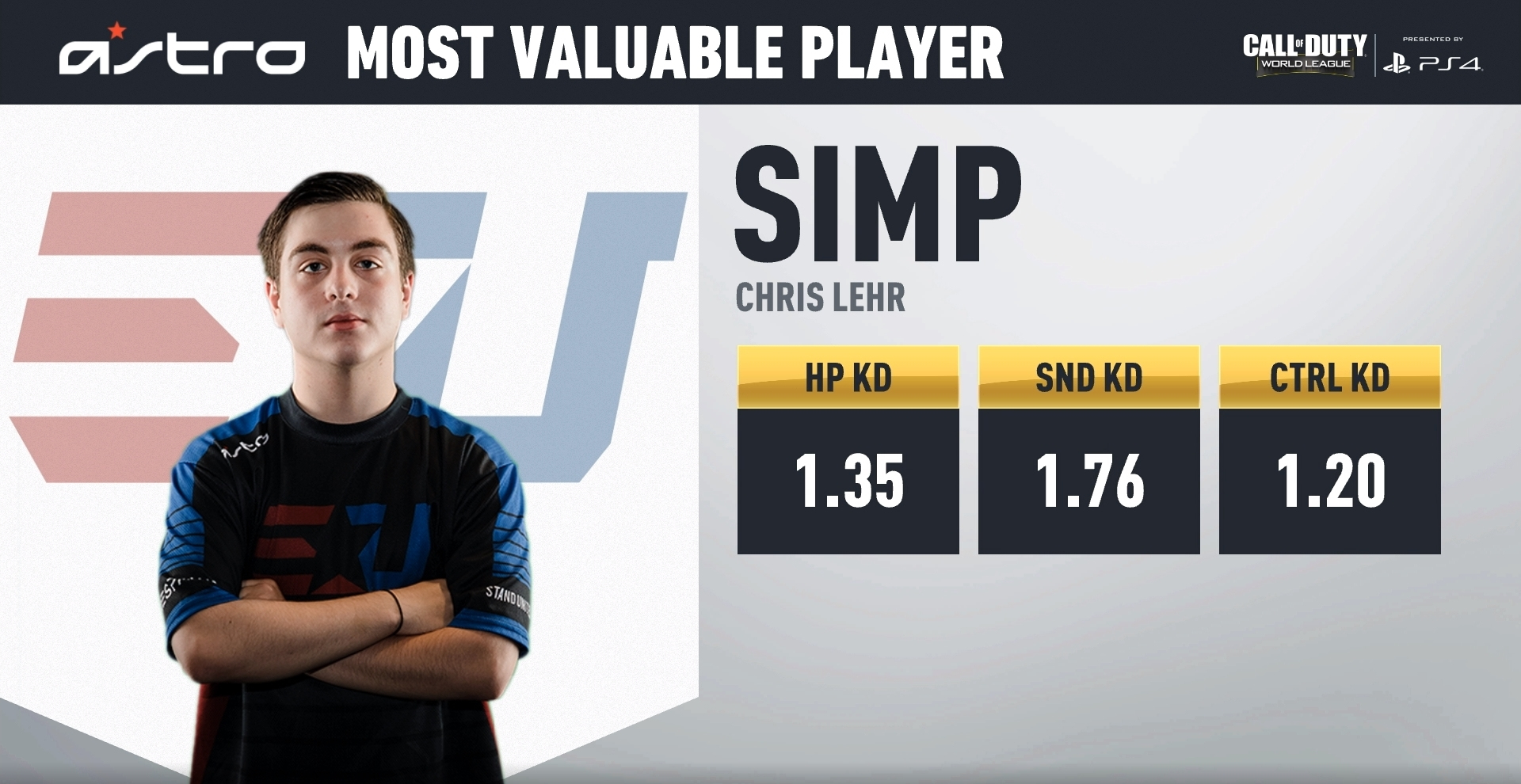 Simp’s stats at CoD Champs speak for themselves.

This major tournament victory is eUnited’s second in a row, after last month’s win at the Pro League Playoffs at CWL Finals. They join 100 Thieves as the only teams to have won multiple trophies this season.

As for championship rings, this is the first one for Simp, aBeZy, Arcitys and Prestinni, and the second world championship for Clayster, who also one on in 2015 with Denial Esports.