OpTic had a dysmal showing at the 2018 Call of Duty World Championship in August, eliminated in the group stages, despite only needing to win a single map against Evil Geniuses to advance.

Evil Geniuses, led by now Envy captain Patrick ‘ACHES’ Price, went on to secure World Championship and reinforce the ACHES vs OpTic rivalry – but it appears eUnited wants to start a rivalry of its own. 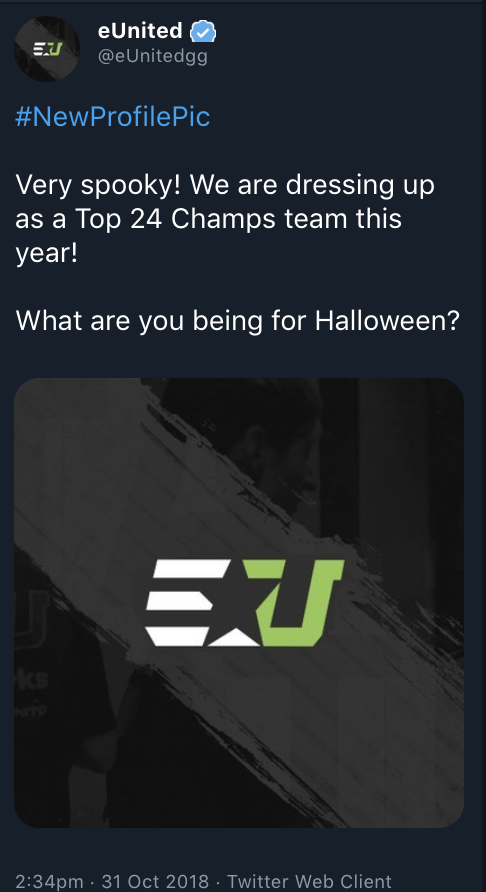 Although their original tweet was deleted, eUnited blamed it on a ghost, doubling down on their costume plans for Halloween.

We're still being a Top 24 Champs team for Halloween. pic.twitter.com/horwWA9KgA

And it wasn’t just this single tweet, they also changed their entire Twitter banner to the green colors of OpTic.

You guys didn't have to dress up then :sweat_smile: pic.twitter.com/WjtsDaua46

eUnited’s social media team may have earned somewhat of a reputation for their memes and gags, but this joke particularly caught the community by surprise.

100 Thieves graphic designer Alpaca – formerly of OpTic Gaming – responded similarly, with a picture of an open mouthed Drake in complete shock and awe.

There’s no response yet from OpTic Gaming themselves, but we’re sure they’re cooking something up to fire back at such slander – although a social media war with eUnited is not for the faint hearted.

Of course, a handful of fans of the GreenWall were not impressed by eUnited’s hilarity, but it’s the response they would have expected.