Easy ways to get longshots on Rust in Modern Warfare: lines of sight - Dexerto
Call of Duty

Easy ways to get longshots on Rust in Modern Warfare: lines of sight

There are surprisingly plenty of places to get longshots on the new Rust map in Call of Duty: Modern Warfare Season 2, and we’ve got a guide that shows all the necessary lines of sight.

One of the most iconic maps in Call of Duty history, Rust was remastered from its MW2 version and added in Modern Warfare as part of the recently-released Season 2 content drop.

A lot of players love the sandy, industrial map because of how small it is, meaning you’re almost always in the action and there are plenty of opportunities to rack up a high kill-count. The original Rust from MW2 is one of the most iconic maps in Call of Duty history.

One disadvantage, on paper anyway, is that it might be too small for certain weapon challenges, such as longshots, which players are required to get on every gun if they’re trying to unlock the gold, platinum and Damascus camos.

However, that’s actually a misconception. Turns out that there are numerous lines of sight on Rust that can produce longshot medals.

The visual guide below, courtesy of Reddit user ‘molyneuxluke,’ shows 10 different angles that you can shoot from to get longshots. Keep in mind that this applies to assault rifles online, meaning you might not be credited with a medal for other categories of weapons. 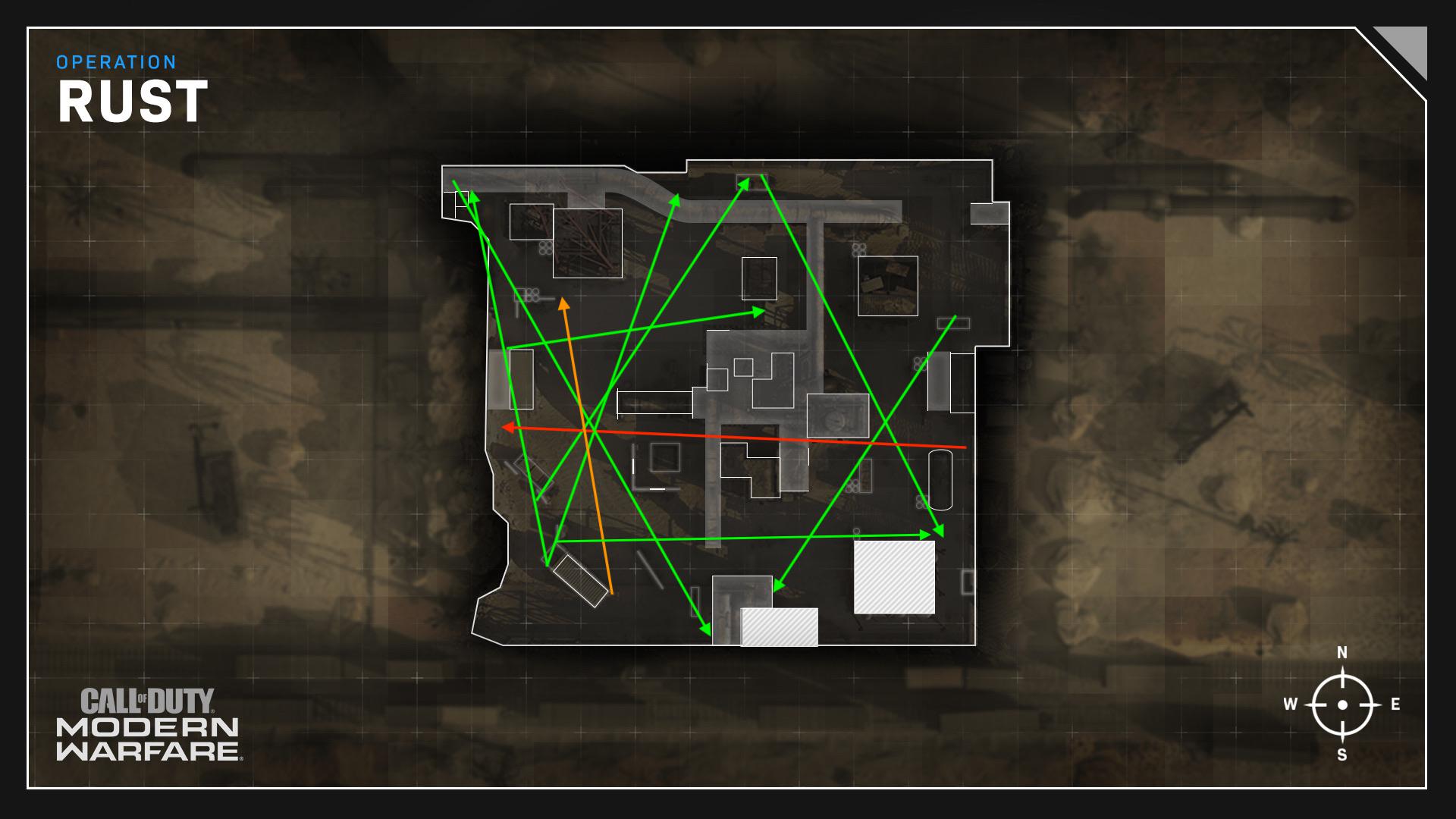 All of the lines of sight to help you get longshots on Rust in Modern Warfare.

The arrows on the image are color-coded based on difficulty: the green ones are the easiest to get, the yellow one is intermediate, and the red one is the hardest because you have to shoot through the low opening at the bottom of the large central structure.

Several of these lines of sight can also serve multiple purposes, depending on the game you’re playing. For example, in Domination, you can use a few of these not only to get your longshots but also defend/attack the three flags.

A few are also power positions, which is obviously a bonus because it means you can go for the medals while also having a stronger position on the map than your enemies.

Getting longshots on Rust with assault rifles isn’t as hard as you might think.

Considering how, next to Shipment, Rust is probably the most action-packed map in Modern Warfare, it’s one that you should definitely try to take full advantage of to level up your guns and unlock more camos.

While it may seem too small to get certain challenges completed, don’t be fooled and use this guide to get those long-range kills on your quest to Completionist and even Damascus.