Taylor Keating’s decision to part ways from OpTic Gaming Call of Duty star Ian ‘Crimsix‘ Porter hasn’t gone smoothly, and now the former manager has been forced to defend himself.

Keating first announced that he would no longer be representing Crimsix on July 11, stating that he “left on his own accord” in search of new opportunities.

Unfortunately, the announcement opened a can of worms on Reddit and social media, many claiming that he had actually been fired behind closed doors, despite saying that the decision was his alone.

As a result, Keating was forced to get back on social media a day later and defend himself, not only refuting the claims that were being made against him, but also citing them as a reason for why he was open to switching industries.

“Saw a lot of misinformation on Reddit about my departure from Crimsix,” he tweeted. “I mentioned it to him after [CWL] Anaheim. I didn’t get fired. I moved on. The things I see on Twitter and Reddit from the community of one of the reasons I’m leaving for other opportunities in other industries.” 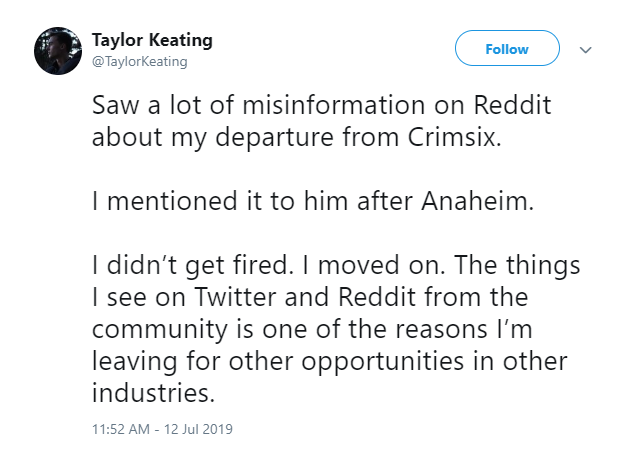 As far as facts go, there are no indications that he was fired by Crimsix, who himself privately confirmed to Dexerto that his former manager had voluntarily chosen to resign from the position.

The two began working together back in November of 2018, although they’ve apparently known each other for a while and are longtime friends, according to Keating.

Excited to announce that I’ll be working with my longtime friend @OpTic_Crimsix. I’m going to help bring the best content to his stream, YouTube and beyond. 2019 ain’t ready :beers: pic.twitter.com/KNbrabbfcD

Defending himself was not the only thing Keating did in his social media mini-rant on July 12 – he also went on to reveal the alleged identity of the mysterious and infamous Call of Duty esports insider known as the CoDBurner.

According to his tweets, the person who’s been behind the mask of the notorious insider this whole time is a man named Edgar, who goes by ‘EdgarAllanPwn3d‘ on Twitter.

“Also to my understanding, the CoDBurner is EdgarAllanPwn3d,” he wrote. “Good luck CoD community. I’m always rooting for you.”

Following that post, Dexerto reached out to Keating for further details about his accusation, but he refused to give any further comment at this time. 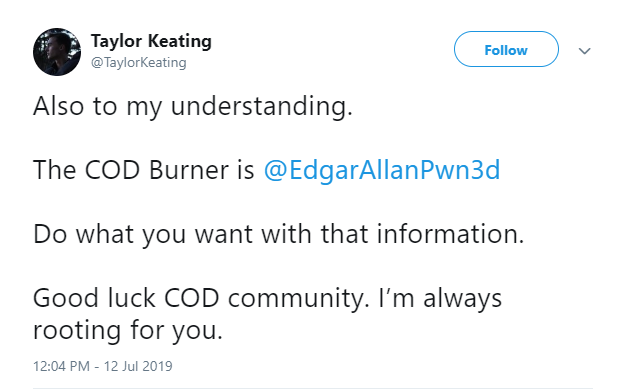 Of course, until there is any further evidence to corroborate Keating’s claims, there is no way to know for sure if that person is indeed the CoDBurner.

However, it was already suspected that the supposed insider was a “rich guy” who was considering starting his own team, which many in the tweet’s comments section claim fits the description of Edgar.

Funnily enough, if he does turn out to be the real CoDBurner, it would mean that he mentioned himself in the third person numerous times in his posts, referring to himself as the “rich guy.”

At least if the Burner stops posting leaked information on Reddit now, it will be a tell-tale sign that his secret identity was indeed uncovered.