The incident started when ZooMaa said, “ Not sure why Rated always has my name in his mouth, has he won an event?”

Since ZooMaa noted in the callout that Rated has not won an event, it is possible Rated has been talking about FaZe Clan’s failure to make the Pro League.

“Why you asking me to team then buddy? Get comfy to watch me [in the Pro League] over the next couple months,” replied Rated.

ZooMaa clarified that he sent out a message to all Pro League teams, including Rated’s Red Reserve, asking if he could fill in as a sub, before joining OpTic Gaming as a temporary fill in for Dashy.

The conversation continued and ended up resembling what most angry people yell at each other, including such classics as “say it to my face” and “or what.” 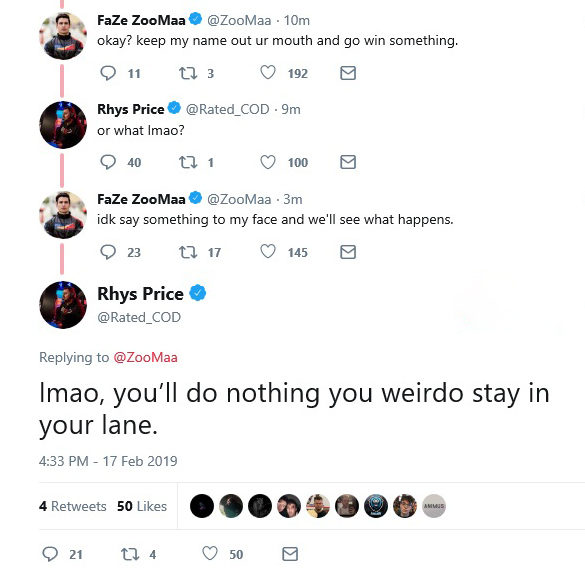 Members of the CoD pro community were excited to see the Twitter sparring and weighed in themselves.

James ‘Clayster’ Eubanks recalled a time when he got into a similar situation with Rated.

To be fair I tried to do something once upon a time and all you said was, and I quote, “stop shoutin at me mate”

Enable and Saints replied with reactions showing their anticipation for the Rated and ZooMaa argument.

Currently, ZooMaa and Rated are not scheduled to play against each other anytime soon; since OpTic and Red already played in the Pro League, the earliest they could meet again would be Week 7 of the Pro League in May.

However, ZooMaa may not be a member of OpTic once the next roster transfer window comes around, meaning the pair could meet up much sooner depending on where ZooMaa signs.