The Dallas Empire are champions of CDL Los Angeles, taking down Minnesota ROKKR 3-2 in the Grand Final to claim their first Home Series victory of the 2020 Call of Duty League season.

It seems like all of the negative talk surrounding Dallas Empire’s slow start to the season is all very much in the rear-view mirror, as they’ve now proven that they’re a bonafide top team with a Home Series championship under their belt.

The victory earned them the maximum 50 CDL points, which propels them to the top half of the standings. Coming in second were the ROKKR, who earned 30 points, and the top-four was rounded off by Atlanta FaZe and OpTic Gaming LA, both earning 20 points.

Group A, the lesser of the two pools in terms of how successful the teams have been so far this season, was actually a pretty entertaining affair.

Things started off with the Minnesota ROKKR taking down the struggling Seattle Surge 3-1, followed by OpTic Gaming winning their first-ever meeting with crosstown rivals LA Guerrillas 3-2.

The Guerrillas’ new-look roster showed some spark and promise, taking a 2-0 lead in the series, but OG’s experience and talent proved to be too much in the reverse sweep.

? @Blazt with a NASTY three-piece vs #OGLA @LAGuerrillas' new starters are already making an impact at #CDL2020 LA! pic.twitter.com/NNcMufyp0r

The Green Wall, fresh off its first win of the season, continued their newfound momentum with a 3-0 demolishing of the ROKKR in the next round, sealing a trip to the playoff bracket.

In the lower bracket, Seattle finally found some form, demolishing Guerrillas 3-0, with Octane playing a huge role in that.

His 43-16 performance in the Hardpoint was monstrous, topped off by one of the plays of the tournament.

However, the Surge got a taste of their own medicine in the following match, falling 3-0 to the Minnesota ROKKR, who secured the fourth and final spot in the playoff portion of the event. 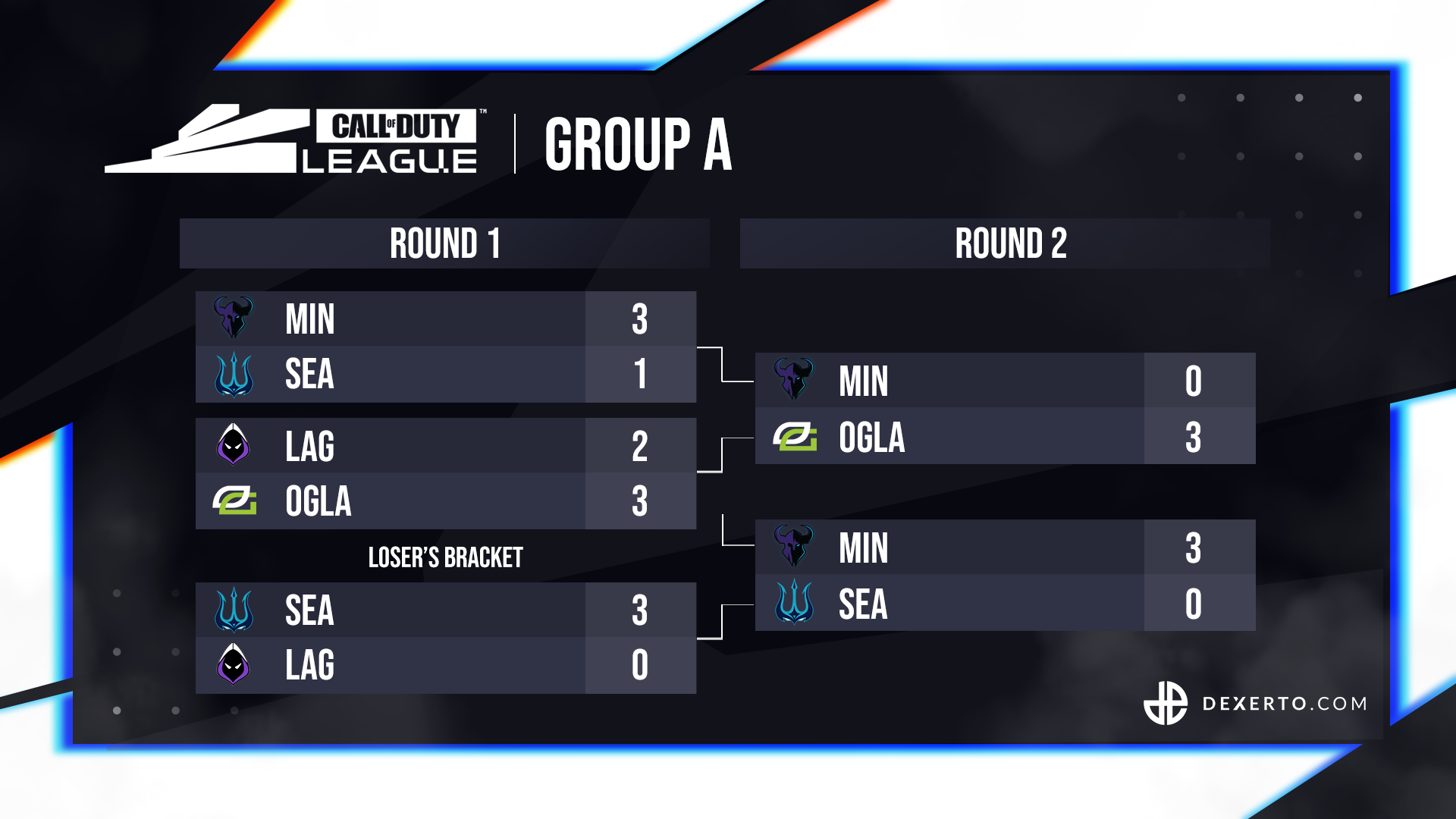 Coming into the tournament, Group B was easily the most-stacked half of the bracket, considering that three of the teams – Atlanta, Dallas, and Florida – all had made it to the grand final of at least one prior event.

Unsurprisingly, FaZe came out guns a blazing, dominating Mutineers 3-0 for the second match in a row (they also beat them 3-0 in the CDL Atlanta finals). The Empire also put on a strong showing, taking down the lowly New York Subliners 3-1, who were also featuring a new lineup after Zer0 had been benched.

Atlanta continued their dominant ways with a 3-0 win over Dallas in the next round, their second sweep of the Empire out of two meetings this season. The series featured a couple of top plays from superstars Simp and Priestahh, and another from the Empire’s Huke, who put on his own show during the first map.

? @Huke the Nuke popped off against @ATLFaZe at #CDL2020 Los Angeles! pic.twitter.com/Md4cbL33Ik

In the lower bracket, Florida sent New York home with a 3-1 win, which means that the Subliners will be tied for last in the league with only 10 points out of their first seven matches.

The final match of Group A saw the Empire stamp their ticket to the playoff stage with a 3-0 demolishing of Mutineers, who failed to get out of the group stage after making it all the way to the grand final of the previous event. 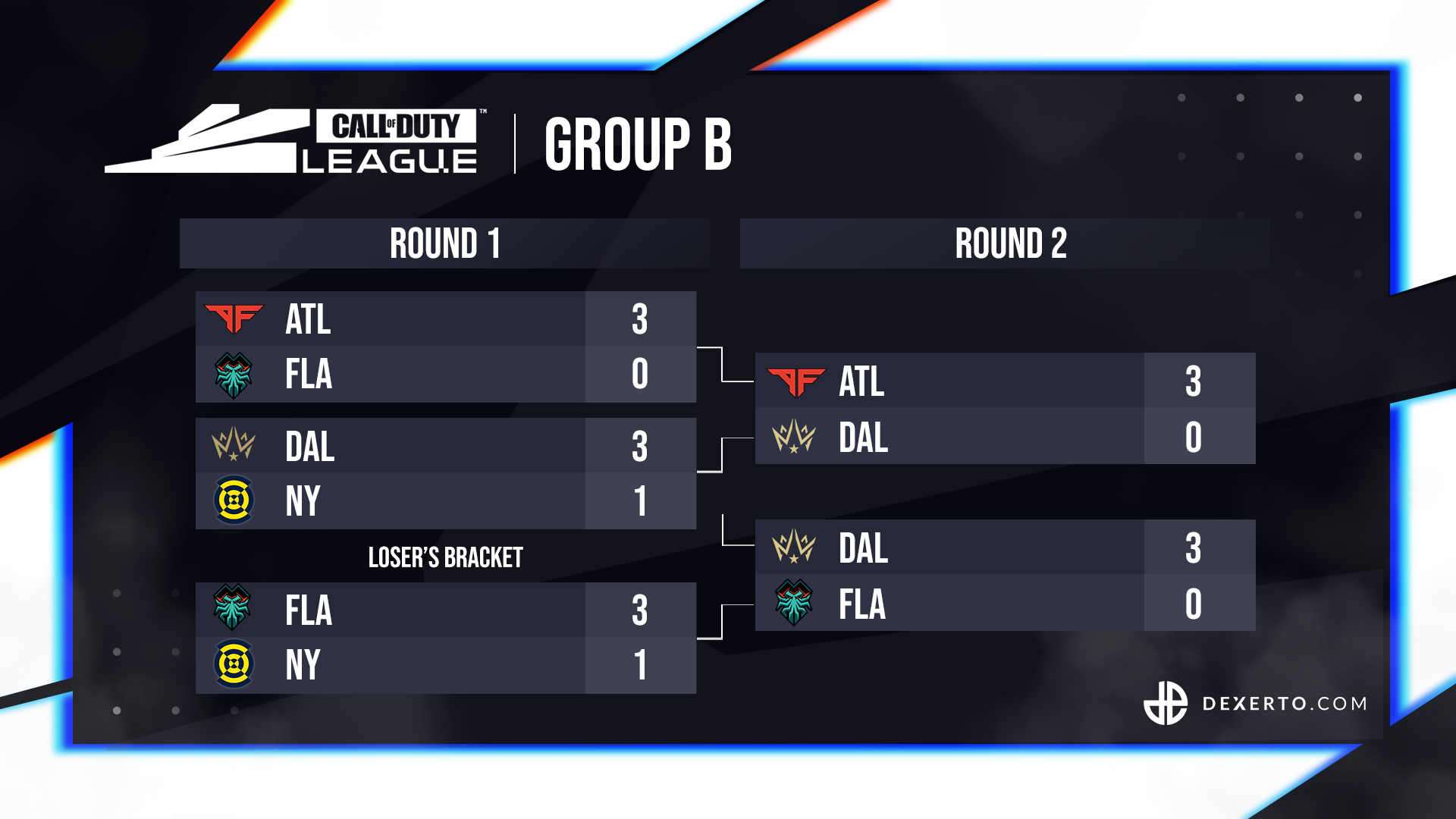 In response, Dallas clutched up on Gun Runner SnD, winning the map 6-2 to tie up the series. That clutch, however, paled in comparison to the ending of the Domination on Hackney Yard, which saw the Empire pull out a miraculous victory in the final moments.

What a clutch from @DallasEmpire to STEAL the Domination vs @OpTicGaming ?#CDL2020 Los Angeles pic.twitter.com/0yi2btIe6C

With momentum fully on their side, the boys in gold and black sealed the deal on Rammaza Hardpoint, which they won 250-204 to clinch a spot in the Grand Final.

The second semifinal featured Atlanta FaZe taking on Minnesota ROKKR, a rematch of their highly entertaining meeting at CDL Atlanta, which was also in the semis. Just as with that previous match, ROKKR won the first Hardpoint 250-221 to take a 1-0 lead in the series.

However, FaZe clutched up on Gun Runner SnD 6-4 to tie up the series at 1-1, unlike their first matchup, which saw Minnesota take a 2-0 lead before getting reverse swept.

The third map, Domination on Hackney Yard, ended up being a one-way affair in favor of ATL, who won 180-130. But it was the following Hardpoint on Rammaza that ended up being an instant classic, as ROKKR came up huge in the final seconds to steal the game 250-247.

With everything on the line in the do-or-die game five SnD on Picadilly, the boys from up north did what they couldn’t do at the last event – they sealed things with a 6-2 win and handed FaZe their first loss of the entire season.

Minnesota @ROKKR hand the juggernauts their first ever loss in the Call of Duty League, eliminating them from the LA Home Series! pic.twitter.com/CMRs3g3XfT

The entire weekend led up to one final battle between Dallas Empire and Minnesota ROKKR, neither of whom had won an event coming in, although the Empire did make it to the Grand Finals of CDL London.

They used that experience to take the first map, Hardpoint on Rammaza, 250-181, followed by a difficult 6-4 victory on St. Petrograd SnD. All signs pointed to a sweep, but ROKKR shut that down with a nice comeback on Gun Runner Domination, taking the map 158-149.

The match of the series was the game four Hardpoint on Hackney Yard, which Empire looked like they were going to win but an improbable and borderline impossible play proved to be the ultimate clutch for the ROKKR.

? WHAT JUST HAPPENED???@ROKKR with the UNBELIEVABLE clutch to win Gun Runner Hardpoint 250-247 and force a game 5 vs @DallasEmpire

For the first time this season, a Home Series Grand Final went to a game five, which was on Gun Runner for this event. Knowing that they were on the brink of being reverse swept, the Empire didn’t let things get too close, winning the map 6-2 and clinching the championship.

AN EMPIRE HAS RISEN!@DallasEmpire are your #CDL2020 Los Angeles Home Series Champions ?

Here are some highlight reels of the top plays and best moments of the CDL Los Angeles weekend.

Here are the best plays and top highlights from Day 1 of #CDL2020 Los Angeles!

Here are the top plays and highlights from Day 2 of #CDL2020 Los Angeles!

Catch up with all of the action via our CDL Los Angeles hub, which includes the VODs for both days’ streams, player interviews, and more.

For more information about the current season, including the full event schedule and current overall standings, make sure to check out our CDL Call of Duty League 2020 season hub.