CharlieINTEL spent $100 on reserve crates in Call of Duty: Black Ops 4 and the result was far from desirable.

Within the Black Market, there are reserves. These come in two formats: Reserve Cases and Reserve Crates. The Reserve Cases can be earned by accumulating points by playing either Multiplayer or Blackout. Conversely, Reserve Crates can only be purchased using real money.

The real value of $100 on Reserve Crates

So how much value can one get of spending $100 of hard-earned cash on Call of Duty cosmetics? As Charlie Intel found out, not as much as you’d hope.

Firstly, $100 on Reserve Crates will proportionally get you more crates to open than lesser amounts would. This is because the cost of COD points (the in-game currency used to but them) are discounted when spending $100 on them. Therefore, spending this amount should garner the best value.

Within a Reserve Crate is three items which means $100 worth of COD points will get you 195 items (65 crates). 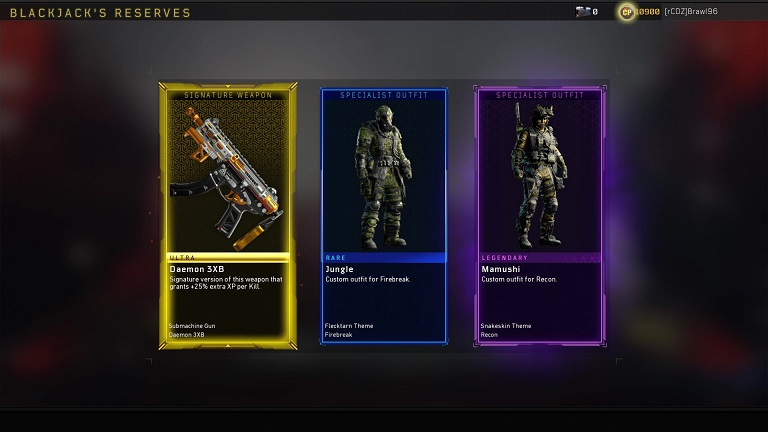 Perhaps the most disappointing element of spending real money on Black Ops 4 cosmetics was the frequency of duplicates. In this case, 62 of 195 items were duplicates.

However, every third duplicate allows a re-roll for an item of equal or better rarity. Consequently, only 41 of the 195 items were pure duplicates. Even so, this doesn’t make for good reading as 21% of the money ($21) was completely wasted.

Rarity of the items

Call of Duty players spend real money in an attempt to get ultra rare items. Items in the Black Market are divided into rarity categories: common, rare, legendary, epic and ultra. Players spending $100 would be forgiven for expecting more than a few ultra items.

Once again, the results don’t encourage others to go and spend their money. Just over 10% of items fell in the epic or ultra category. Interestingly 57% of items were considered rare, the category after common. Furthermore, of the 195 items only one of them was a signature weapon, although this was ultra-rare.

Meaning of the results

While the results put buying Call of Duty cosmetics in a bid light, the subjectively poor returns could just be down to chance.

Without purchasing a large number of Reserve Crates, i.e. more than 1,000, it is hard to draw an accurate conclusion. Otherwise, the results can simply be put down to variance.