Treyarch have finally added the illustrious Gold, Diamond and Dark Matter weapon camos to the Zombies portion of Call of Duty: Black Ops 4.

Treyarch is expanding its customizable feature to the entire Black Ops 4 ecosystem, as the company added the same feature January 31 to their Blackout battle royale mode, with Zombies fans now being able to unlock the prestigious camos.

In a new Game Settings Update, Treyarch has brought camo progressions for the highest tier of skins to Zombies for players to show off while mowing down hordes of the undead.

First things players might notice is that the camos don’t transfer over from Multiplayer. The company has been steady on their resolve that these skins “are designed to represent that players have completed a mode-specific challenge progression. ”

To get the Gold skins, players will need to have unlocked the previous camos for that specific gun. Then the challenge thickens for the Diamond camo that requires players to get the Gold on all of the guns in that weapon’s class. 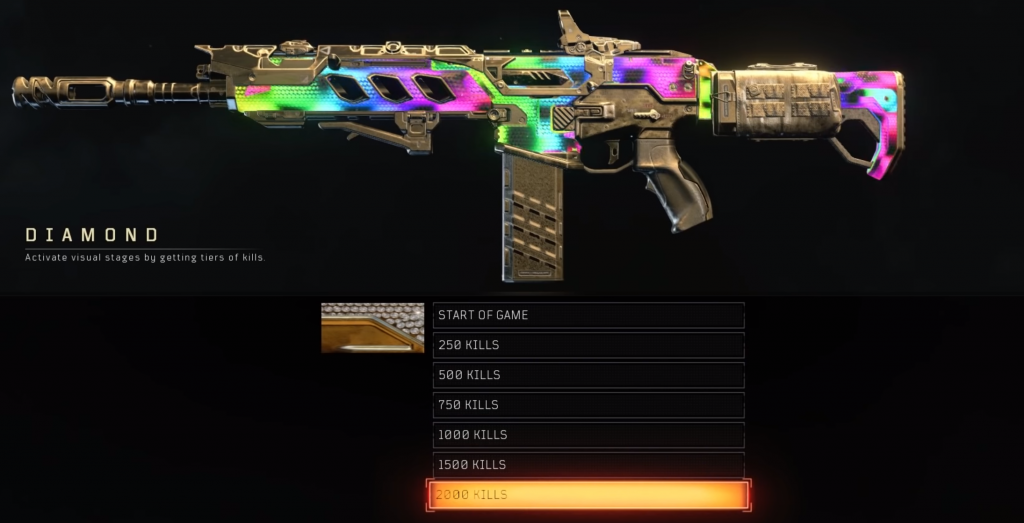 The last stage of the Diamond camo.

Players that acquire the skins will be in for another pleasant surprise as all of the Mastery Camos come with changing parts. The Gold skin becomes animated if Pack-a-Punch’d once, while acquiring an added electrical effect if completely Pack-a-Punch’d.

Players will find that unlocking the skins won’t be too hard, but it will definitely ask them to put some meaningful time into the Zombies mode.