Bevils posted a TwitLonger, discussing the fact that when a player enters a Search and Destroy game, all of the equipment that player has selected, like concussions or frag grenades and special issue equipment, are not available to use, but instead begin on a cooldown timer.

The coach believes this will lower the quality of gameplay in S&D, as he feels the lack of utility available to players in early rounds will discourage tactical strategies.

He also states that the rounds in-between players gaining their equipment will be “boring”, as players will likely stick together and attempt to out-trade their opponents when they have no equipment to work with.

Bevils thinks that allowing players to spawn in with their equipment ready to be used every round would allow teams to create strategies based around the use of utility and see players move away from grouping up to trade kills. 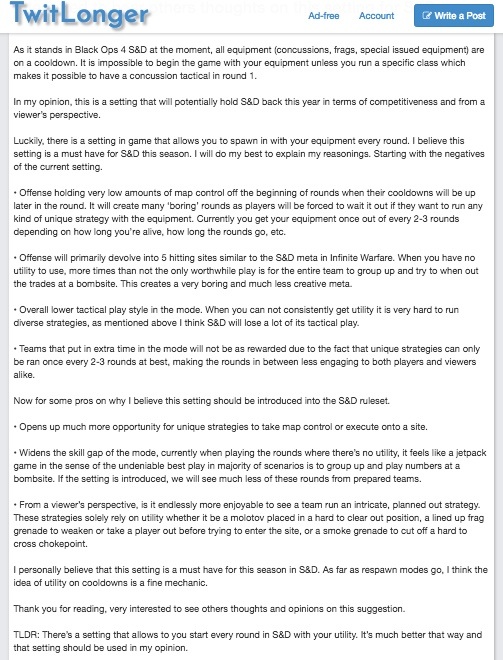 The former pro player also says that watching a team execute an “intricate, well thought out strategy” is “endlessly more enjoyable” and that he would like to see teams use items like smoke grenades or molotovs to block lanes; bringing a new level of calculated thinking to the game.

Bevils hopes this setting is introduced to the Call of Duty esports rule set when it is officially released, but Treyarch are yet to announce when that will be.

100 Thieves star Austin ‘SlasheR’ Liddicoat and Patryk ‘Rallied’ Salata, who is a well-known member of the Search and Destroy, community both agree that the mode could be improved in Black Ops 4.

SlasheR responded to say that he wants an old-school tactical feel from games like Ghosts and Modern Warfare 3 to return, while Rallied thinks Tac Mask and Flak Jacket need to be buffed before Bevils’ suggestion can be implemented.

yeah nades are fine i think if they make flak like normal.