Best guns for each weapon class in Call of Duty: Modern Warfare - Dexerto
Call of Duty

Best guns for each weapon class in Call of Duty: Modern Warfare

Call of Duty: Modern Warfare is absolutely brimming with all kinds of deadly weaponry and you’ll need to kit yourself out with the very best guns if you wish to stand a chance in the game’s highly competitive multiplayer. However, choosing a good weapon loadout can be a little tricky, especially when you are presented with so much choice.

After all, building a decent loadout that you can rely on in the virtual battlegrounds is incredibly important – in fact, you’ll need to have your wits about you if you wish to get your hands on the game’s best killstreaks.

There is a gun for every kind of playstyle as well as numerous attachments that can either help bolster or hinder your overall DPS. However, with so many options available, it can be a rather tricky process to know which weapons to prioritize.

Fortunately, we’ve put together a list of the best weapons that you should be equipping and how you can use them to crush your foes in Modern Warfare. 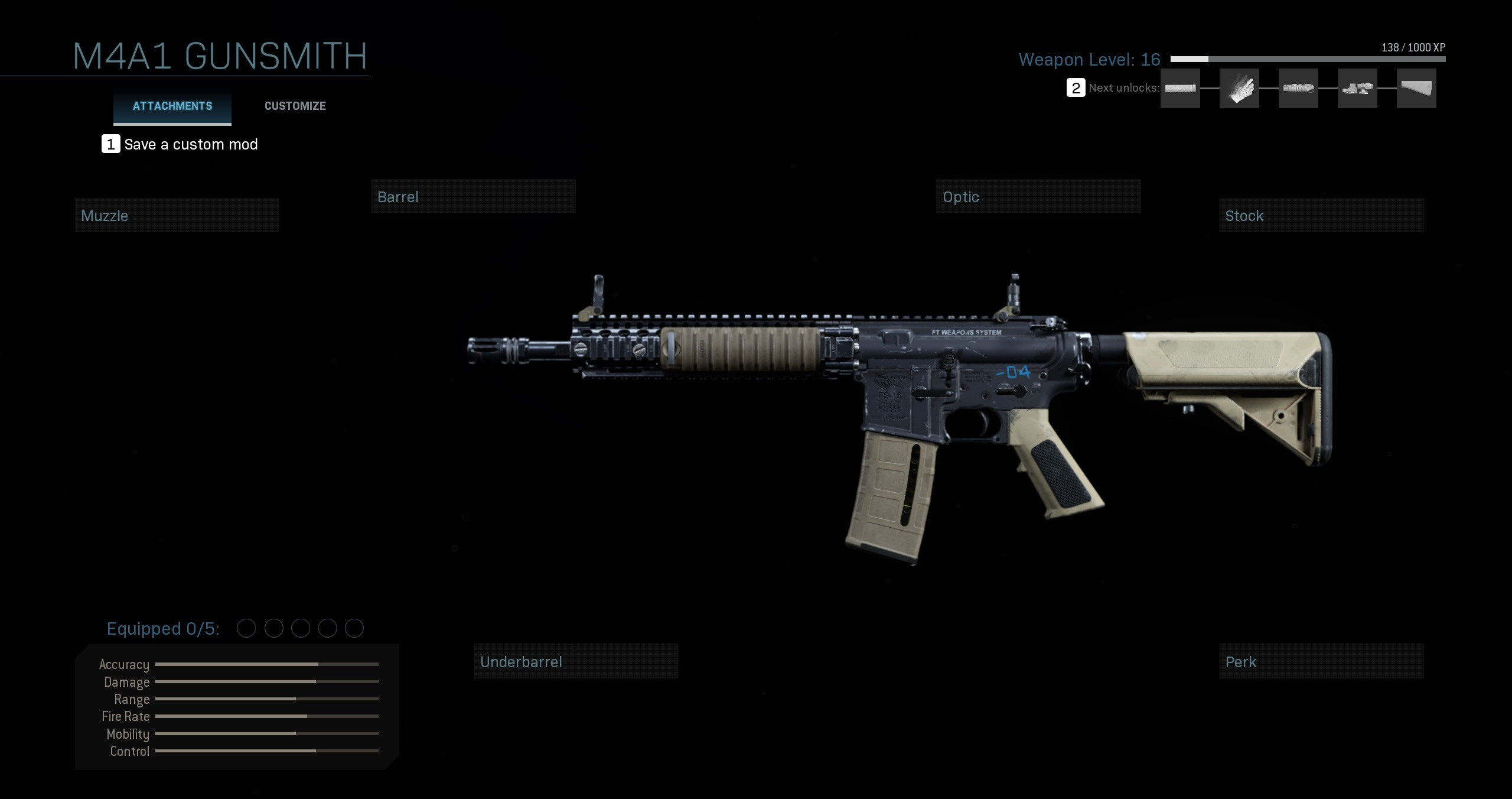 The M4A1 is currently the most devastating gun in the entire game thanks to its incredibly accurate firing pattern, low recoil, high damage, decent hipfire, and fantastic range.

Once you hit level six, you’ll want to prioritize using this ever-popular assault rifle over anything else. If you’ve been playing Modern Warfare since launch, then chances are you’ve seen this reliable rifle pop up in multiplayer matches more than any other gun in the game. In fact, the M4A1 even outclasses weapons unlocked at later ranks, making it the current king in most firefights.

Its 30-round magazine and high damage make cutting down multiple enemies a breeze, completely shredding through your foes within seconds. This assault rifle is especially lethal at range, especially when you pair it with the 4.0x Flip Hybrid Optic and Recon gun perk. Even the M4’s vertical recoil is incredibly easy to handle, so don’t be afraid to let the bullets fly when you see long-distance enemies.

We expect Infinity Ward to tone down the M4 soon, so be sure to abuse its power while you can. 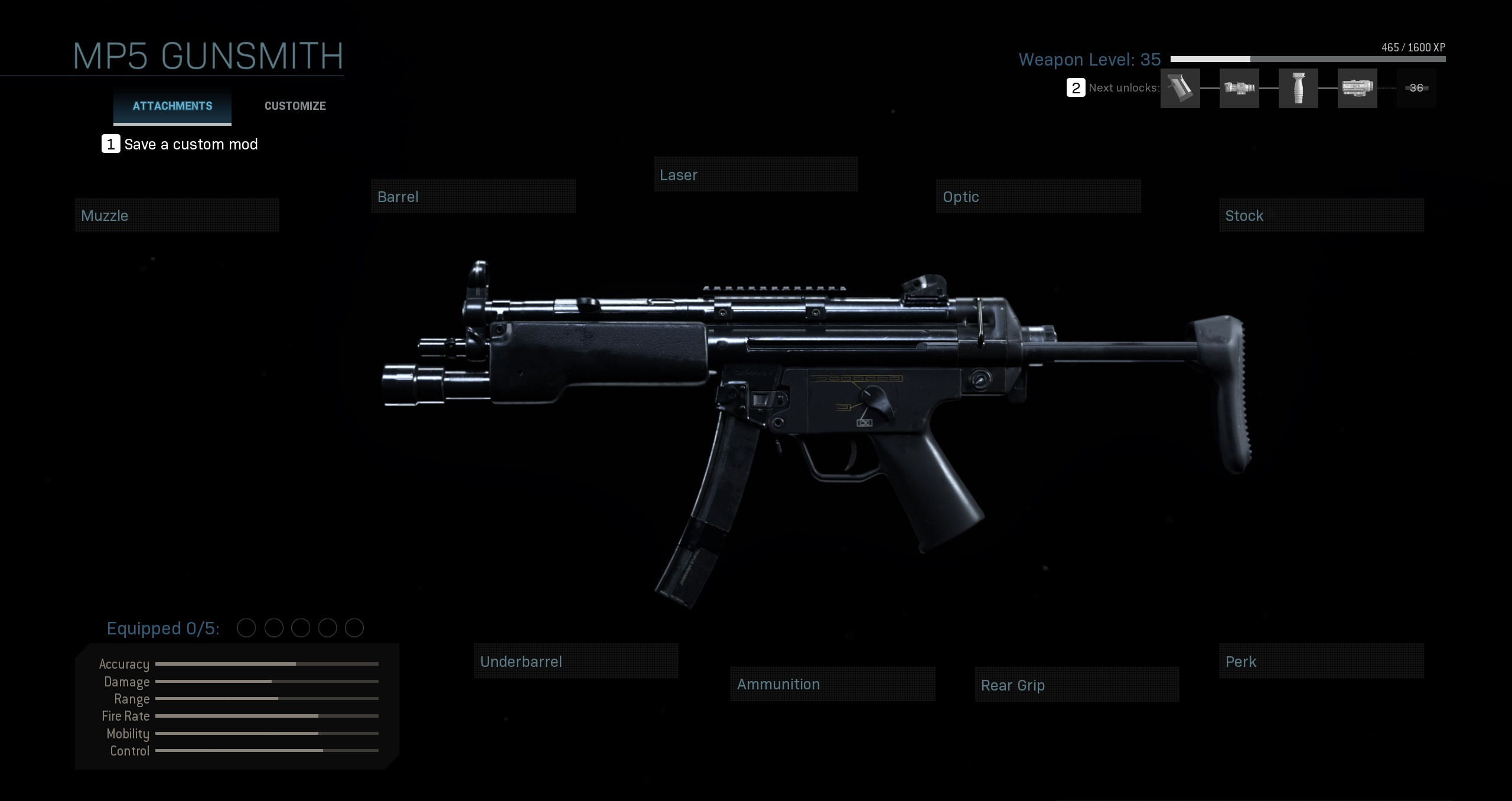 Those of you who played the Modern Warfare beta will know just how lethal the MP5 was and while it’s no longer as strong as it used to be, it’s still the next best choice after the M4A1.

While the MP5 may be classified as an SMG, we found that it performs more akin to an assault rifle thanks to its decent engagement range and accurate firing pattern. It may not deal as much damage as the M4, but its fast fire rate and mobility make it the perfect gun for those that wish to be more aggressive in their pursuit of victory.

To make matters even better, the MP5 has plenty of attachments that greatly decrease the weapon’s ADS speed, giving you a noteworthy advantage over those with slower sight speeds. Meanwhile, the hipfire is also nothing to be scoffed at either, especially when you attach the 5mW laser and Merc Foregrip. If you’re tired of methodically scanning every corner in search of enemies and simply wish to fulfill a more traditional run gun playstyle, then the MP5 will enable you to do just that. 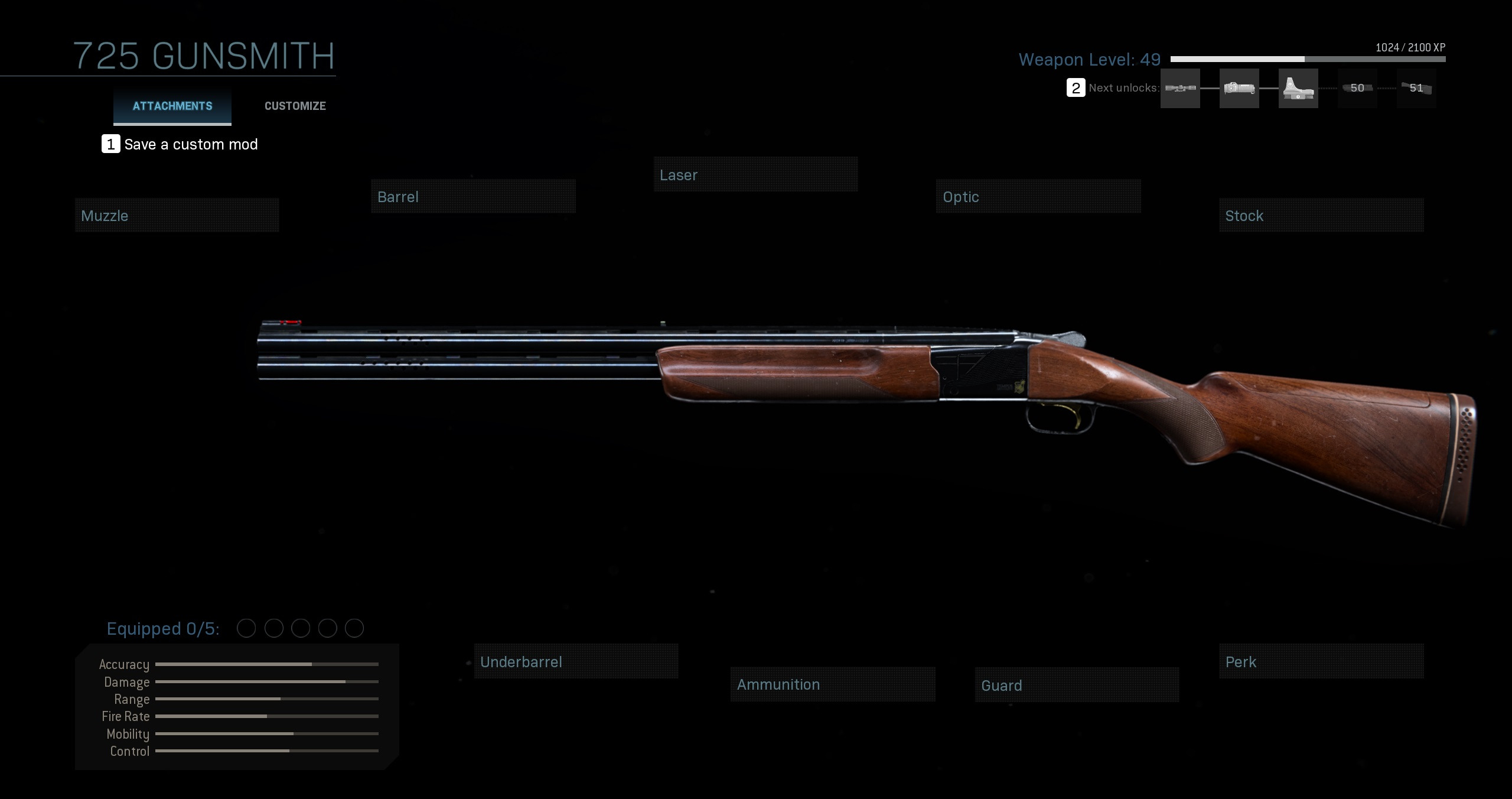 While the majority of games often boil down to medium distance firefights over defensive strongpoints, there are times when a shotgun can come in handy.

After all, there’s no better feeling than obliterating a pesky team of campers with a few lethal rounds to the face. It may seem counter-intuitive to be running around the map with a shotgun when death can come from anywhere, but if you’re willing to be a little smart with your movements, then you’ll be able to wrack up plenty of kills with the 725 in no time.

Try to aggressively flank around your foes by using the terrain to your advantage. Don’t go sprinting into areas with no cover – instead, use the various obstacles to force your opponents’ into close-quarters scenarios. While the 725 has decent one-shot potential, you’ll need to deliver both rounds at a distance if you want down any targets that aren’t close to you.

In order to get the most out of this break-action shotgun, consider equipping Double Time, Ghost, Tune-Up and Dead Silence to keep you mobile and your movements concealed. We found that maps like Azhir Cave, Hackney Yard, St. Petrograd, Rammaza, and Gun Runner offer plenty of close-range encounters, so be sure to take this powerful shotgun for a spin if you want to claim a dominant victory. 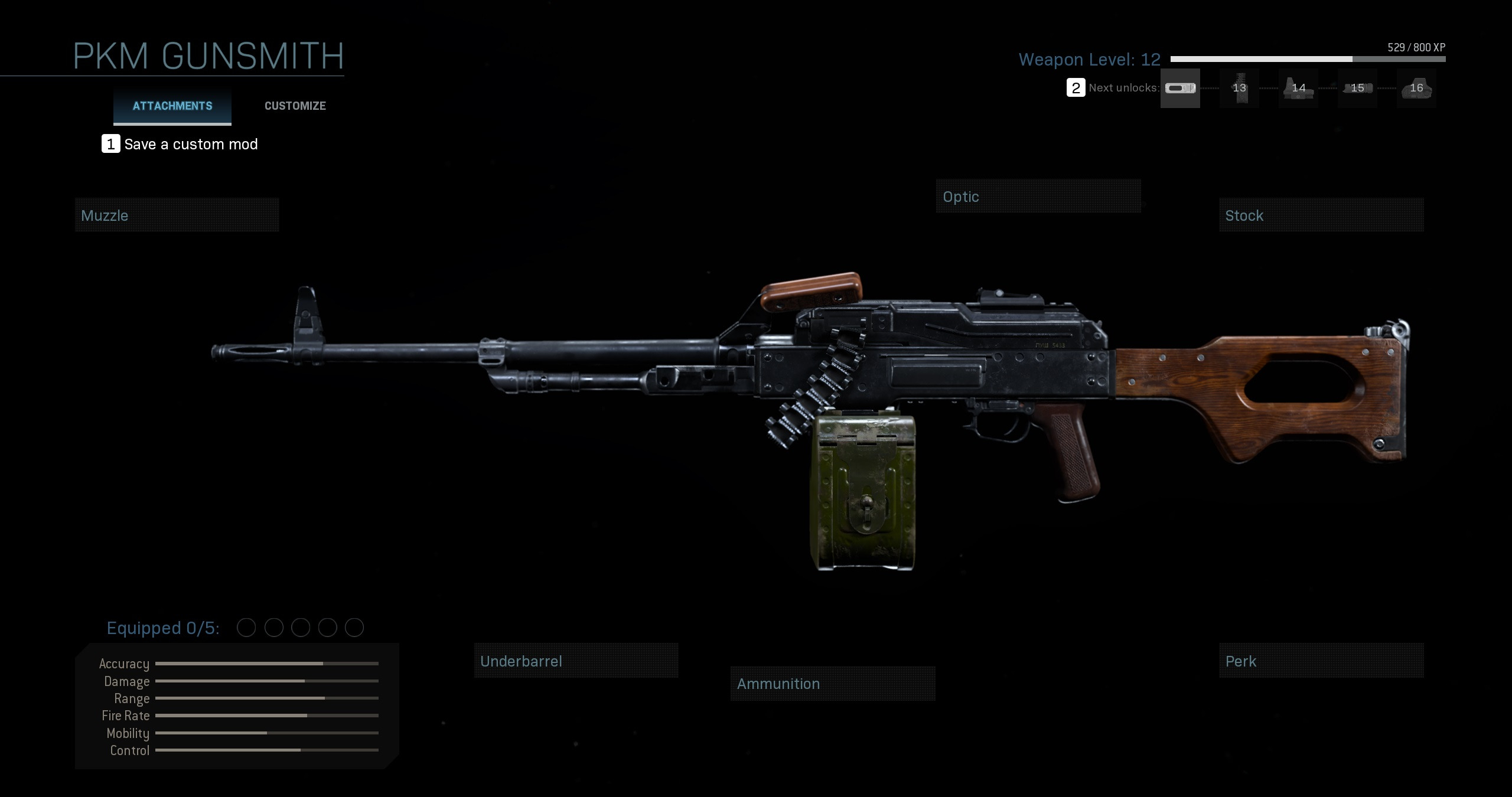 Light machine guns are incredibly strong in Modern Warfare, especially in objective-based game modes that require you to lock down an objective.

The PKM is an absolutely devastating LMG that can make mincemeat of multiple targets thanks to its fast fire rate, high damage, and massive 100-round magazine. The majority of Modern Warfare’s LMG’s suffer from low fire rates and lackluster control, but the PKM is a great jack of all trades gun that strikes the perfect balance between overall lethality and general usability.

While the PKM may be outclassed by the likes of the M4 and MP5 in close quarters situations, it does have fantastic kill potential when mounted. Try to find favorable lines of sight where you can hunker down and cut off major areas that see high volumes of player traffic. Even at long distances, the PKM can suppress enemy marksman by barraging their position with bullets, giving your teammates more than enough time to scramble onto the objective. 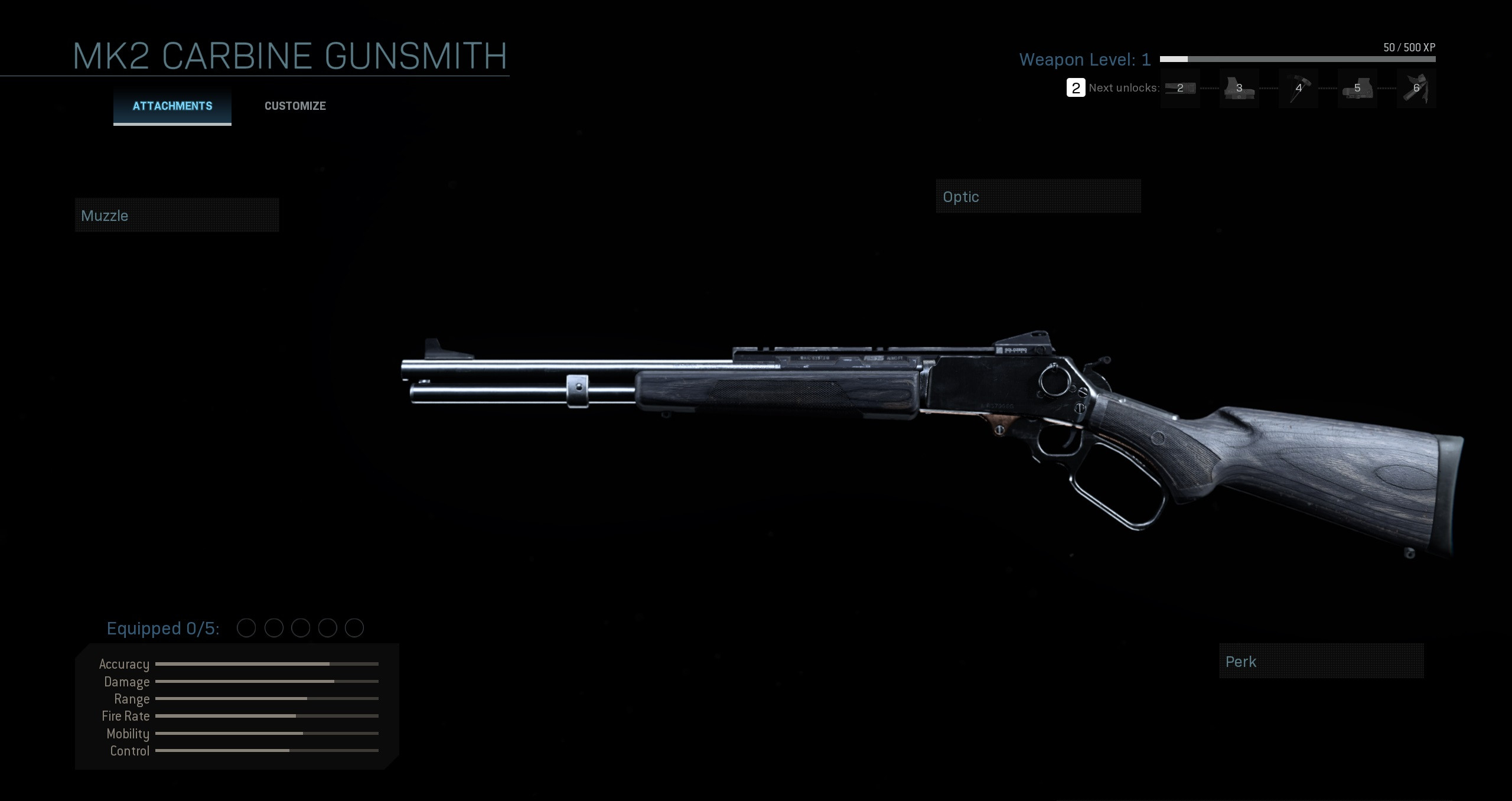 This highly accurate lever-action rifle can stop an enemy dead in their tracks with a single well-placed round to the head or chest. If you have decent aim and want to secure some satisfying single shot kills, then the trusty Carbine will enable you to do just that.

While the Carbine may not have as much range or control as the other marksman rifles, it does have a much higher rate of fire, making it easier to land consecutive shots before your enemies duck behind cover. If you find yourself struggling to land shots with the EBR-14 and Kar98K, then take the Carbine for a spin.

We found that the Carbine absolutely dominates foes on medium-sized maps and can instantly punish any peekers or head glitching enemies before they can even react. Make sure you equip the VLK 3.0 Optic, Compensator, Stippled Grip Tape, FFS MK2 Sport Comb, and Recon gun perk to increase your ADS speed and range. This setup also gives you a slight increase in mobility, so be sure to change up your lines of sight to keep your opponents’ constantly guessing. 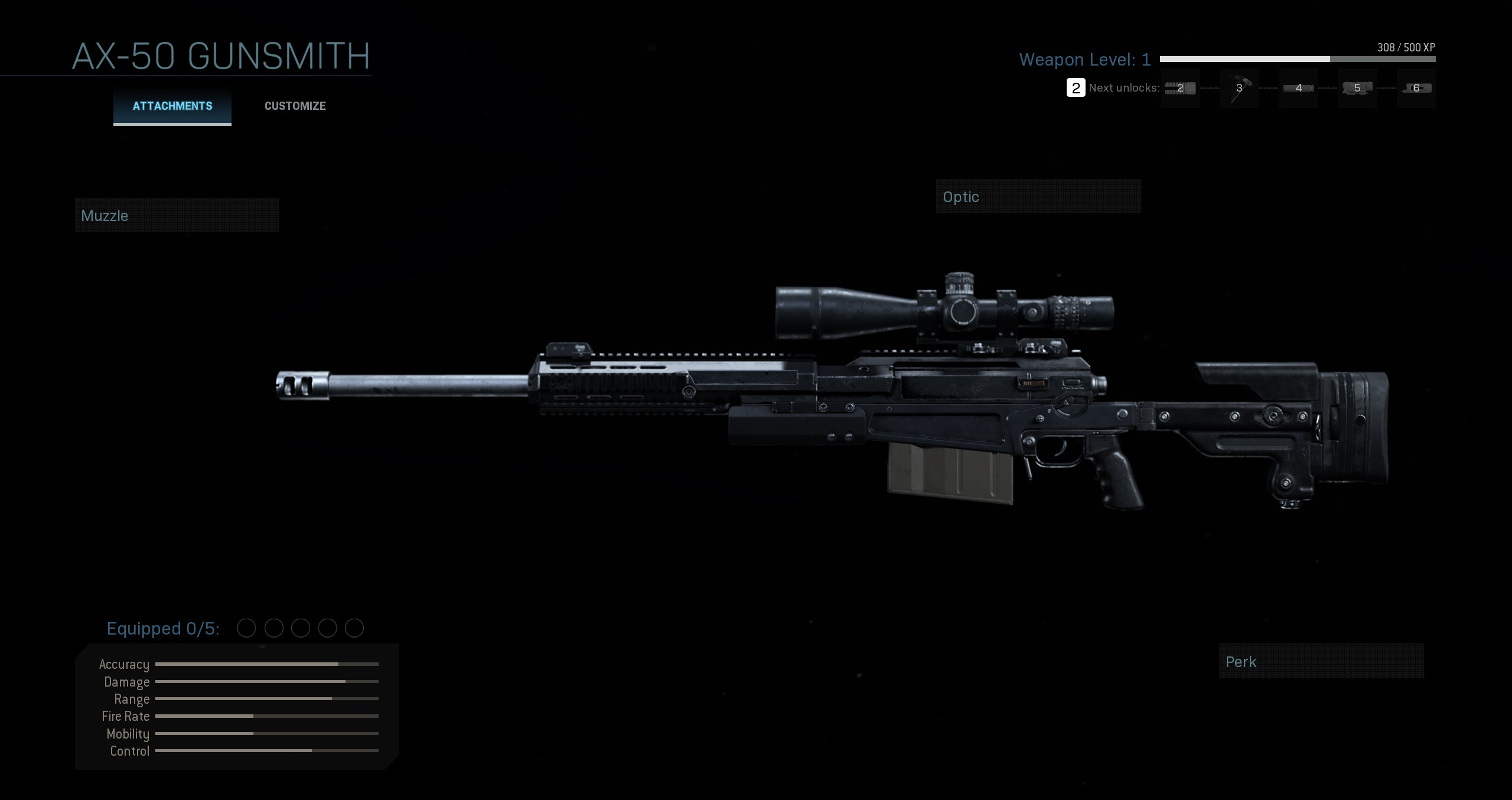 While the days of quick scoping and 360 no scoping may be in the past, the trusty sniper rifle’s reign is far from over – in fact, the 32v32 Ground War maps are perfect for chaining long killstreaks with sniper rifles.

If you want to start aiming for those montage-worthy headshots, then the AX-50 is the best sniper rifle for the job. This bolt action rifle offers blisteringly fast kills no matter if you aim for headshots or body shots, allowing you to take down long-distance enemies with ease. The only downfall with this gun is the rather lengthy ADS speed, but this can be countered by using either the Merc Thermal Optic or Cronen C480 Pro Optic.

In order to use this high-caliber rifle effectively, you’ll need to have decent aim as a missed shot can instantly give your foe the chance to counter, especially since the AX-50 lets out a beastly noise that can be heard by all nearby opponents. The AX-50 may seem like a rather unwieldy weapon when used in Modern Warfare’s regular game modes, but it’s an absolute monster in Ground War. 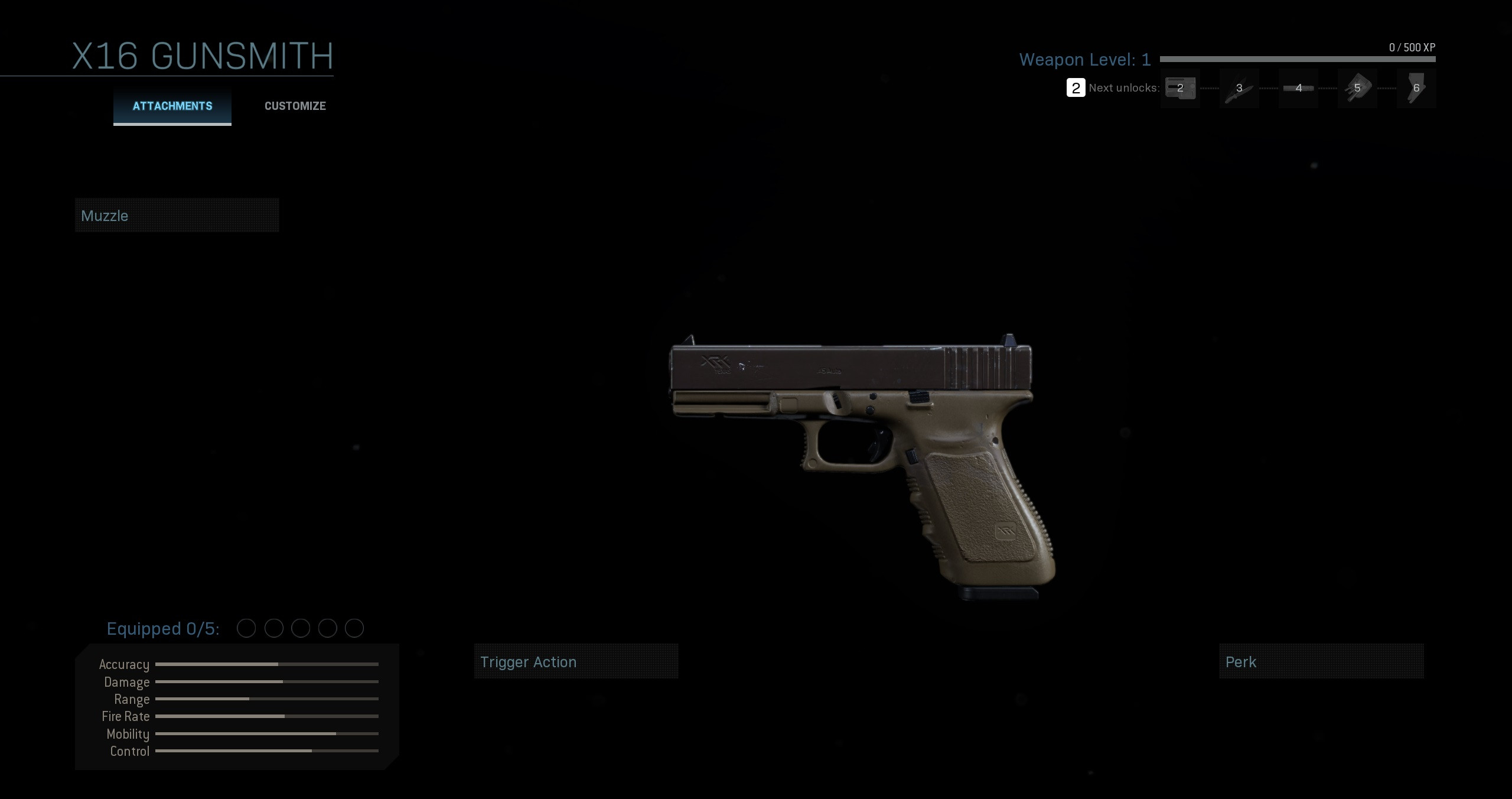 Having a trusty sidearm you can rely on when you’re caught a little short can be the difference between life and death. If you happen to run a loadout with a shotgun or sniper, then chances are you’ll need a decent handgun for those clutch moments when you need a little extra range or close quarters damage.

Fortunately, the standard X16 provides more than enough firepower to get the job done. While this modest handgun may not look or sound as flashy as .357 Magnum or .50 GS, it does beat them on fire rate, control, and mobility. It can be tempting to opt for pure damage when choosing your sidearm, but this won’t matter if you fail to land the shots needed to actually down a target.

The X16 takes the top spot due to its ease of use and decent all-round stats, giving it an edge over the more cumbersome handguns available. Clutch situations rarely happen in Modern Warfare due to the low kill times, however, you’ll be thankful for the added support when you find yourself in need of a few extra rounds. 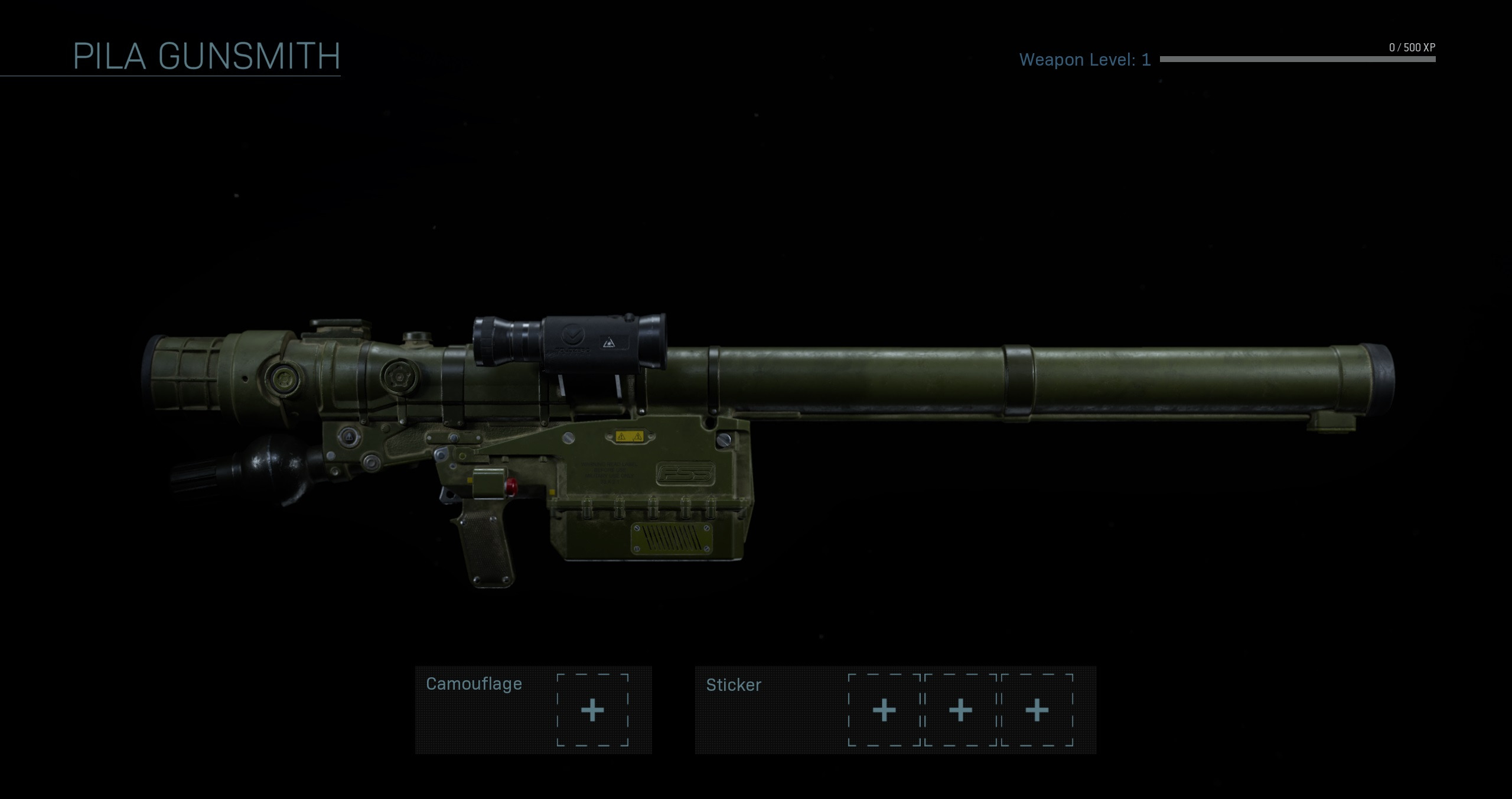 The sheer number of UAVs and aerial killstreaks present in Modern Warfare makes equipping a rocket launcher a good choice for any players looking to deny the enemy some easy kills.

The PILA may be the first launcher you have access to, but its self propelled missiles make downing any pesky recon planes quick and painless. There’s even a free fire option that’s great for clearing out rooms filled with enemy players.

Just make sure you find a safe spot devoid of enemy activity before you go to fire the launcher as the targeting system takes a few seconds to lock on, giving your foes more than enough time to stop your anti-aircraft plays. If you find yourself struggling to land any of the non-guided missiles and want a launcher that does all the work for you, then the PILA is the best option.

Check out the rest of Dexerto’s Modern Warfare guides to learn even more ways to dominate your competition.