Call of Duty professional player Patrick ‘ACHES‘ Price and CWL analyst Anthony ‘NAMELESS‘ Wheeler found themselves going at it after the May 27 matches at the CWL Pro League.

Division B teams resumed their Pro League action on May 27, with Team Envy facing Denial Esports in the first of two matches on the day.

Envy ended up suffering a tight 3-2 defeat at the hands of Denial – a match the featured a role change which saw ACHES using the Maddox and Maurice ‘Fero’ Henriquez going with the ICR.

NAMELESS noticed the change in strategy and called it out on Twitter, using some pointed language at ACHES in particular.

“Pat swindled the Maddox back?” he tweeted. “Give Fero a Maddox immediately. Pat gotta run a KN on that map.”

Inevitably, this tweet was seen by ACHES, who defended himself and his team’s role change by going straight at NAMELESS, calling his narrative “dogsh*t.”

“Bro, this dogsh*t narrative is so annoying,” he replied. “Actually brain dead. Y’all did the same thing with LG/Gunless last week. You just make something up and act as if it’s the truth. Fero wanted and asked to run a main ICR because he said he’d be more comfortable using it.”

NAMELESS, however, wasn’t having any of it: “Old Pat would have shut that down immediately bro.” 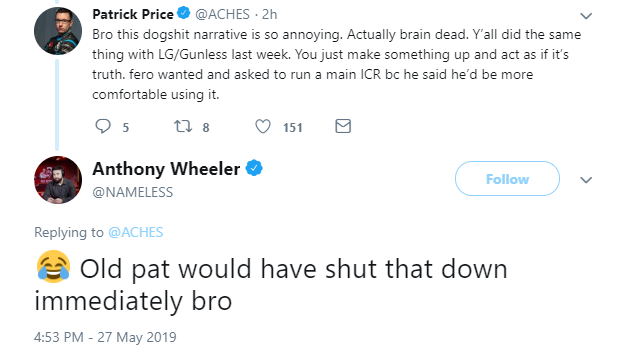 The argument grew to a long thread on Twitter, in which both sides stated their case on why the other’s argument was wrong.

In several of his tweets, ACHES mentioned Gunless and Luminosity, specifically noting how the analysts had pushed the rhetoric that Gunless had skipped out on team practices to go to EDC, which he claims that LG had been aware of well before-hand. 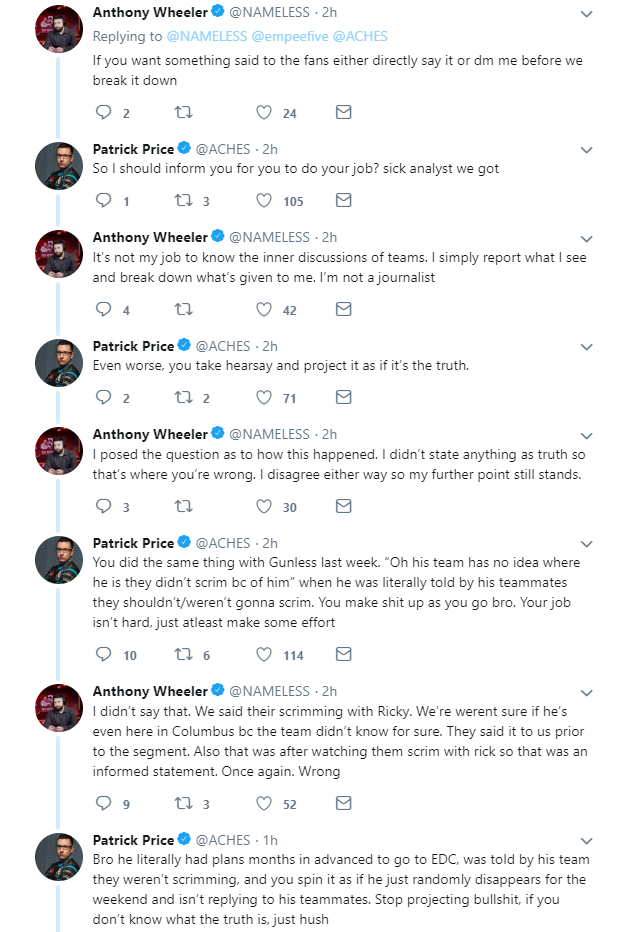 Ultimately, the two veterans decided to settle things down and agree to disagree, with NAMELESS saying that he would toss this spat to post-match loss stress, seeing as how the argument occurred almost right after Envy had lost.

Envy’s loss to the 3-8 Denial Esports was their sixth defeat in 12 games. Couple with Splyce’s dominant 3-0 victory against Enigma6 Group on the same day, the loss sent Envy a full game behind Splyce for the fourth and final automatic Playoff spot.

Envy’s loss to Denial on May 27 was a big blow to a team that has three difficult matches coming up.

It would have been a major boost had Envy beaten Denial, considering that their next three matches are against Heretics, 100 Thieves, and eUnited, all of whom are currently tied for the best record in Division B.

While they still have a very legitimate chance at making the Playoffs directly, Envy will certainly have to start improving their game quickly if they want to make it out of this week in decent shape.