While not heralded like the MP5 of MP7, the P90 is one of the strongest SMGs available in Call of Duty: Modern Warfare. To help you dominate games with this weapon, we’ve put together the best class setups and attachment combinations that cater to different play-styles.

Having been featured in several Call of Duty titles in the past, the P90 was brought back for the 2019 version of Modern Warfare as one of the premier SMG options in multiplayer.

It doesn’t receive the attention it deserves, primarily because it happens to be in the same category as the MP5 and MP7, but it’s very much a viable gun to use, especially in close-quarters.

However, it doesn’t have to be limited to close-range gunfights, as the game’s advanced Gunfight feature allows you to build variants of the weapon that are usable in different situations.

With that in mind, we’ve created our five best classes and loadouts for the P90, each built for one of the following five play-styles: run-and-gun, slower and long-range, stealthy but deadly, balanced, and Overkill. In a run-and-gun play-style, it’s important to have increased speed for elements like movement, aiming down sights and moving your weapon. The combination of attachments in this class achieve this without causing any of the other stats to decrease.

If you’re concerned about the 5 mW Laser giving away your position to enemies, feel free to change it to a regular laser – but if your plan is to play aggressively and move around a lot, then it shouldn’t be of much concern.

Double Time and Combat Knife (when you have it out) both let your sprint longer and faster, while Stim will allow you to heal quicker, so you can get right back into the action. Dead Silence is the Field Upgrade of choice for this, since it also provides the ‘lightweight’ speed boost, and Tune Up unlocks it faster for your after each use. 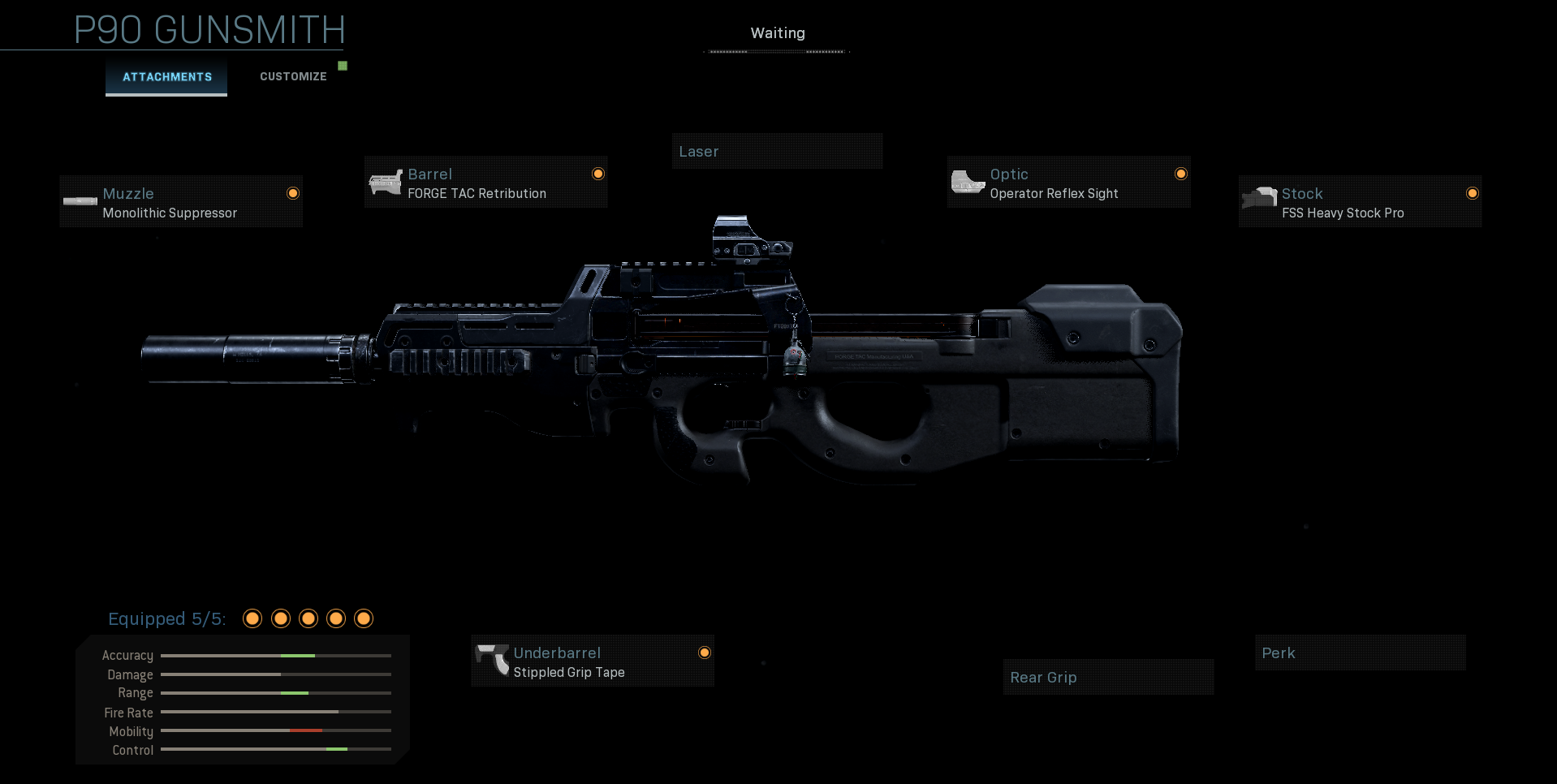 The best slower and long-range P90 class and attachments.

While the P90 may not be the ideal weapon to use for a slower and longer-range play-style in Modern Warfare, it’s still doable with this class. These attachments all work together to maximize the important stats, such as accuracy, range, and control, at the expense of mobility, which you shouldn’t really care about, anyway.

E.O.D. ensures that you don’t get ‘naded from your power positions, High Alert alerts you when enemies are aiming at you from blind spots, and Shrapnel spawns you in with an extra Claymore, which you can use to keep any access to your position guarded.

Munitions Box is the ideal Field Upgrade to keep your supply stocked, because it’s likely you’ll run out of ammo shooting people from long distances. If you notice enemies trying to converge on your position, your Smoke Grenade will be perfect for a quick getaway. 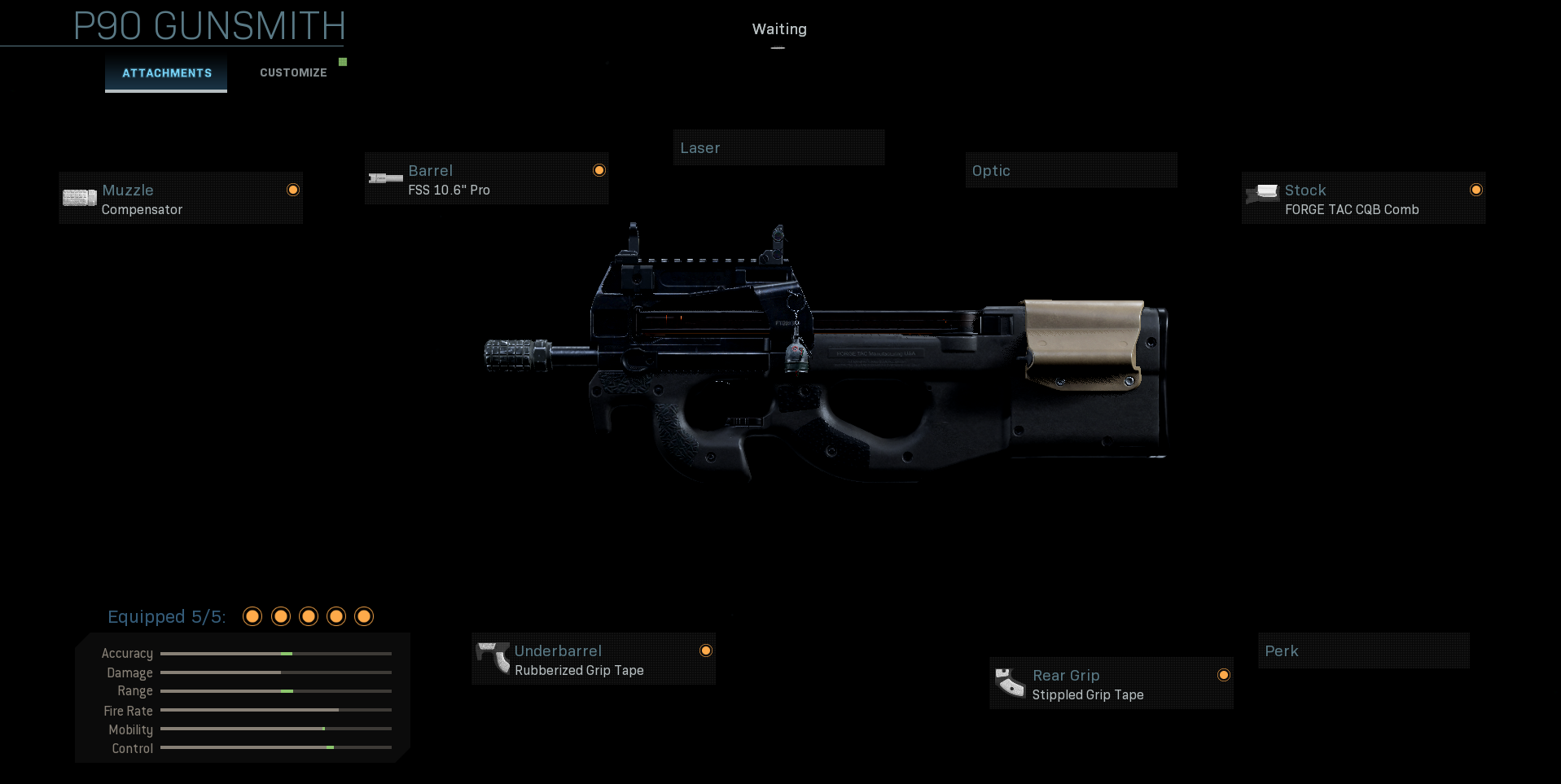 This loadout brings you a very balanced version of the P90, boosting four stats while decreasing none. Since the P90 is already a very agile SMG, the attachments focus more on accuracy, control, and range rather than mobility – although that also gets a slight increase.

This version of the P90 can be used in virtually all game modes, but if you want to play objective-based playlists, then the rest of the class lists everything that’s worth using – starting with the JOKR Launcher, which is ideal for shooting down enemy killstreaks to help your team.

Pointman is also a great Perk 2 because you can earn points for streaks by simply playing the objective and not having to rely on just kills. Trophy System is the Field Upgrade of choice, since it will defend you from explosives when trying to capture or protect an objective. The best stealthy but deadly P90 class and attachments.

For those who want to sneak around the map and catch enemies off-guard, this is the loadout for you. The attachments keep the weapon totally silent but still viable enough to use; don’t be concerned by the slight decrease to mobility, since the gun is already very agile.

Dead Silence is the obvious Field Upgrade to go with, as it renders your movement totally silent while giving you a slight speed boost. You can use the Tune Up perk to keep getting it faster, or you can go with Spotter to see enemy equipment, such as Claymores, so you can go around them and silently take down enemies who think they have their own back covered.

Cold-Blooded and Ghost will keep you off the radar when it comes to thermal optics, AI-controlled killstreaks, and UAV, while the Smoke Grenade could come in handy to stir up even more confusion.

Overkill has always been a powerful perk in Call of Duty, but Modern Warfare has taken it to a whole new level. Because there’s no pick-10 class system in this game, players who use Overkill can stack their loadout with two primary weapons that both have the maximum five attachments.

If you want to do this with the P90, our recommendation is to pair it with a weapon whose function is opposite to the SMG. For example, since the P90 is so good at close-quarter gunfights, a good gun to include alongside it is a sniper rifle or marksman rifle.

Whatever you do end up going with, it’s important to use Amped as your third perk, since it’ll help you switch between your two weapons faster.

There you have it – the best classes and attachment combos to use for the P90 SMG. Now, load back into the game, try out these these loadouts, and lets us know what you think.

Also, make sure to check out all of the other weapon guides we’ve done for Modern Warfare, such as the best classes for M4, AK-47, RAM-7, MP5, MP7, Holger-26 and bonus tutorials like how to build 15 “secret” weapons in Gunsmith.