The MP5 is not only one of the best SMGs in Call of Duty: Modern Warfare, it’s also one of the more viable weapons overall in multiplayer, and we’ve come up with the top five best classes and loadouts that cater to all different kinds of play-styles.

SMGs have and always will be a staple of Call of Duty multiplayer, and that hasn’t changed with Modern Warfare. Unlike the assault rifle class, which is dominated by the powerful M4A1, the submachine gun category has a couple of choices that are all very usable.

Most would argue that the MP5 is still the weapon to beat in that class, as its versatility and agility make it exceptional in close-range encounters, while it also has enough accuracy and power to beam enemies at medium range, which is always a commodity when it comes to SMGs.

With that in mind, we’ve put together a list of MP5 loadouts for five different variations of gameplay: run-and-gun, slower and longer range, balanced, competitive, and Overkill.

Each of these loadouts have their own sets of attachments, secondaries, perks, lethals, and tacticals. Keep in mind, however, that these classes may include stuff that you might not have unlocked yet, so if you see something that’s still locked for you, just use a substitute that has similar qualities. 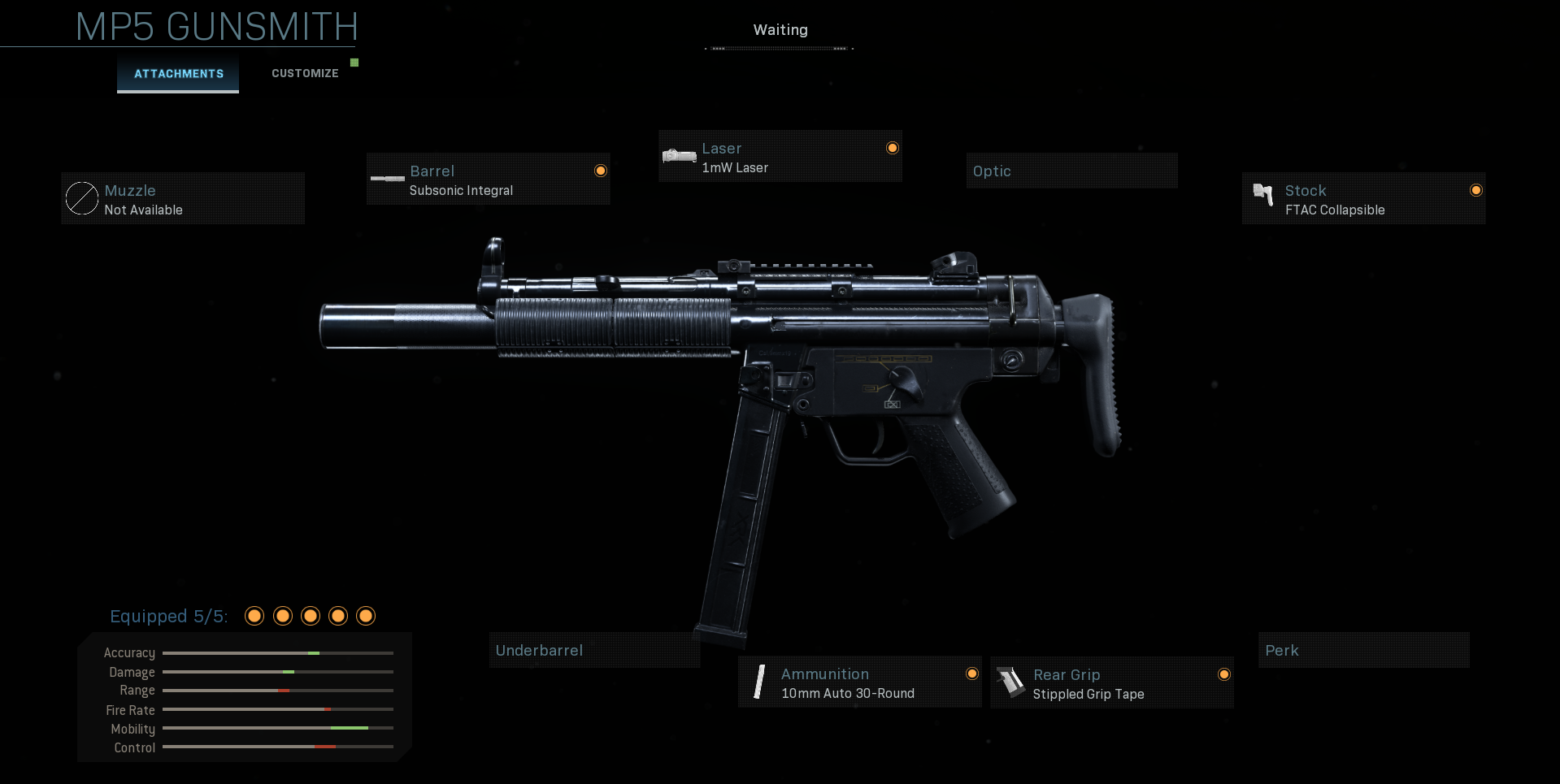 With the way that Modern Warfare has been designed, adopting a run-and-gun play-style isn’t exactly the easiest thing to do. However, if you want to rush around and get in enemies’ faces, you would do well using this loadout.

All of the attachments were chosen with the purpose of maximizing mobility, with the 10mm Auto 30-Round Mags added in there for an extra boost to damage.

This does mean, of course, that other statistics had to be sacrificed, which in this case were range, fire rate, and control. However, none of those three things are needed if you plan to run around and take down everyone at close range.

As for the rest of the class, the Combat Knife is an excellent secondary because it increases your movement speed while having it out, which is also why Double Time has been chosen as one of the perks. Stim is also useful to have because you will be able to use it twice a life to quickly regenerate your health, which could be crucial for getting into gunfights in quick succession. 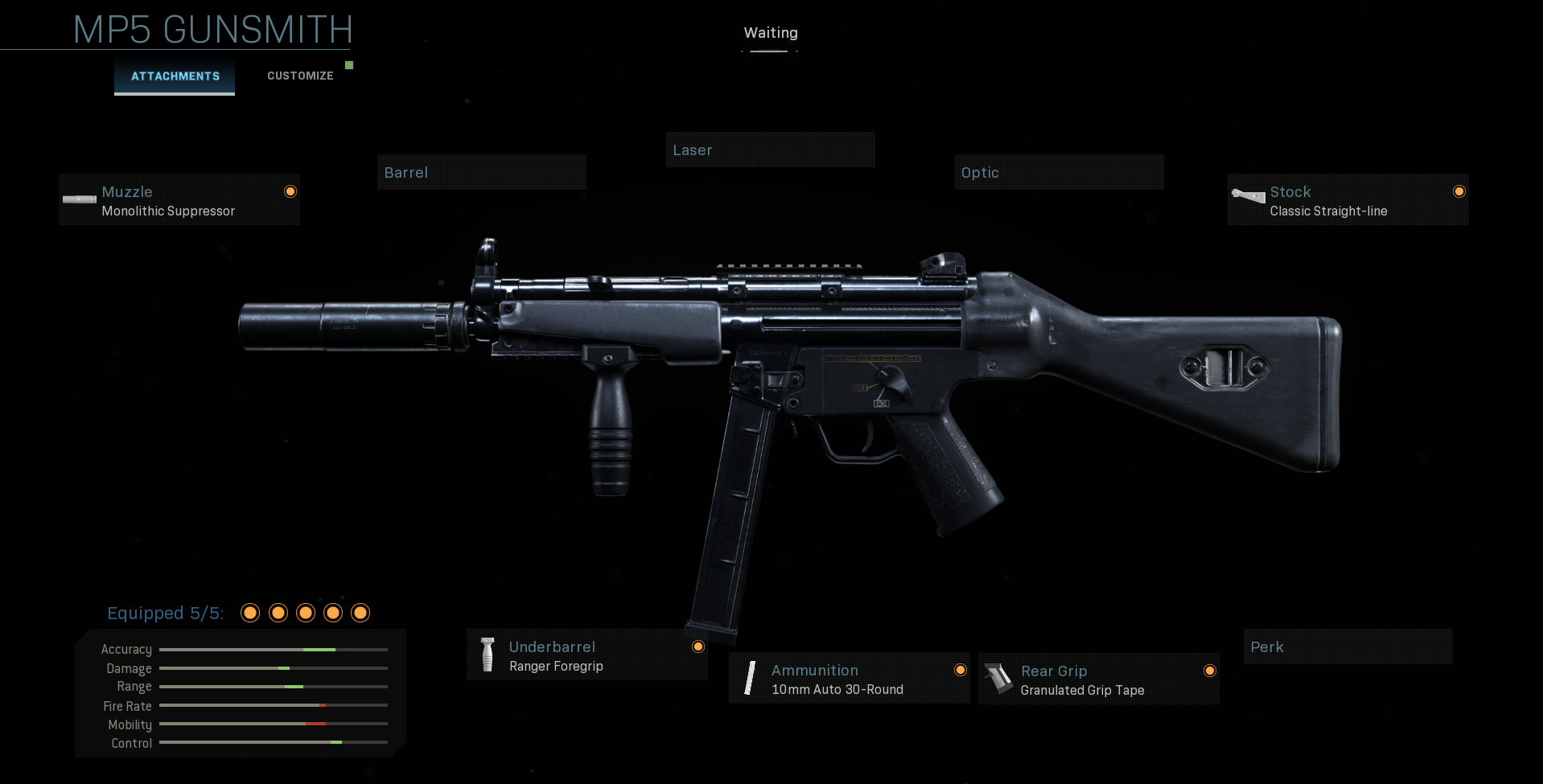 While SMGs are normally not the type of weapon one would use for a slower, tactical, and longer range style of play, the MP5’s stats make it viable enough to use in medium-range gunfights, especially when equipped with these attachments.

This loadout gives a huge boost to accuracy and decent increases to damage, range, and control, with mobility understandably taking the biggest hit. This is what you should be aiming for since you won’t need much mobility if your plan is to play slower and more tactically.

The M19 Pistol is a good secondary weapon in this case since it offers really good control and fire rate. As for the lethal and tactical, going with Claymore allows you to watch your own back and Smokes can be good for escaping if your position is getting pushed. However, you can never go wrong with a good old Frag/Stun combo either. 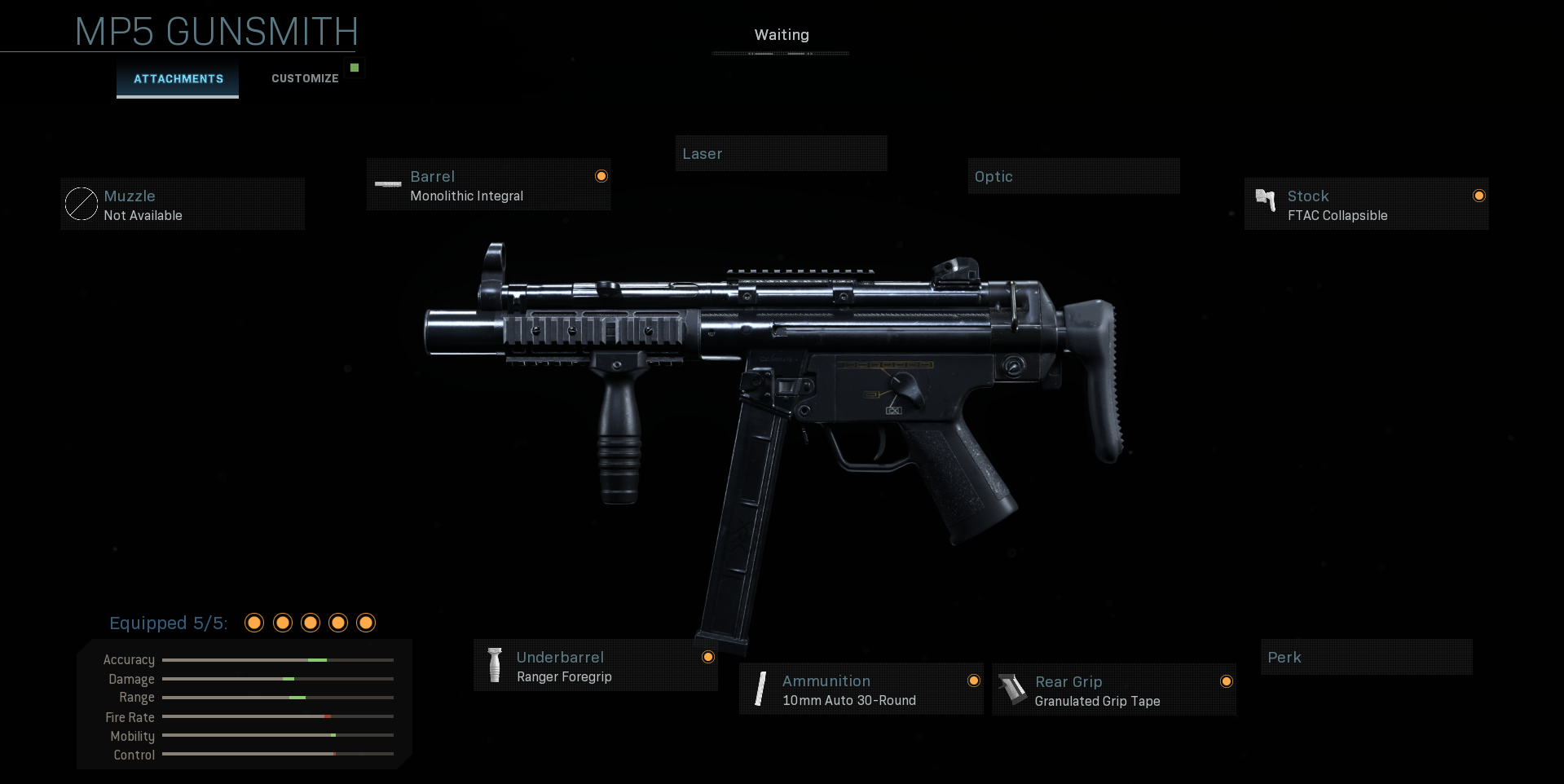 This loadout combines the best of both worlds for those who want might not be strictly dedicated to rushing around or playing slow and longer range.

None of the stats have gotten major boosts or taken big hits, as the attachments gave moderate increases to accuracy, damage, range, and mobility, while slightly decreasing fire rate and control.

Maintaining the theme of balance, you can go with either the X16 or 1911 handguns, as they both offer versatility in terms of range and accuracy. The Frag/Stun combo is once again usable here, but you can also use the Stim if you plan on doing a lot more moving around.

With the MP5 being such a good weapon in Modern Warfare, it came as no surprise when it instantly became part of the main meta used by competitive players.

Attach’s loadout is similar to our own balanced class in that it offers decent boosts to accuracy, damage, range, and mobility while slightly hitting fire rate and control. However, his version does put a little more priority on accuracy while not having as much of an increase in range.

He’s chosen the .357 handgun as its secondary, and it’s definitely a good weapon to have in your back pocket since it offers the among the best range and damage stats in the class.

As for the perks and throwables, everything is pretty standard except he’s gone with Double Time instead of E.O.D., putting more of a priority on running speed than protection from explosives. 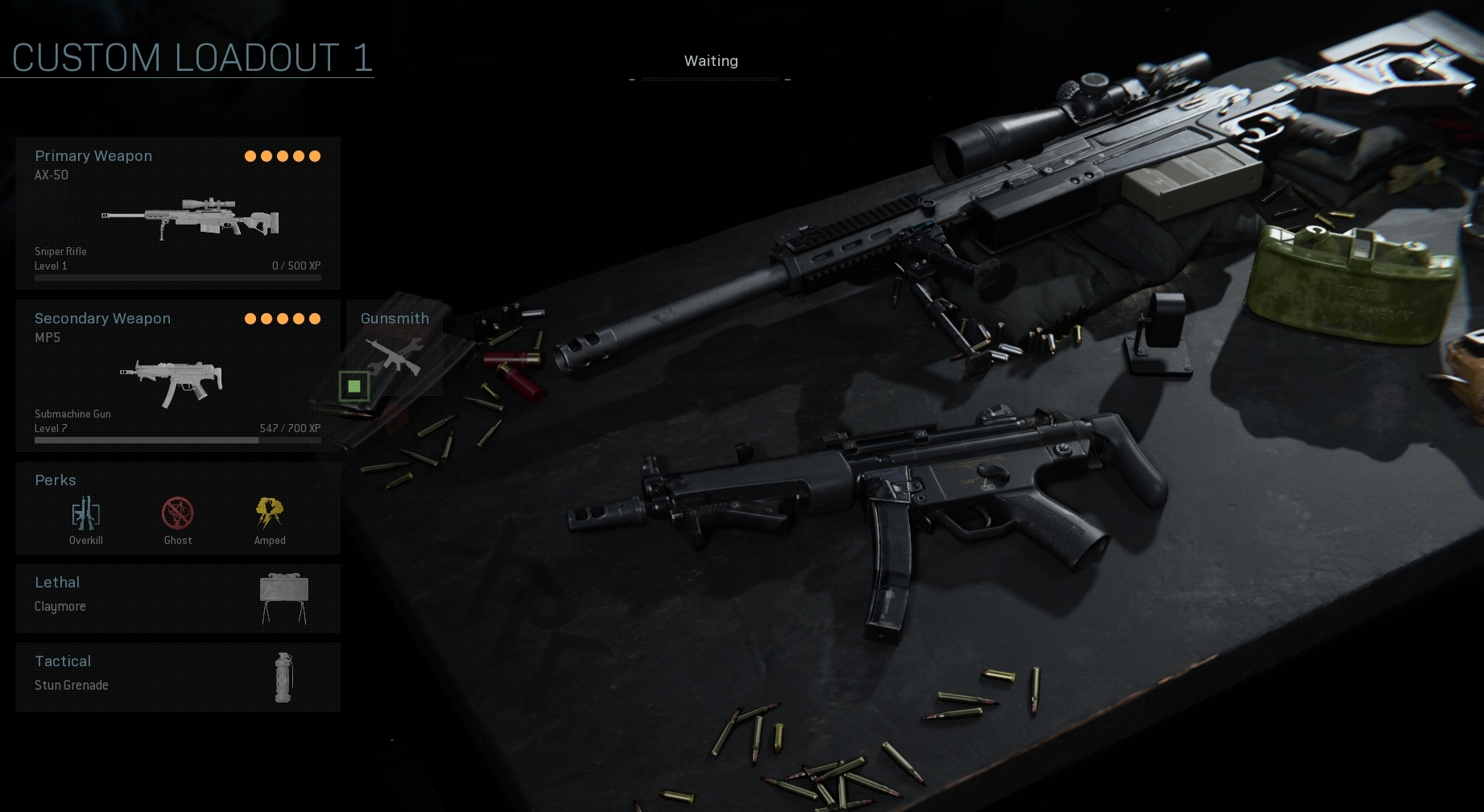 Overkill has always been a powerful perk in Call of Duty multiplayer and it’s even more so in Modern Warfare. Because there is no pick-10 class system, you can max out the number of attachments you put on both weapons, meaning you can have two fully decked-out primary weapons in a single class.

With how good the MP5 is, using Overkill opens the door to a variety of options. You can use the run-and-gun version of the weapon with a stacked M4A1 as the secondary, pairing up the two best guns in their respective classes.

If you want to cover extremely long-range gunfights, you can pair a balanced MP5 loadout with a sniper rifle or Marksman rifle, allowing you to be able to engage and virtually all distances.

Of course, if you don’t care about getting other players mad, you can also use the longer-range MP5 build with a 725 shotgun to turn yourself into a machine of destruction, since the 725 is probably the most overpowered gun in the game right now.

There you have it – the best loadouts to use for the popular MP5 SMG. Now, load back into the game, set up and use these classes in some multiplayer matches, and let us know what you think!