Battlefield V Firestorm has had its first update since it released on March 25. The changes listed fixes for an array of issues, but has the looting problem been addressed?

As expected, a rather sizeable Battlefield V update has been released. Various changes have been made to both Firestorm gameplay and the map.

The core Battlefield V multiplayer mode has also been subject to lots of tweaks.

What has the patch changed?

Lots. The full patch notes for update #2 Chapter 3: Trial by Fire are listed below.

The biggest changes made to Firestorm are gadget kills not counting as real kills. There will now be a separate category for this type of kill, called “gadget kills”. This will, of course, reduce kill totals and need to be taken into account when comparing previous kill totals from before the patch. 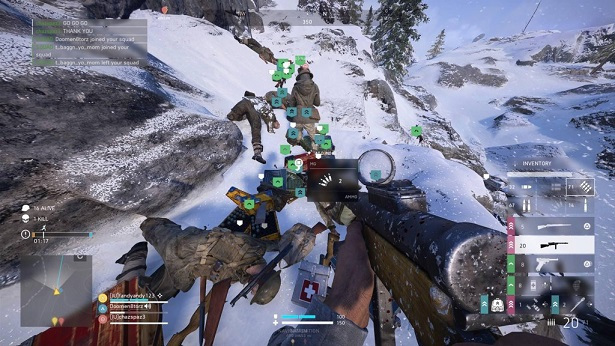 The looting in Firestorm has been improved in the latest update.

Some Firestorm players had complained about revives not always registering, whereby you had to click the revive button multiple times before it worked. The patch notes don’t make it clear whether this has been fixed or not.

Additionally, re-supply points will now be available earlier into the match. Specifically, they will start before the Firestorm starts to shrink for the first time.

Frustratingly, the patch notes don’t mention anything about looting improvements. This is perhaps the most requested change since Firestorm released and is still yet to be addressed.

However, DICE Producer Jaqub Ajmal has stated that the patch do include looting improvements. While it seems a strange thing to omit from the update notes, the important thing is that some sort of improvement has been added.

There are dropped loot behavior improvements in Firestorm. Once the new update is out, give it a try and let me know what you think!

The full patch notes for Battlefield Tides of War Chapter 3: Trial by Fire update #2 be found below.

Duos mode for Firestorm has been confirmed for sometime this month.

down state while being spectated.

• Players are now able to use the Flare Gun while in water.

• Increased the draw distance for grenades and melee weapons.

• Grenades now collide with the cover of the pickup truck instead of going through it.

would be talking at the same time.

• When in a tank, the player will no longer switch to the selected tank gun while zooming

• Added a red outline for the Artillery Strike on the map to make it more visible.

• Getting an invite from a player while looking for players enables you to join the squad.

• If the user cancels and resumes the interaction with a safe, it will always reset.

• When the player is watching another player being revived, the camera will remain in the

• The Napalm Helmet will no longer obstruct the player when aiming down sights.

• Players can now jump as soon as they reach the start of the jump location.

• When waiting for the other players, the squad list shows the correct Armor Plates

number that the player had before death.

• Players will no longer reload when opening doors.

• The loot rarity icon is no longer visible through soldier bodies and vehicles.

• When getting killed by another player, the text for the weapon used will show properly.

• The Swap and Drop button callouts are updated if the player changes the keybind ingame.

• Interacting with a safe repeatedly will no longer make the progress bar disappear.

• When the player is killed by an Artillery Strike, an icon is displayed in the kill feed.

• The first wave of capture points now start earlier, before the zone starts to shrink for the

• Improved the rock wall textures near Pluto (Dig Site A).

the lake, causing vehicles to flip if they drive over it with speed.

• Fixed a floating telegraph pole that was placed east from Nannahavn.

• The crates located west of Hansen Farms are no longer floating in the air.

• Fixed a floating tree west of the Halvoy Dam.

• Players can no longer get stuck between the gap of the barrels inside Hansen Farms.

• The shed door is no longer clipping through the barrels at Minerva Docks.

• Players can no longer interact with the backside of the ladder near Guderos.

• Player can no longer get stuck between the tree and the wall north of Minerva Docks.

• Players can no longer hide behind the waterfall South of Minerva Docks.

• Fixed an issue that was causing mild flickering around the windshields inside vehicles.

• Fixed a bug that enabled players to use airplanes during the match start timer period.

turret while using its zoom functionality at the same time.

• Made audio improvements to audibility of other players’ tanks.

• Fixed the Ribeyrolles aperture sights being misaligned and using the wrong

• Tweaked the Bren max recoil which was too low.

• Reduced the M1897 damage drop-off start distance by 1 m for all ammo types. Our data

indicated that the 1897 had a bit too much range compared to other shotguns.

• Changed the way camera recoil works. When firing, weapons are allowed to go a bit

more off center now. The true point of aim will follow the weapon and is not fixed to the

• Changed the way SMG and assault rifle dispersion increases while firing in ADS. The

predictable while later shots are less predictable. Also shortened the time it takes for

dispersion to decrease when no longer firing. This means short bursts are a bit more

effective, while long bursts or mag dumps are a bit less effective.

• Fixed an issue that would prevent shotgun damage decals to appear on vehicles.

• The knife animation no longer triggers after firing the last round of a Panzerfaust.

attenuate non-player weapons has been reduced.

• Adjusted headphone mix for low frequencies to smooth out positioning.

the player was running briefly after reviving another player.

invisible while driving the Kubelwagen in third person.

• Fixed an issue where the ticket counter was not visible when playing Breakthrough,

while being in the Your Company screen.

• Fixed a bug which could prevent players from deploying, prompting the error message

• Improved responsiveness and accuracy of the Commo Rose and the Squad

Reinforcements Rose when using a controller.

purchased and equipped something else.

into the divider line.

“Not enough Company Coin” error message even if they had enough currency.

• Fixed a bug that would cause the idle kick functionality to not always work.

• Added the soldier stance icon from single-player into multiplayer.

• Made improvements to DLSS sharpness.

mouse buttons while in the key binding menu. The player that found this must have

eaten too much pineapple pizza.

• In Firestorm, opening the map and using the “scroll” button while inside a tank in the

gunner position will no longer switch the selected tank gun as well.