The Firestorm map will be called Halvoy. While it is difficult to tell how it compares to Fortnite and Apex Legends visually, because the games play at a different pace, we can compare the sizes directly. 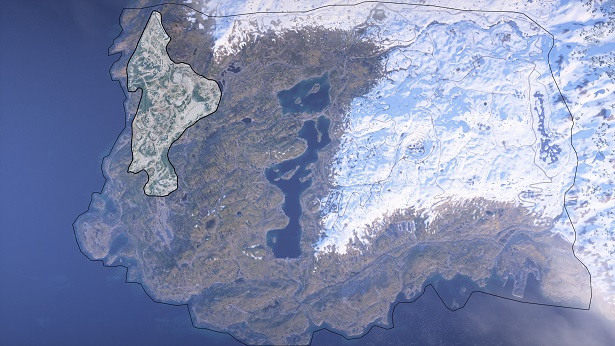 Hamada in comparison to Halvoy…

The initial Firestorm circle only covers part of the map. This is because Halvoy is so big in comparison to the 64 players that using all of it would result in too slow gameplay.

So if Halvoy is 10 times bigger than Hamada, just how big is it in comparison to other battle royale maps?

The best comparisons are Blackout and Fortnite due to their enormous player base. The Call of Duty battle royale map is 7 km squared, while Fortnite is smaller at 5.5 km squared.

Elsewhere, PUBG has a variety of maps ranging from 16 to 64 km squared. However, this is an overestimation as a lot of the PUBG maps are largely unplayable water areas.

Consequently, Halvoy is probably somewhere between Vikendi and Sanhok given its speculated 12 km squared. This also means it is bigger than Blackout, Fortnite and the Apex Legends map. King’s Canyon, as battle royale maps go, is particularly small.

The upcoming addition of Firestorm has reignited interest in the game again. Sales had been poor in comparison to expectations but there will likely be a spike when Firestorm is released.

On March 25, we’ll get to see if Battlefield’s battle royale mode lives up to the hype.