Respawn respond to complaints about hipfire in Apex Legends

A Respawn Entertainment developer has explained why they are so careful when balancing hipfire in Apex Legends, following complaints about a lack of accuracy.

One of the strongest aspects of Apex Legends is its weapon pool, incorporating a host of guns and equipment to make the Titanfall-esque battle royale as varied as it can be.

However, many fans have commented on the relative strength of hipfire, arguing that is too weak on a number of weapons. One of these weapons is the HAVOC assault rifle, which featured in recent trailers for the upcoming Season 6.

The HAVOC was one of the first new weapons to added to Apex Legends last year.

The energy ammo assault rifle has varied in its viability, but has settled in mid tier over the course of Season 5. One weakness of the HAVOC is its hipfire, which many players have suggested is below par and almost futile.

This was pointed out by Redditor ‘ChubbySupreme‘, who lamented the hip fire and pointed out a recent clip that still shows the majority of shots missing.

However, one Respawn dev responded, explaining the developer’s approach to balancing hipfire, and why strengthening it is something they have to tread very carefully around.

“There are good combat reasons why guns aren’t that accurate in hipfire,” one Respawn designer replied. “Hipfire accuracy is fundamentally about a stronger tradeoff between movement and accuracy.” 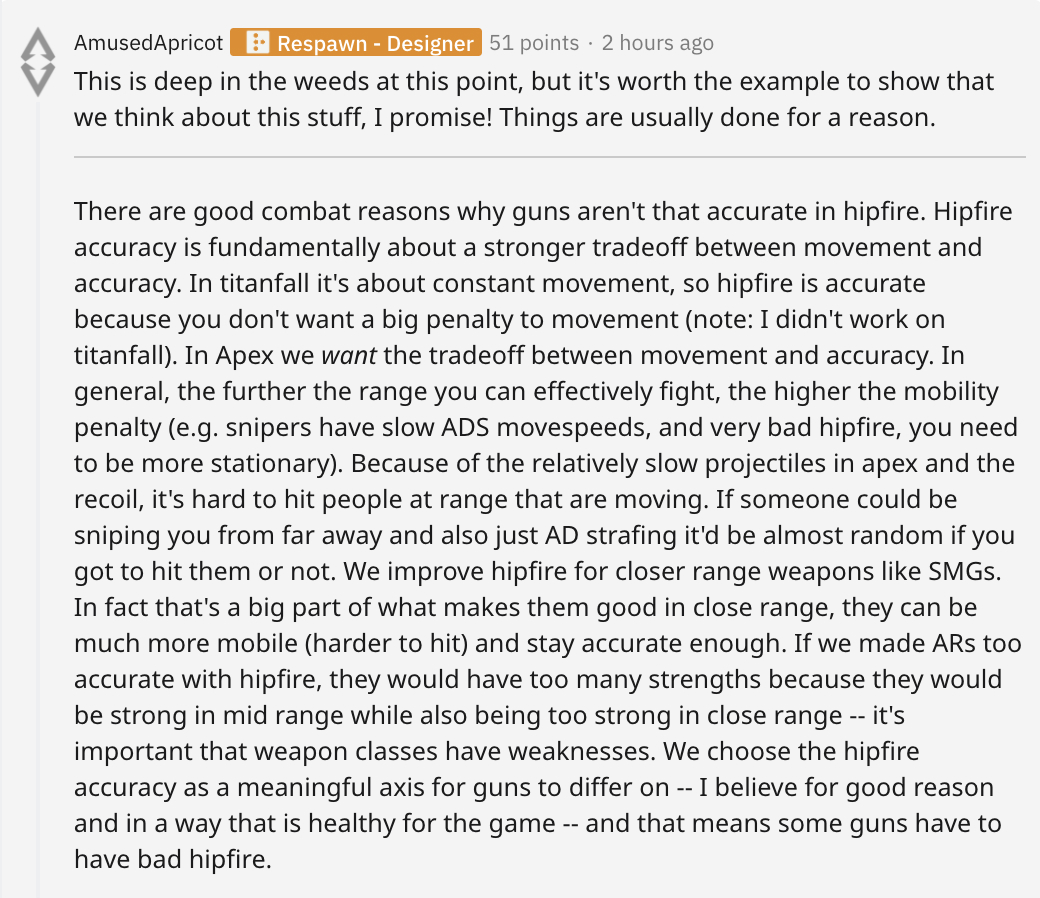 “In Titanfall it’s about constant movement, so hipfire is accurate because you don’t want a big penalty to movement,” they said. “In Apex we want the tradeoff between movement and accuracy. In general, the further the range you can effectively fight, the higher the mobility penalty.”

Essentially, Respawn want to ensure that mobility remains key in a gunfight, and players aren’t able to laser enemies while being incredibly difficult targets to hit.

They finished: “If we made ARs too accurate with hipfire, they would have too many strengths because they would be strong in mid range while also being too strong in close range — it’s important that weapon classes have weaknesses. We choose the hipfire accuracy as a meaningful axis for guns to differ on — I believe for good reason and in a way that is healthy for the game — and that means some guns have to have bad hipfire.”

It goes to show the consideration Respawn give to common in-game mechanics, and how they are striving to keep the game’s weapon pool as balanced as possible.

Any changes to hipfire will not be rushed, and Respawn clearly have their reasons.