Apex Legends Season 7 has been relatively well received, except for the “grindy” Battle Pass. Respawn have taken notice, and are vastly reducing how much experience it takes to level up.

The Apex Legends Season 7 Battle Pass has been a cause for concern within the community. The progression system has been labeled as excessively “grindy,” with Respawn making it incredibly difficult to just hit Level 2, let alone possibly Level 100.

However, after less than 24 hours of the Ascension update being live, Respawn have dialled down the battle pass grind.

We've seen a lot of feedback about Battle Pass progression being too slow. So today we'll ship the following change:

Also, starting next week, your Weekly Challenges will take much less time to complete.

“We’ve seen a lot of feedback about Battle Pass progression being too slow,” the devs told players on Twitter on November 5.

They’re also reducing the amount of time it should take to complete the Weekly Challenges. While they didn’t put an estimated figure on how much they’ll cut the grind, it should be a substantial amount given the backlash.

“Two goals for the Battle Pass in Season 7 were [to] make it engaging for the entire length of the season [and] encourage you to try out new Legends and playstyles. We think we missed the mark with the first iteration, so hopefully these changes help out,” the devs added.

The changes should apply soon, with players noticing they might have leveled up a bit further than they were previously with the star XP changes. 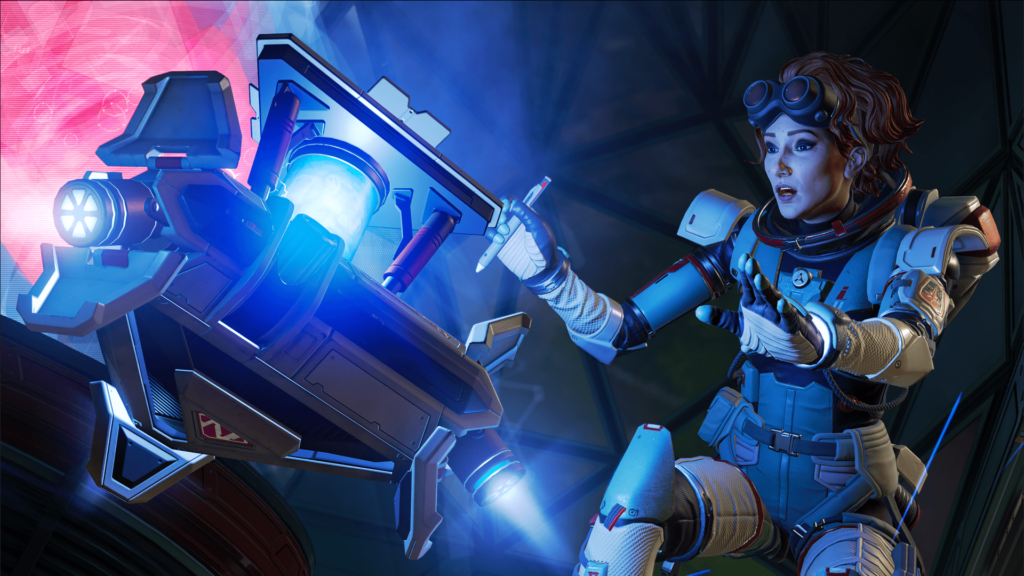 Now you can dig into the new Apex Legends Season 7 content without hard grinding the battle pass.

With players stating the grind this season was up to four times as hard as previous seasons, these changes should at least bring them more in line with previous expectations. However, it will still be somewhat more difficult to cap out your battle pass regardless.

These changes might not be the final iteration of what Respawn implement either. It’s a wait-and-see process over the next few days and weeks as players dig into the new content and push their battle pass all the way to level 100.

Players are still unhappy with the changes

Despite Respawn Entertainment’s best efforts to address the battle pass controversy, it seems that the amendments haven’t appeased everyone. One of the Apex Legend‘s most popular, trending sub-Reddit’s is currently full of unhappiness towards the changes.

A user named Xzanos had addressed the issues and what needed changing, even prophesizing any potential changes. The changes made were extremely similar to Xzanos’ comments and people are not happy about it.

Xzanos had originally said: ” What respawn is doing is a negotiation tactic that asks too much of the other party expecting backlash. Then you reel in the offer appearing “generous” and put it to a still favorable state for you. This is likely what will happen with this battlepass.

Respawn will change the system to be not QUITE so bad but still terrible. Before this if I saw that some of these challenges had doubled id be fucking pissed but now that they’ve tripled or more? I’d welcome “just” double. Not to mention that they’ll likely cut the costs to get a star via xp to 5k which is still egregious but when it isn’t 10k it’s welcomed with open arms.

Don’t take whatever half measure of a fix they have cooked up. “ 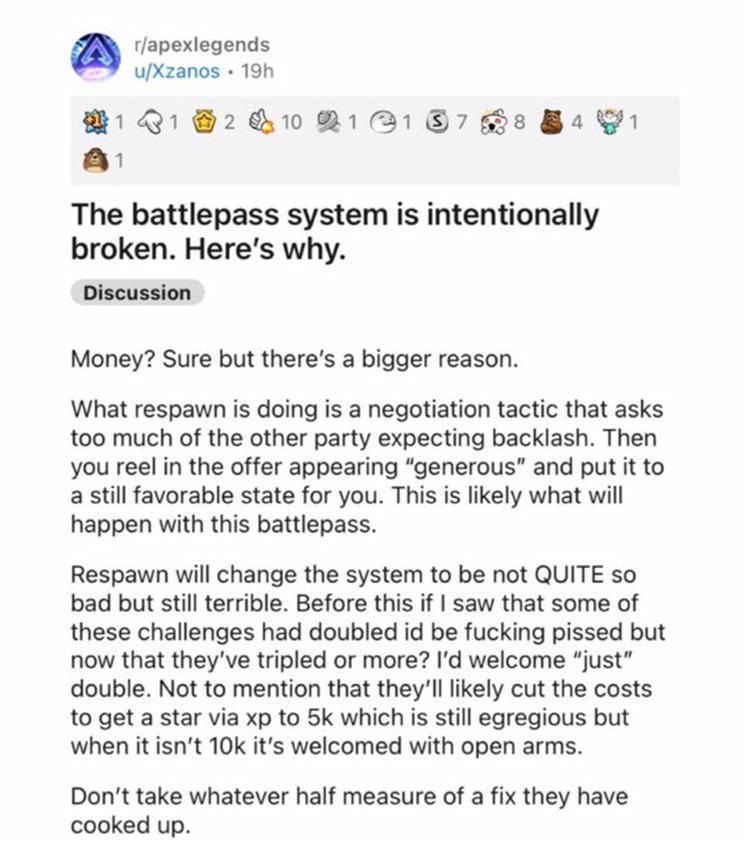 Not long after this statement, Respawn tweeted the aforementioned changes to the battle pass. This caused dismay, particularly with Xzanos who addressed the statement: “Goddamnit Respawn I call out your bulls**t and then you do it right in front of us. This is ridiculously disrespectful.”

It seems likely that Respawn’s changes did reflect the comments made by Xzanos, and they still didn’t address the issue as a whole. Upon this realization, the subreddit offered some interesting comments regarding Respawn’s decision.

One user – Bajeer – commented on the changes with some unfavourable words, he said: “It was so obvious this is what was going to happen too. They’re ignoring the real problem and it seems intentional.

Dailies are the biggest problem. Respawn has made them take way longer and they are way more important to leveling now. If you don’t log on and spend a couple of hours every single day doing your dailies you won’t complete this pass without a ton of grinding or buying levels.

The quick “fix” they gave us still leaves a massive grind and ignores the dailies. Until they do something to change dailies my opinion of this battle pass won’t change. It’s horrible and I won’t buy the next one.”

It will be interesting to see how Respawn – and EA – handle these latest reactions. Will they end up making further changes? Or risking alienating their player base?