Respawn Entertainment have released new information in Apex Legends about the upcoming Season 4 Legend Forge that reveals the class type of his abilities, and how he compares to the other characters.

There is a lot of excitement and anticipation in the Apex Legends player-base for Season 4, which will, of course, introduce the brand new Legend name Forge.

Forge, whose real name is Jimmy McCormick, is a muscular fighter who has received cybernetic enhancement, including the Shattered Gauntlets that he uses to “batter his opponents into submission.”

On January 24, Respawn put out some graphics of new details about him, including his age, height, weight, striking force, and draw speed, and how they compare to some of the other Legends.

While most of the info is purely cosmetic and for Apex lore, some of it can be useful in helping determine how Forge will look in-game, such as his height and weight, especially when using other characters as reference points.

Forge is the confirmed new Legend for Apex Legends Season 4.

How Forge compares to other Legends

The first comparison Respawn made was between Forge and Gibraltar, who is also a large-figured character.

Turns out that the new Legend is actually a bit taller than Gibby, meaning his figure will be pretty imposing in-game.

He does weigh nearly 30 pounds less, however, so he might not take as much space on the screen. Furthermore, his draw speed is considerably less than Gibraltar’s, which means he could have faster movement when it comes to activating abilities and switching between weapons. 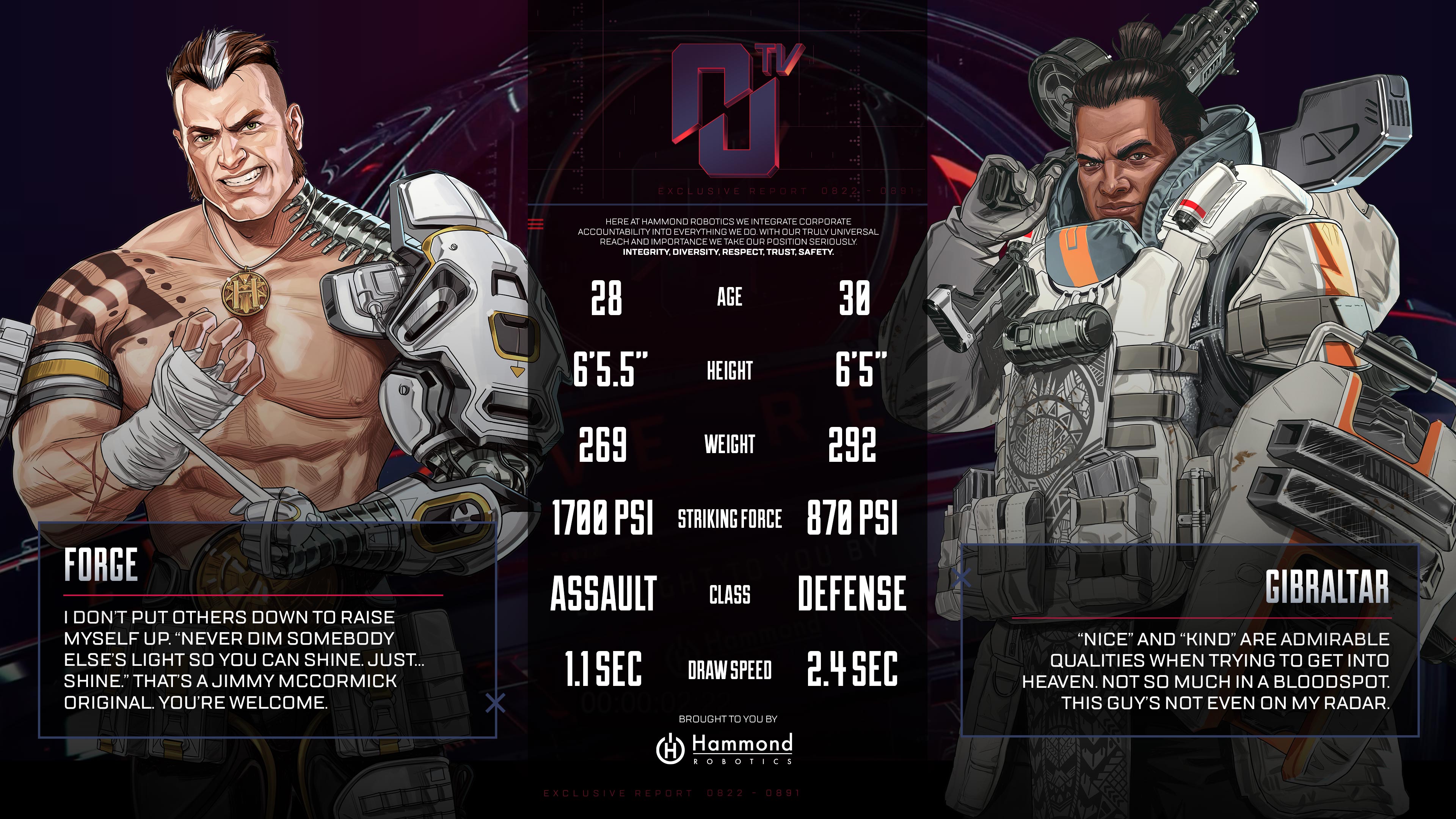 How Forge compares to Gibraltar in Apex Legends.

The next Legend Forge was compared to is Pathfinder, who comes in as slightly shorter, which gives further clarity to how big the new character will look in-game.

However, the weight can be discounted here because he is a robot built with large hunks of steel, a fact that can be easy to forget because of how nice and joyous he is.

Forge’s draw speed is slightly higher than that of the robo-Legend, but the difference is probably too minuscule to really matter. 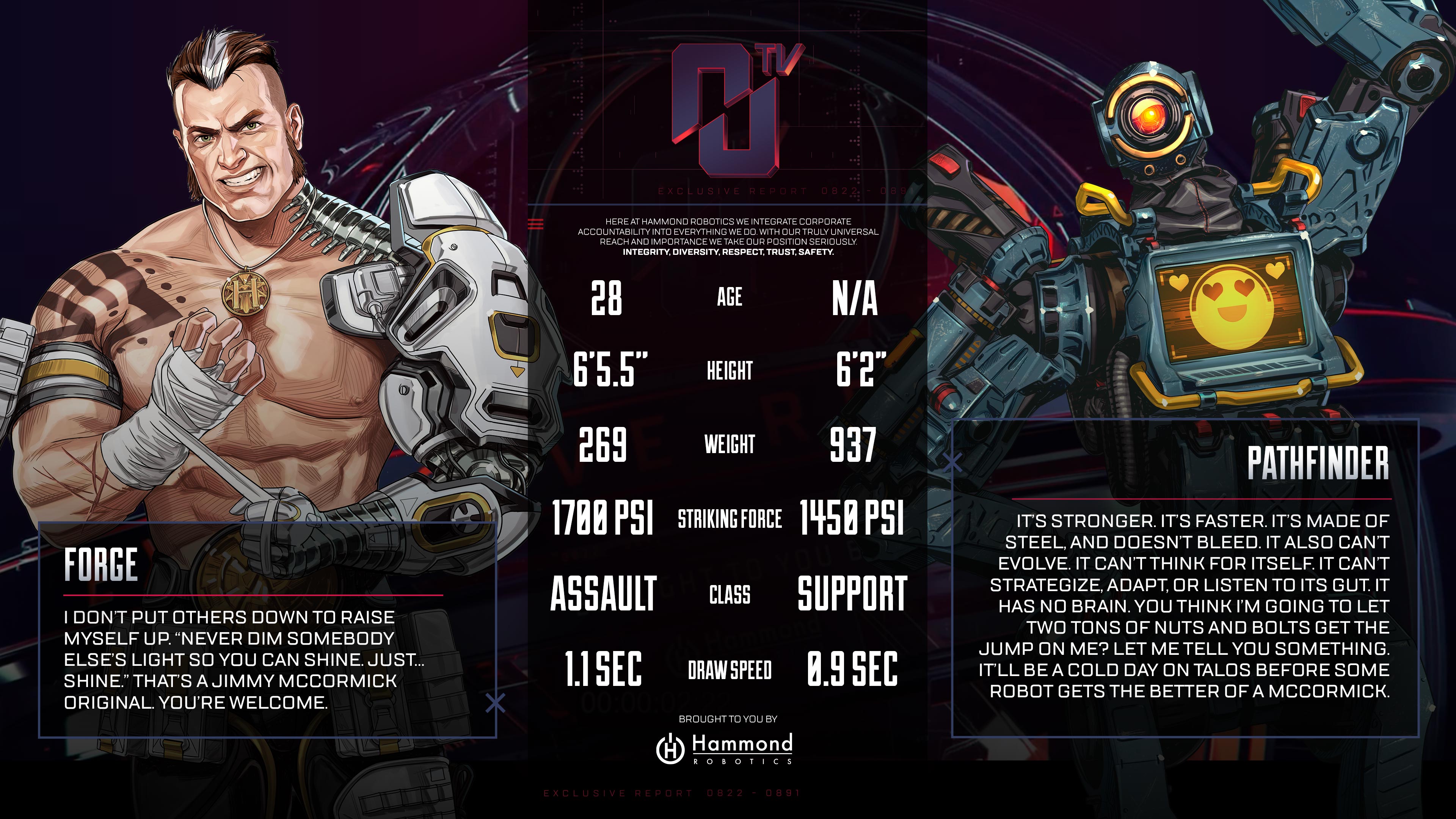 How Forge compares to Pathfinder in Apex Legends.

Last but not least – Bangalore. Unsurprisingly, the demolition-class Legend is considerably both shorter and lighter than Forge, which likely means he will appear as a larger figure in-game.

Due to the size difference, it’s no surprise that her reaction time is lower; it’s fair to say that Forge will be much more of an “in your face” type character than Bangalore. 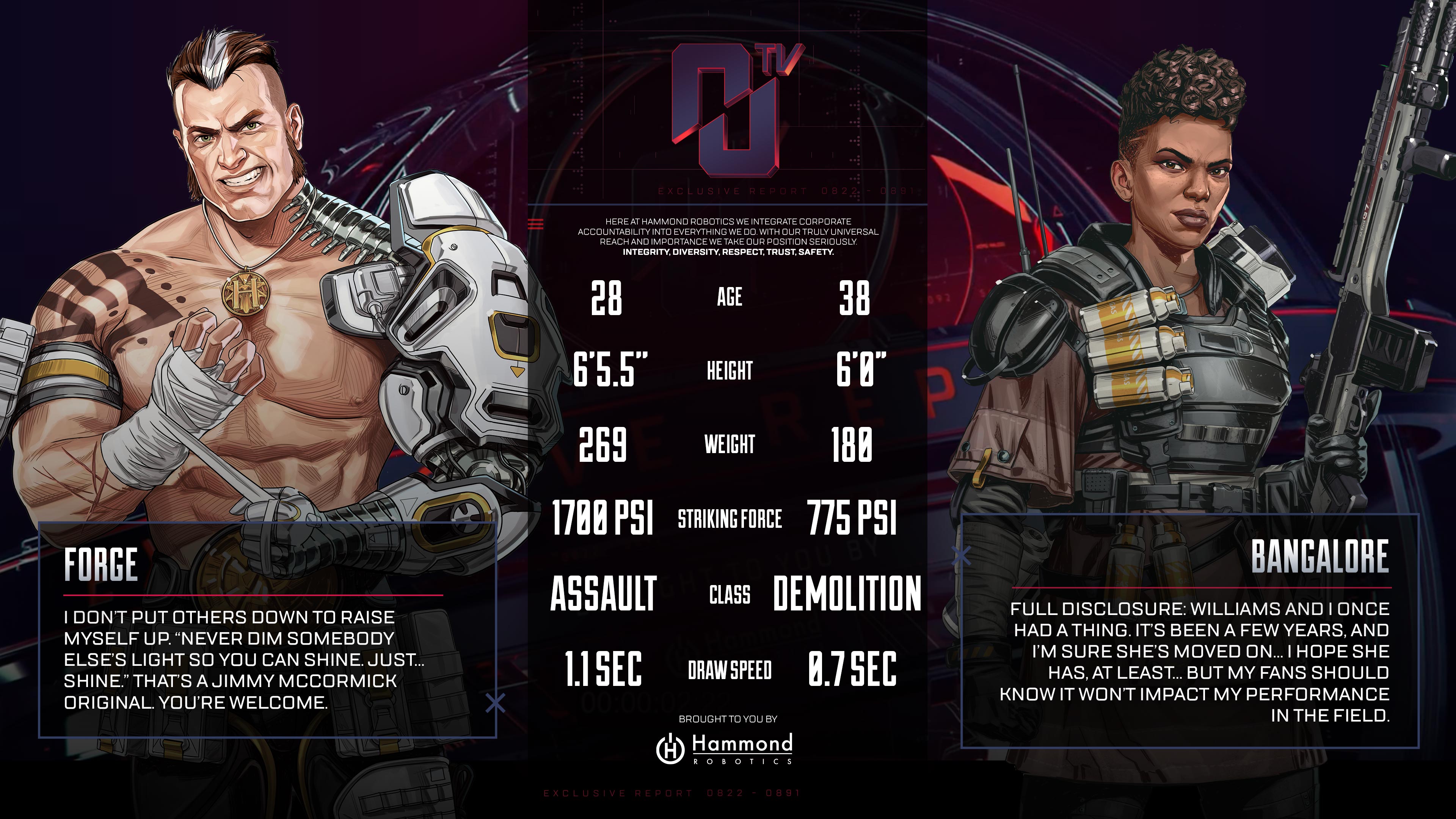 How Forge compares to Bangalore in Apex Legends.

One thing that this new information does help clarify is what type of Legend Forge is going to be, in terms of the function of his abilities, which have not yet been revealed.

There are three main types of Legends – offensive, defensive, and support – so the fact that Respawn have labeled him as “assault” makes it pretty clear that he’s going to be offensive.

This makes sense, not only because of how he looks but also because of the abilities that he will feature, which were leaked by dataminers.

His leaked Tactical, Passive, and Ultimate abilities all have to do with punching, smashing, and slamming, which would certainly fall under the category of assault.