The L-STAR is one of the most unique weapons in Apex Legends, but how can you master this high-damage energy weapon to secure yourself a dominant win?

Apex Legends’ L-STAR has been in a tricky spot for a while now. However, the Respawn’s recent Olympus patch has finally given this energy weapon the kick it needs to become viable. The L-STAR performs very differently to the majority of weapons in the game due to its overheat mechanic, which allows players to continuously fire until the gun overheats.

While it certainly doesn’t lack in the damage department, it can be tricky to master due to its slow projectile speed and recoil pattern. As a result, many players often ditch the L-STAR in favor of the game’s more reliable weapons. However, if you’re willing to put in the time to master the L-STAR, you’ll be able to capitalize on its incredible kill potential.

In order to help you make the most of the L-STAR, we’ve put together some quick tips that will aid you in your quest for success.

The L-STAR can down foes in just a few hits, provided you land your shots.

Before you go blasting anything that moves, you’ll want to get to grips with the L-STAR’s damage profile first. After all, this gun is capable of some dizzying damage numbers. This is especially true when you land those all-important head and body shots.

While the L-STAR will overheat after 22 continuous shots (26 with Modded Loader), it still deals decent damage across both close to medium engagement ranges, particularly when you fire it in short bursts. The full damage breakdown for the L-STAR can be found below thanks to the Apex Legends wiki. 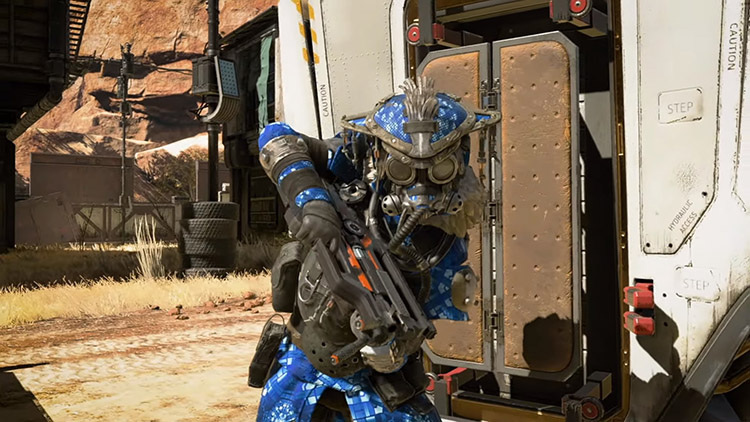 Unlike the majority of guns in Apex Legends, the L-STAR allows you to keep firing at your target as long as you keep under the overheat threshold. This means you can maintain pressure if you simply fire in short bursts and have the necessary ammo.

This can be rather difficult to do, especially when you get caught in the heat of the moment. Many L-STAR users simply hold down the trigger when fighting, but you’ll want to avoid this habit if you wish to avoid being stuck in a lengthy cooldown animation.

While the buff to the L-STAR’s has made it more useable, you’ll still need to lead shots at range.

Due to the overall bulk and size of the L-STAR’s rounds, the projectiles are incredibly slow when fired at range. This can make landing any shots incredibly difficult outside of close-quarter firefights. As a result, you’ll either want to switch to a different weapon entirely or lead your shots.

When using the L-STAR at mid-range distances, try to predict where your target will be and shoot just ahead of them. This can be pretty tricky on more mobile Legends like Wraith and Octane, but a few well-placed shots will quickly stop them dead in their tracks.

Pair the L-STAR with a ranged weapon

It’s often best to save your ammo for close-quarters firefights.

To compensate for the L-STAR’s high recoil and slow projectile speed, it’s often best to simply pair it with a long-range weapon. This will instantly alleviate any frustrations that come from trying to hit any targets at range.

The L-STAR has one of the slowest ranged projectile speeds in the game, so you’ll often find yourself outclassed in situations where you need a little extra precision. Having a gun that you can quickly switch to during mid to long-range firefights will certainly cover up the L-STAR’s main weakness.

The L-STAR’s recoil is still a little tricky, but the recent buff has made it a lot more manageable.

One of the main reasons a lot of players previously disliked the L-STAR wars due to its unwieldy recoil. However, Respawn has now alleviated this issue by giving it a new recoil pattern that has lowered the sporadic nature of its kick.

To avoid any frustrating deaths and to increase your overall accuracy, you’ll want to head into the practice range and unload your entire clip into the nearest target. The LMG will start to move to the left of the screen, then climb vertically. As soon as the L-STAR begins to kick upwards, simply pull down on your mouse/analog stick to keep your shots on target. This new recoil pattern is incredibly manageable and requires next to no recoil control when fired from the hip in close-quarter fights.

So there you have it, five tips to help you master the L-STAR LMG. If you found this guide helpful, then be sure to follow @TitanfallBlog for all the latest Apex Legends news.

Revenant Heirloom concept would be perfect for Apex Legends

An Apex Legends player has developed an incredible concept for Revenant’s Heirloom. The impressive design is centered around his backstory and would be the perfect signature weapon for the Synthetic Nightmare.

Heirlooms in Apex Legends are extremely rare and difficult to obtain, making them a prized possession. At the time of writing, there are seven Heirlooms in-game with each of them belonging to a specific Legend.

Of course, this means that the appearance of these items has to be absolutely perfect. The Heirloom has to embody the Legend it represents and incorporate aspects of their character and lore into its design.

One character who is still waiting for his Heirloom to be added to the game is Revenant. Well, an Apex Legends player appears to have done Respawn’s work for them with an impressive concept for Revenant’s Heirloom.

Revenant was released into Apex Legends at the start of Season 4.

The post, made by VerbatumTurtle, includes a detailed and custom made image that reveals the reasons behind each of the design choices.

The Heirloom itself is called ‘Death’s Head Kusarigama’ and is modeled in the shape of the traditional Japanese weapon. At the base of the Heirloom is Revenant’s signature skull, inspired by his ‘Death Totem’ ultimate ability.

Attached to the skull is a chain that represents his “past life… a life where he experienced pain, and death.” This is no doubt a reference to Revenant’s life as a normal human before he was transformed by Syndicate and Hammond Robotics. 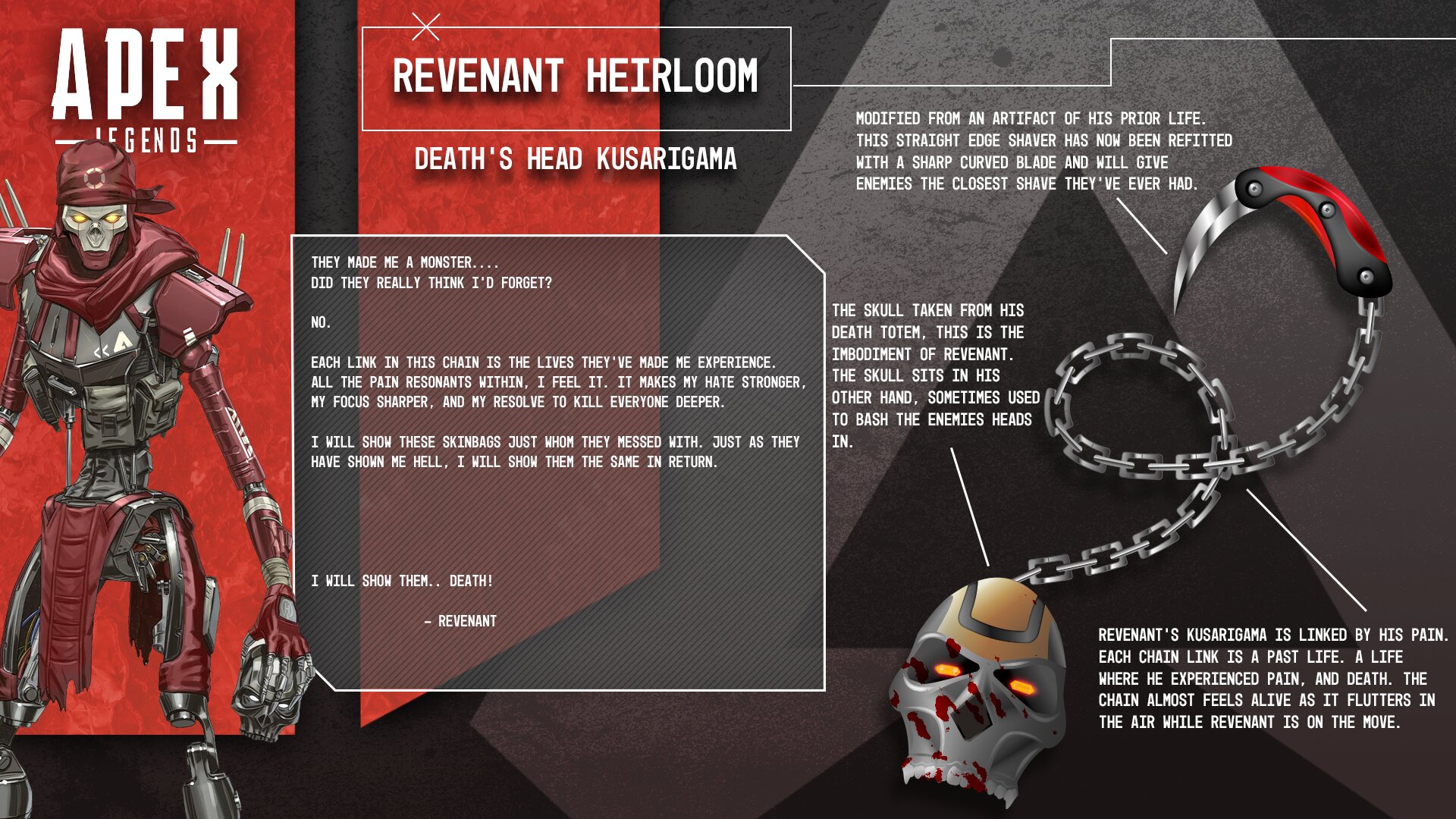 Finally, on the end of the chain, the design incorporates a modified version of Revenents’s straight edge shaver. This is a direct reference to the Season 4 cinematic that sees Revenant using a shaver from his past life as a robot. The artifact serves as a reminder of what he once had and everything that has been taken from him.

It’s fair to say VerbatumTurtle has created an incredible Heirloom that any Revenant main would be thrilled to use. The design is not only perfectly themed for the Legend, but it also incorporates aspects of his lore and backstory.

We’re sure Respawn already has their own plans for a Revenant Heirloom, but they have been known to take inspiration from the community before.