Apex Legends’ Revenant isn’t an easy Legend to play, but once you know how to use his kit correctly, he can be extremely difficult for opponents to deal with. There’s no better time to pick up the Synthetic Nightmare, so let’s jump into how you can master Revenant.

As Apex Legends continues to progress, Revenant has become one of the battle royale title’s most divisive Legends.

After dominating during Season 9 alongside Octane, the devs admitted that changes were coming in Season 10, and they delivered with some serious nerfs to his Death Totem Ultimate.

For player’s who love to play aggressively and take gunfights wherever they can, Revenant may be the perfect Legend for you. Although he can be difficult to use at first, this guide should have you dominating your matches with his powerful kit in no time.

How to make use of Revenant’s abilities

Revenant’s passive ability allows him to crouch walk at the same speed as regular walking, and since crouch walking silences footsteps in Apex Legends, it’s definitely something you want to take advantage of.

You can use this speed of movement to sneak up on enemies who won’t hear you coming, and when engaged in gunfights, can combine it with strafing to make your character a lot harder to hit.

In fact, unless you need to sprint to reach a specific area or escape the onrushing storm, you should probably limit most of your movement to crouch walking.

Finally, Revenant is receiving a buff to his climbing abilities in the Genesis Collection update, allowing him to ascend up significantly higher terrain. This means finding flanks will be incredibly effective and is going to be a key skill all Revenant players will have to master.

Revenant’s Tactical ability allows him to throw a device that deals damage and disables an enemy’s abilities.

Revenant’s Tactical ability allows him to throw a device that deals damage and disables an enemy’s abilities. The silence lasts for 15 seconds total and the device will stay on the ground for 10 seconds, allowing you to block off doorways and corridors.

Although this ability doesn’t do a significant amount of damage, make sure you’re using it to zone enemies into an area that you can control. On top of this, it’s perfect to use on an opposing squad just before an aggressive push to give you a big advantage in the skirmish.

Death Totem is amazing for an aggressive push on an enemy squad.

Revenant’s Ultimate allows him to drop a totem that protects those who use it from death for a set amount of time. Instead of being killed or downed, users will return to the totem.

It’s worth noting that you’ll respawn with 50% health and whatever shields you originally had equipped before using the totem. Additionally, in the most recent patch, there were more visual and audio cues that let players know when enemies have entered death protection.

Revenant’s Death Totem is definitely his most impactful ability and can help your squad win a skirmish with ease if used properly, As your whole team can use the Ultimate, it gives you a huge advantage over your opponent and is perfect for aggressive players who love to go for high-kill games.

Remember to collect Ultimate Accelerants as Revenant’s Death Totem is an ability you always want to have access to.

Revenant’s Death Totem Ultimate ability is obviously a huge part of what he brings to the table, and you should be smart with where you actually place it every time.

Keep in mind that when using the Death Totem, you and your teammates will be teleported back to the item instead of being downed, which sets up the opportunity for enemies to counter the ult by placing Caustic’s Nox Gas Traps right beside it, or shooting at your team once you’ve spawned back in.

Flanks like this have been made even easier with the Season 10 introduction of the slow upon return and the audio/visual cue when players are about to return to the totem, so that’s why it’s important to place the ult in a secure area that’s behind cover so that opponents won’t be able to find it and trap you or wait until you’ve spawned back in with low health to eliminate you.

Avoid placing the Totem in doorways or anything that can open and close, either, because if a door is closed on it, it will be destroyed.

2. Be wary of Death Totem’s range

The Death Totem doesn’t have unlimited range, so be wary of how far you can travel away from it.

When activating Revenant’s Death Totem, always remember that its effect only applies when you’re within a certain radius of the Ultimate, highlighted by a light blue boundary on your screen.

If you leave this range, your character will no longer be in shadow mode, and will be susceptible to taking damage as normal. However, it might be a good idea at times to go past these boundaries, especially if you suspect that an enemy team has placed traps around your Totem or is looking to sabotage your team when you respawn there.

This is something to keep in mind when you activate the ultimate: knowing how far you can go while staying in shadow form and being wary that sometimes leaving the zone could be the better tactic.

Revenant’s Stalker passive unlocks a world of new possibilities when it comes to movement – something you should always look to exploit when engaging enemy players and teams.

Most players won’t be used to how high the new Legend can climb nor how quickly he can crouch walk, so you can use both mechanics to bamboozle opponents.

Remember that misdirection is key, so you can run around to make noise, then quickly and quietly crouch walk the other way to create confusion. There’s also the option of quickly climbing up a high ledge – one that other Legends might not be able to reach – and throw off enemies that way.

4. Use your tactical and weapon at the same time 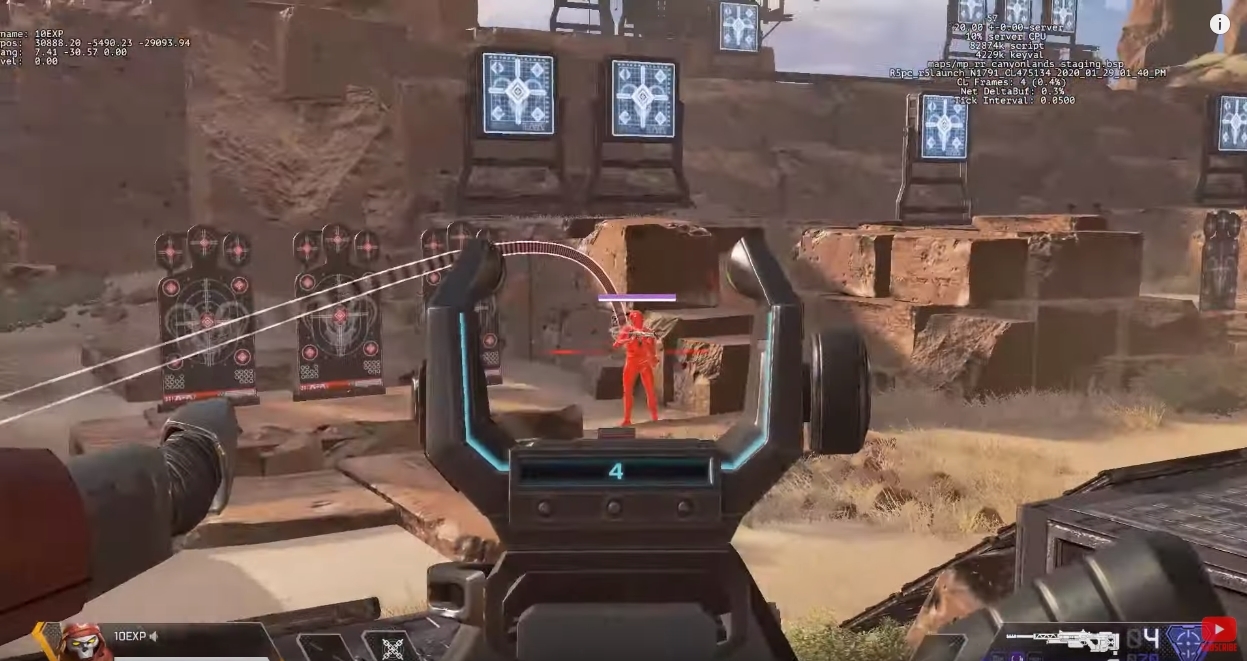 You can aim down sights when throwing Revenant’s Silence to improve your target accuracy.

What most players haven’t realized yet is that, when using Revenant’s tactical ability, your other arm can be used for something else.

For example, you can shoot your weapon at an enemy while throwing the Silence, doubling up on the damage. In fact, you can even aim down sights with your gun, which will improve your accuracy with the tactical.

Another good tactic is to prime an Arc Star at the same time; throwing the explosive and the Silence in tandem will both deal damage and completely shut down any enemy, rendering them a sitting duck ready for the taking.

Hopefully, this guide has given you plenty of tips and tricks to completely master Revenant, the Synthetic Nightmare. No other Legend has the ability to play as aggressively and recklessly as him, so make the most of it! Make sure you follow @TitanfallBlog for all the latest Apex Legends news and updates.

Looking to dominate the Apex Games? Here’s all of our Legend guides: