Following Apex Legends’ big Season 4 update, players have been reporting a ‘DXGI_ERROR_DEVICE_HUNG’ bug, and Respawn have responded with a temporary fix for NVIDIA graphics cards on PC.

Apex Legends players have encountered many issues during its one-year tenure in the battle royale realm. From the infamous code:leaf error, to another DXGI related issue during Season 2.

While Respawn have jumped over each hurdle as they’ve come, the team could be doing without additional challenges as they continue to roll-out content for Season 4. However, another bug has been plaguing Legends far and wide.

The ‘DXGI_ERROR_DEVICE_REMOVED’ error also plagued players for some time.

According to the error message, the “application’s device failed due to badly formed commands sent by the application.”

Put simply, there is a breakdown in communication between Apex Legends and the hardware interface (usually GPU), which DirectX is responsible for.

Since DirectX essentially pools various application programming interfaces, the software acts as the middle man between NVIDIA’s GPU and the battle royale.

As per Respawn’s message in the Apex Legends Tracker, they are “working closely with NVIDIA to help determine the cause of the issue and provide gamers with a solution.” 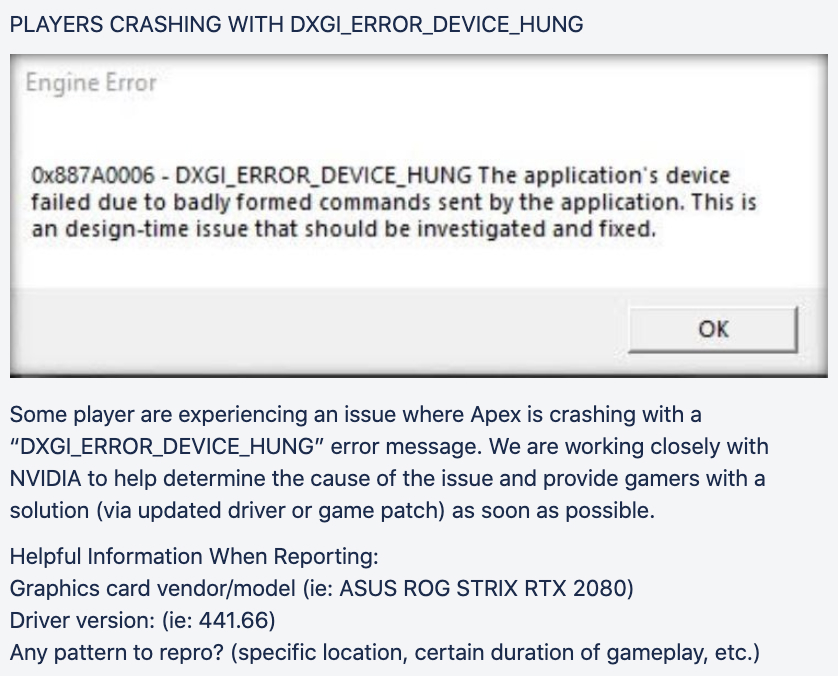 How to fix ‘device hung’ error

While Respawn has not provided Legends with a direct patch to the issue, there is a workaround and it’s downloading the latest Game Ready driver from NVIDIA. This should solve the issue, but if it doesn’t, then players might have to consider setting their drivers back.

As per Garza’s message on the Trello card, plenty of players are experiencing “little to no crashing” when rolling back to earlier versions of drivers.

Respawn have responded with a temporary fix to the issue.

To roll back your drivers, open Device Manager (located in your Control Panel) and locate your graphics card under ‘Display Adapters.’ Right-click and select ‘Properties’ and then go to the ‘Driver’ tab and select ‘Roll Back Driver,’ as shown in the image below.

Here’s how to roll back your drivers on Windows platforms.

While this by no means permanently fixes the issue, it does offer a temporary solution for those looking to hop into a server while Respawn continues to investigate the issue.

Be sure to bookmark this page, as we will update this article with any updates on the error as and when the developers release them.