Apex Legends players who play on PC have been running into a strange issue which sees the game crash during the character select stage, but one fan has found a temporary fix that should avoid it momentarily.

For over a week, players have been suffering from a glitch that sees game crashes if your teammates move their mouse over selected heroes while picking their own Legend, kicking players out of matches and forcing them to restart their game.

Now, it appears that one Apex Legends fan has discovered a temporary way to solve this issue, while Respawn Entertainment hopefully work on a solution to the frustrating bug.

Players who try to select their characters are seeing their game crash.

How to avoid Apex Legends crash while choosing characters

According to a post on the EA forums, player Saltyfighter has found a way to escape these annoying crashes while playing the game, and it involves not looking at the game while character selection is underway.

According to the player, if you press the Alt’ and ‘Tab’ buttons on your keyboard and change the focus to another window, such as an internet browser or your home screen, you will be able to remain in the game.

The player states that while his teammate was crashing at least once every three games before, using this trick allowed him to play over 20 games consecutively without the game ending prematurely. 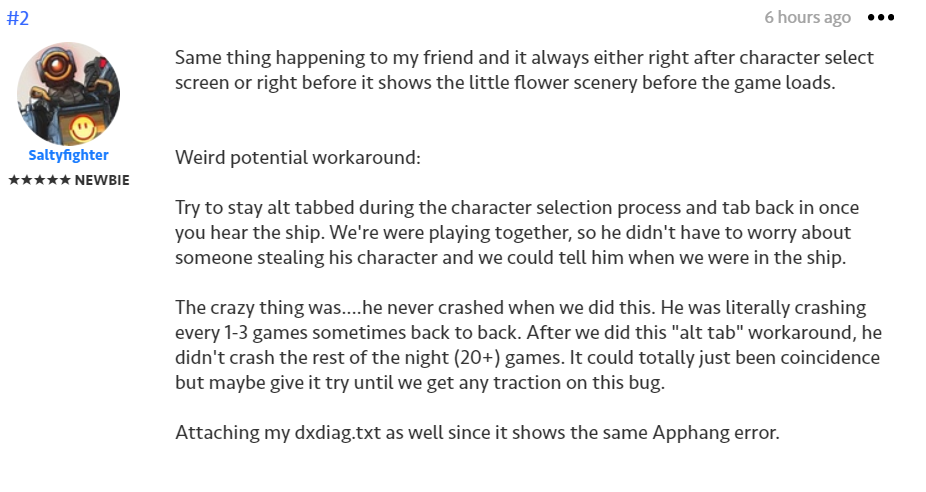 The suggestion was posted on the EA forums.

Saltyfighter suggests that you stay tabbed out of the game for the entirety of the character selection, and return once you hear the dropship moving over the map, which should allow you to jump into a match with no issues.

Unfortunately, this means you will be at the will of Apex Legends as to which character you will end up with, as you won’t be able to see the character selection screen to choose. It should at least give you the opportunity to play matches rather than watch the game crash though, for those who are desperate to be named Apex Champion.