It’s no secret that Gibraltar is capable of taking more damage than any other character in Apex Legends, but just how much punishment the big man can actually survive has some players scratching their heads.

Gibraltar has been around since day one of the Apex Games and he’s always been a little more solid than most other Legends, but a series of recent updates have made him bulkier than ever before, with players recently calculating he could theoretically soak up over 300 damage before being knocked.

This led Reddit user O0804 to explore the maximum amount of damage the character could take under the most ridiculous of circumstances, even though we’ll probably never see things get this far.

Though the post is tagged as humor, it does raise some interesting questions about how much fire the legend could potentially soak up during a fight. 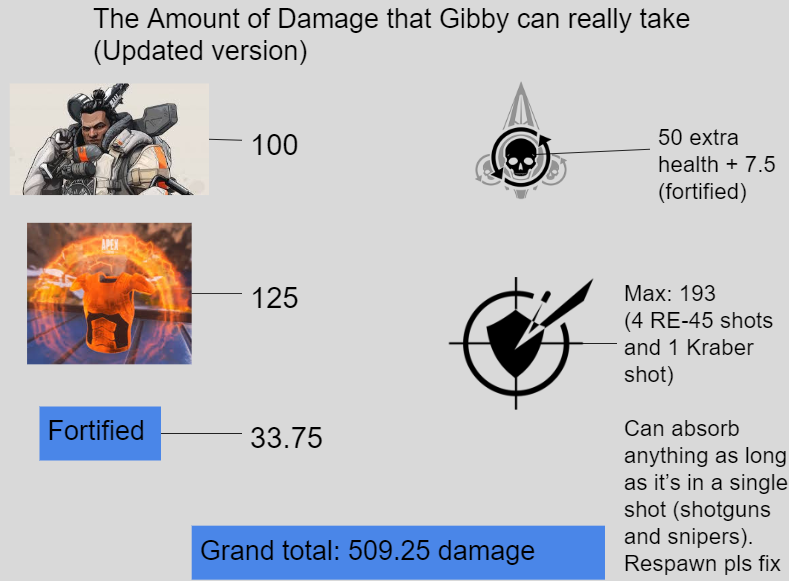 If you’re lucky enough to drop in with a Revenant on your squad, you can also tack on another 50 HP from reviving with the Death Totem ultimate and 7.5 on top of that from Fortified.

Then comes the Gun Shield, which has a listed health of 50, but is capable of blocking basically anything, since shots that break the barrier don’t pass any leftover damage through to Gibraltar.

Four RE-45 shots and one Kraber bullet produce the maximum damage possible to break the shield (193), but not harm to our boy, bringing our grand total to a ridiculous 509.25 damage.

Though Gibby can take a lot of damage, his large model doesn’t serve him well late game.

As we said before, this post is more of a hypothetical situation, but it does a good job of showing just how frustrated some players feel when they encounter the large Legend in a 1v1 situation.

But, in those late game, long-range situations players often find themselves in, the Shielded Fortress can suffer due to his large model, which presents a much bigger target than, say, Wraith or Pathfinder.

However, players are willing to take on that risk knowing that not only is Gibby one of the top-tier characters in terms of what he brings to the table, but he can absorb in incredible amount of damage as well.