An Apex Legends Season 4 hitbox guide shows how big or small some characters hitboxes are – and proves that Octane is actually pretty broken.

Season 4 of Apex Legends was released on February 4, bringing with it a new character in Revenant, a new weapon and some map changes to keep the game feeling fresh and exciting.

Now, a player named GamingMerchant has created a hitbox guide that shows just how big – or small – some characters are, and one character in particular definitely raises some eyebrows.

Octane is a fairly popular character, but may lose some fans after this.

The third biggest is Revenant at 146,946 followed by Mirage at 141,089. On the other end of the scale, Wraith is the only character to not reach 100,000 pixels, at just 95,997 – less than half the size of Gibraltar. Above her are the likes of Bangalore and Pathfinder, who are still relatively small in comparison to the likes of Gibby and Caustic.

However, one thing the guide shows is how broken Octane is, with a hitbox that encapsulates not only his character model but also a concerning area surrounding the head that is quite clearly not supposed to be a part of the character. 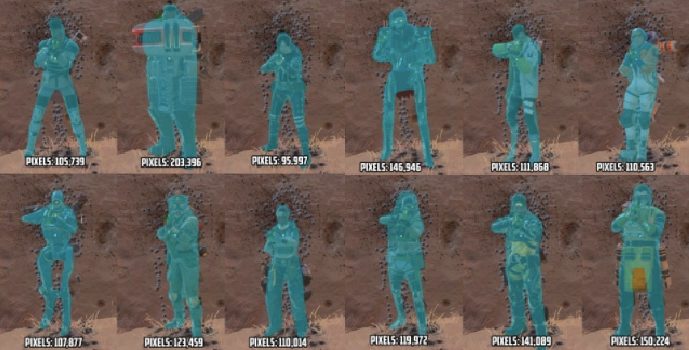 As evidenced in a video GamingMerchant posted to Twitter, you see that often, you can hit Octane around the outside of his head despite the fact that you’re clearly not scoped in on the character model.

He seems to be the only character suffering from this issue in such a way, as all the others’ hitboxes seem relatively tight to their bodies, so it definitely makes us question why Octane is affected in this way.

Some users suggested that this might be due to the size of some of the helmets he wears, making his character model bigger as a result, though this hasn’t been confirmed.

Players who primarily use Octane will be looking at their favorite character with a little more caution now, and we might see a drop-off in players using him since this evidence has come to light.

It’s unclear yet what exactly the reason is, but if Respawn Entertainment sees this they might want to address it sooner rather than later.