Apex Legends: How to unlock “free” Lifeline Heirloom in Fight or Fright

Lifeline’s Heirloom set has finally been released in Apex Legends, and players will have the opportunity to unlock it during the currently ongoing Fight or Fright event.

Fight or Fright launched  on October 15, adding a lot of Halloween-themed content in Apex Legends, including the new Heirloom for Lifeline.

The item is called ‘Shock Sticks,’ a pair of staffs that the support-class Legend can use as a melee weapon.

The Heirloom is currently available for everyone to unlock, but in order to do so, players must first obtain all 24 cosmetic items that were released as part of the event, 12 of which are Epic and 12 Legendary.

In their official announcement for the event, Respawn Entertainment and EA explained that the extremely rare melee skin would technically be “free,” since it would be unlocked without having to spend any money on it directly.

“If you unlock all 24 Fight or Fright Collection Pack Items during the event, you’ll unlock the Lifeline Heirloom set for free,” they wrote. 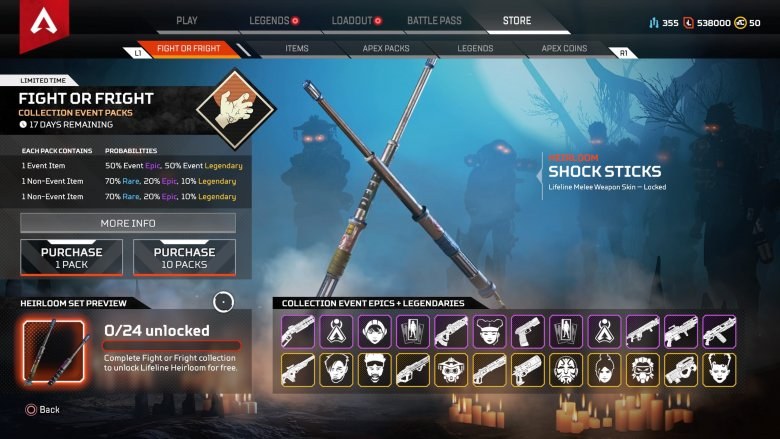 In order to unlock Lifeline’s Heirloom in Apex Legends, you must first unlock the 24 Fight or Fright cosmetic items.
[ad name=”article3″]

There are three main ways you can acquire Lifeline’s Heirloom:

This is the fastest method, but it’s also the most expensive, as you would have to purchase the 24 event items individually.

This method is probably the least worth doing except if you already have a good amount of Crafting Metals laying around that you don’t mind putting towards this.

This is the cheapest method for unlocking the Heirloom. Each Apex Pack costs 700 Coins, and you would only need to open 24 since each of these packs are guaranteed to contain both one event cosmetic and no duplicates.

This option would set you back 16,800 Coins, coming out to about $160, which is still some serious cash to dish out for a single item.

Keep in mind that while it may be tempting to go for the Heirloom right away, there will be a Double XP weekend starting on October 25-28, which will award bonus XP for both finishing winning matches and finishing in the top five.

This would help out in terms of ranking up the Battle Pass, and in turn earning more Coins and Crafting Materials that can go towards unlocking all 24 items. 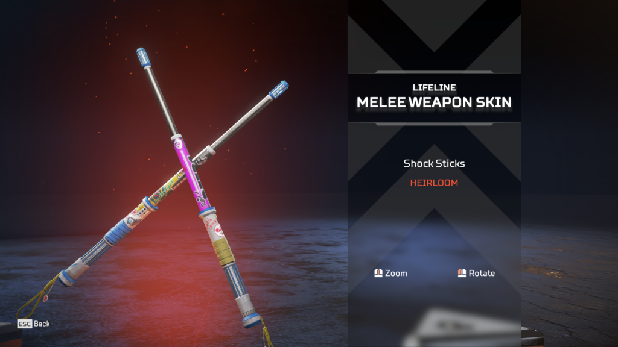 Lifeline’s Shock Stick’s Heirloom is a melee weapon skin that can be used in-game.

Despite this Heirloom’s hefty price tag, which at its lowest is $160, it is still the cheapest and easiest to get compared to Bloodhound’s and Wraith’s sets.

The one for Bloodhound, which was available during the Iron Crown event, cost about $180 to unlock, while Wraith’s set cost an astronomical amount, usually around $500, since it was only released in regular packs and not part of an event.

However, that is what Lifeline’s Heirloom will also start costing once the Fight or Fright event ends on November 5, since the only way to unlock it then would be to try and get it from regular packs.